Acastus is a king of Greek mythology, for Acastus was the king of Iolcus, but Acastus was also a noted hero for he was an Argonaut and a hunter of the Calydonian Boar.

Acastus was the son of Pelias, king of Iolcus, and Anaxibia (Philomache); although Pelias had usurped the throne, taking it from Aeson, the father of Jason.

Acastus would have several siblings, including several sisters, one of whom was Alcestis.  Acastus would grow up as a prince of Iolcus and became more than competent in hunting. 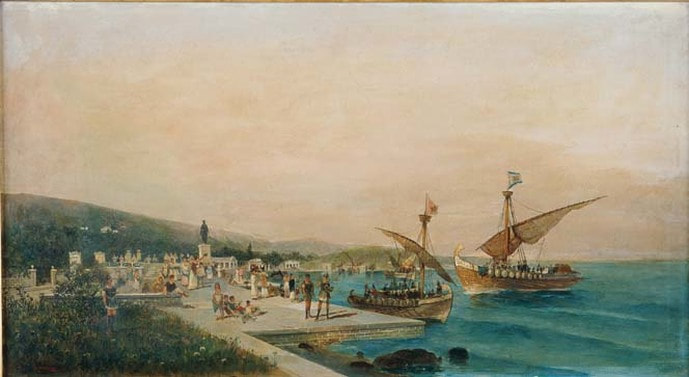 Jason and Medea, the Colchian sorceress, now plotted against Pelias, and with Jason’s father Aeson probably having committed suicide during Jason’s absence, this plotting would lead to the death of Acastus’ father.

Medea would show the daughters of Pelias, including Asteropia and Antinoe, how an old lamb could be rejuvenated into a sprightly lamb by chopping it up and boiling it in a concoction of herbs. The sisters of Acastus were convinced that the same rejuvenation could occur with Pelias, and so the daughters of Pelias killed their father, but Medea did not bring the king of Iolcus back to life.

Upon the death of Pelias, Acastus would become king of Iolcus, despite the fact that Jason was perhaps the rightful king of the city.

For the killing of his father, Acastus would banish his own sisters from Iolcus, and Acastus then sought to punish Jason and Medea, and although the pair had not committed murder themselves, for instigating the death of the king, Jason and Medea were also banished from Iolcus, with the pair travelling together to Corinth.

The Funeral Games of Pelias

​At some point though, Acastus would wed a woman named Astydamia, although others call her Hippolyte, and thus Acastus would become father to three daughters, Laodamia (future wife of Protesilaus), Sterope, and Sthenele (mother of Patroclus).

Astydamia was probably an unfaithful wife for Acastus though, as was displayed when Peleus arrived in Iolcus.

Peleus had of course been an Argonaut alongside Acastus, and also a Calydonian Hunter, but during the hunt for the Calydonian Boar, Peleus had accidentally killed his father-in-law, Eurytion.

Peleus required absolution for this “crime”, the giving of absolution being one of the powers of kings in Ancient Greece; and thus Acastus willingly “forgave” his former comrade.

Peleus’ presence in Iolcus aroused the interest of Astydamia, who now fell in love with the Greek hero, and the queen attempted to seduce Peleus. Peleus was already married to Antigone, daughter of Eurytion, and so rejected the advances of Astydamia. The scorned Astydamia though now went to Acastus and accused Peleus of trying to rape her, and also sent a letter to Antigone, the wife of Peleus, that her husband was about to leave her.

Acastus’ honour meant that he could not simply kill the man he had so recently absolved of regicide, and so Acastus plotted for Peleus to die in some other way.