Hephaestus was the Greek god of metalworking and fire, and was therefore an important deity, so important indeed, that Hephaestus was considered to be one of the 12 deities of Mount Olympus.

Hephaestus was rescued from drowning by the Oceanid Eurynome and the Nereid Thetis, and was taken to the island of Lemnos, but grew up not knowing where he came from.

Hephaestus Son of Hera and Zeus

Despite being the more famous story, it was actually more common in antiquity to name Hephaestus as the son of Zeus and Hera.

Possibly, Hephaestus cut Hera out of the golden chains that Zeus had bound her in, holding her between heaven and earth. One reason given for the confinement of Hera was perhaps because she had had Hypnos put Zeus into a deep sleep so she could enact some revenge upon Heracles.

For his intervention, Hephaestus was thrown by Zeus off of Mount Olympus; and fell to earth, following a fall lasting one day, onto the island of Lemnos. The fall from Mount Olympus would not kill the god, but the landing did perhaps cripple him, causing the lameness with which Hephaestus was often depicted.

Some ancient sources suggest that Hephaestus was actually thrown out of Mount Olympus on more than one occasion.

On the island of Lemnos, Hephaestus was cared for by the local Sintian tribe. Hephaestus learned how to be a great craftsman and setting up his first forge upon the island, soon he was making beautiful jewellery, including pieces crafted for Thetis and Eurynome.

The Revenge of Hephaestus

At the same time, Hephaestus was also plotting. Some tell of how Hephaestus was seeking information about his parents, whilst others tell of him seeking revenge upon Hera for either rejecting him, or else not protecting him from Zeus, but in any case Hephaestus crafted an elaborate golden throne, which he had transported as gift to Mount Olympus.

As soon as Hera sat upon the throne, the chair engulfed her, and the goddess was unable to rise up from her seat. Now at any other time, the entrapment of Hera would have brought no great reaction from the other gods, but the powers of the goddess were in demand, and so Hephaestus was asked to come to Mount Olympus to release his mother.

Hephaestus though, refused to leave Lemnos, and would not tell of how Hera could be released.

Eventually it was left to Dionysus to bring Hephaestus to Mount Olympus, something the Greek god of the vine did, not by force, but making Hephaestus intoxicated and then lugging him to the home of the gods upon the back of a mule. 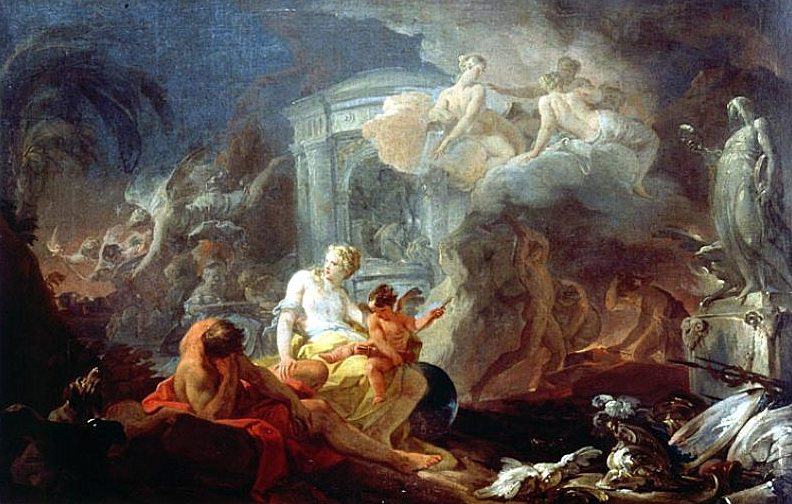 When sobered up, Hephaestus did agree to actually release Hera, possibly because Zeus bribed him with the promise of a prominent role upon Mount Olympus, and also the promise that Aphrodite, the Greek goddess of Beauty and Love, would be his wife.

The promise of Aphrodite was enticing for Hephaestus, after all she was arguably the most beautiful of goddesses, and a marriage between the pair would suit Zeus, for it should prevent others from chasing the goddess of beauty. Aphrodite though, was not particularly enamoured in being married to the ugly Hephaestus.

Ares and Aphrodite would be released from the net after Ares agreed to pay a “fine”, but the tryst saw Aphrodite falling pregnant with the goddess Harmonia. Some sources suggest that Aphrodite and Hephaestus were subsequently divorced.

Hephaestus would have some more revenge on his cheating wife, for Hephaestus crafted a cursed necklace, the necklace of Harmonia, which brought tragedy to all those who subsequently possessed the necklace.

Lovers and Children of Hephaestus

Hephaestus also had lovers where his forges were located, so on Lemnos, Hephaestus would consort with Cabeiro, a sea-nymph daughter of Proteus. Cabeiro would give birth to two sons, the Cabeiri, who were revered as metalworking gods. This relationship also brought forth the Cabeirides, nymphs of Samothrace.

On Sicily, Hephaestus’ lover was Aetna, another nymph, who gave birth to the Palici, gods of the geysers of Sicily, and perhaps also Thalia, a nymph.

The most famous son of Hephaestus was probably Erichthonius, the man who became king of Athens. Hephaestus sought to have a relationship with the beautiful Athena, but the goddess spurned his advances. When Hephaestus tried to force himself on the goddess, he ejaculated upon the thigh of the goddess, who subsequently brushed the semen away. The semen fell onto Gaia, the earth, who became pregnant, and so was born Erichthonius.

Other mortal sons of Hephaestus also included, King Olenos, Ardalos, the inventor of the flute, Peophetes, the bandit, and Palaemonius, the Argonaut.

The Works and Workshops of Hephaestus

Mortals also benefited from the work of Hephaestus, and Hephaestus also built palaces for various kings, including Aeetes, Alcinous, and Oenopion.

Heracles also received a quiver made by Hephaestus, as well as the bronze clappers used by the heroes to scare away the Stymphalian birds.

Pelops would also benefit from gifts made by Hephaestus, for it was the god who made the shoulder bone, to replace the one accidentally eaten by Demeter. Pelops also received a royal sceptre crafted by the god, a sceptre which eventually be owned by Agamemnon.

Hephaestus is closely linked with the story of the Titan Prometheus for when the Titan stole the secret of fire to give to man, it was from the forge of Hephaestus upon Mount Olympus that it was taken.

Hephaestus was thereafter closely linked to the punishment of man and Prometheus, for Hephaestus was said to have crafted Pandora, the first women, who brought suffering upon man, and it was also Hephaestus who chained Prometheus to the Caucasus Mountains as part of the Titan’s punishment.

Hephaestus and the Trojan War

Again though, Hephaestus also had cause to help the Trojans for the god rescued Idaios, the son of the priest of Hephaestus Dares, when it looked like Diomedes would strike down Idaios, just as he had done with his brother, Phegeus. ​
Hephaestus was also a prominent fighter during the Gigantomachy, the war of the giants, and it was said that he, as well as Dionysus, first rode onto the battlefield upon the backs of asses, and the braying of the asses initially put the Gigantes to flight. During the war it was also said that Hephaestus killed the giant Mimas by pouring molten iron onto him.

When Typhon attacked Mount Olympus though, Hephaestus did not stand and fight, and like most other Olympian gods turned and fled to Egypt. In Egypt Hephaestus would become known as Ptah.

When Typhon was eventually defeated by Zeus, it was said that Typhon was buried beneath Mount Etna, and Hephaestus thereafter acted as a guard, ensuring the dangerous giant could not escape.

The Favour of Hephaestus

The Olympian gods were known to be quick to anger, but the anger of Hephaestus was normally directed at other gods and goddesses, whilst he was more sympathetic to mortals.

Pelops, the son of Tantalus, with a bone in his shoulder crafted by Hephaestus, came to the god for absolution, having killed the charioteer Myrtilos, in order to win the hand of Hippodamia and the throne of Pisa.

Hephaestus was also sympathetic to the plight of the hunter Orion, after Orion had been blinded by King Oenopion. So, Hephaestus loaned Orion one of the god’s helpers, Cedalion, to guide him to Helios, so that the blind Orion might see once again.

Hephaestus and the Birth of Athena