Maia was one of the seven Pleiades spoken of in Greek mythology. Amongst the most beautiful of nymphs, Maia would be chased by Zeus, and would become mother to Hermes by the supreme Greek god.

​Maia was one of the seven daughters of the Titan Atlas and the Oceanid Pleione, making Maia a Pleiades nymph. The seven Pleiades were Maia (the eldest), Electra, Alcyone, Taygete, Asterope, Celaeno and Merope.

Maia was, like the other Pleiades, a sister to the five Hyades, and she would also have brother in the form of Hyas. 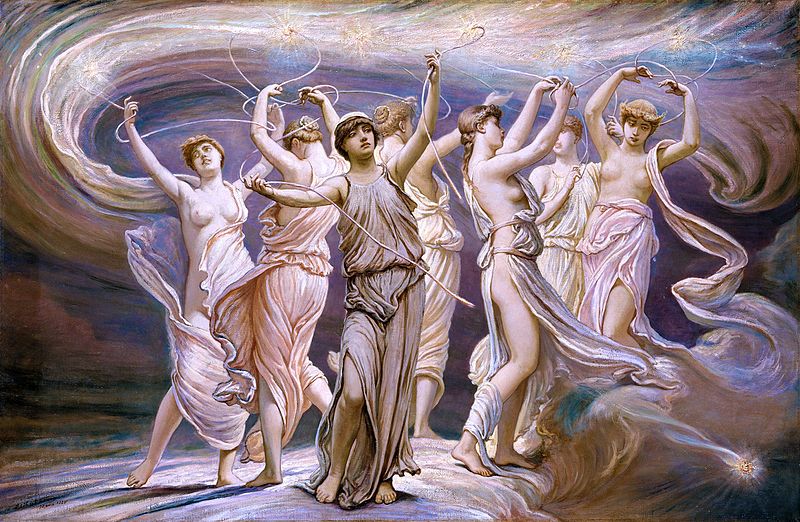 ​Maia and her sisters were originally called mountain nymphs, for they resided upon Mount Cyllene, and their role was to act as virgin attendants to Artemis. The beauty of the Pleiades soon attracted the attention of many of the male gods, and as the most beautiful, it was Maia who Zeus lusted after.

Maia would attempt to escape the advance of Zeus, by hiding away in a cave upon Mount Cyllene, but there she was no escape when Zeus found her in the cave, and Zeus had his way with her, perhaps, as Maia slept.

Maia would be named as Greek goddess of nursing mothers, making Maia one of a number of goddesses associated with motherhood in the Greek pantheon, alongside the likes of Leto and Tethys. The esteem of Maia was such that her name was still relevant in the Roman period, giving rise to the month of May in the English language.

Maia would appear in her role of a mother goddess in the story of Arcas. Arcas was a son of Callisto, born to Zeus, but Hera would have Callisto transformed into a bear, and Zeus had to ensure that his son was put somewhere safe. Thus, Zeus charged Hermes with taking Arcas to Maia, and the Pleiades nymph subsequently raised the son of Zeus.

As part of the Pleiades sisterhood, Maia was also involved in the story of Orion the hunter. For it was said that Orion wished to sleep with each of the Pleiades.

Artemis was said to have intervened to protect her attendants, and requested Zeus to prevent Orion from take advantage of Maia and her sisters. Zeus would firstly transform the nymphs in doves, but the tracking skills of Orion was such that he even managed to follow them when they flew away.

Zeus therefore transformed the seven sisters into stars, becoming the Pleiades cluster of stars, part of the Taurus constellation, but even in the night sky Orion still chases after the Pleiades.

Later mythological tales about Maia and her sisters have the Pleiades not in the night sky for the descended from the heavenly position to earth, to mourn alongside the Horai and Eos, upon the death of Eos’ son Memnon during the Trojan War.
Contents