Aeacus might not be a well-known name today, but the name relates to one of the plethora of kings from Greek mythology, and indeed, Aeacus was a prominent king and a relatively important one. For Aeacus was a son of Zeus, a king of Aegina during his life, and one of the Judges of the Dead in the afterlife.

To separate Aegina from her father, Zeus transformed himself into an eagle, swooped down upon Aegina, and whisked her away to the island of Oenone in the Saronic Gulf.

Now, initially Asopus was unaware of the abduction of Aegina, but was told of the actions of Zeus by Sisyphus (this being one of Sisyphus’ many misdemeanours). But even with the news of Aegina’s abduction, Asopus could do little, for even as the Potamoi approached the island of Oenone, so Zeus threw down thunderbolts to dissuade the river god.

Zeus would have plenty of time to consummate a relationship with Aegina, and so of course a son was born to the Naiad, this son being Aeacus. Zeus would decree that the island of Oenone would be known as Aegina in honour of the water nymph.

Aegina would subsequently be married off to a prince of Phocis called Actor, and amongst her other offspring was Menoetius, a named Greek hero, and one who sailed on-board the Argo.

Aeacus and the Ants

In a second version of the tale, Aegina was once populated, but Hera sent forth a plague which killed off the island’s entire population, save for Aeacus; Hera seeking revenge for her husband’s affair. To repopulate the island, Zeus would thereafter transform the ants into a new generation of people.

Aeacus would subsequently appear in a number of different mythological tales.

Famously, Aeacus would be one of the companions of the Olympian gods Poseidon and Apollo during their exile amongst men. Zeus had exiled his brother and son for plotting against him, and so the two gods were forced to undertake menial work for others.

At one point the company of god and men would find themselves in the city of Troy, where King Laomedon would employ them. Apollo would tend the livestock of the gods, whilst Poseidon would build Troy some new city walls, and Aeacus would assist in the building of the walls of Troy.

When the party sought their wages for their work, Laomedon decided not to pay for the work, and in retribution a plague was sent down upon the city, and a sea monster, the Trojan Cetus, would ravage the beach side.

Troy would only be freed of the plague and monster when Heracles arrived in the region; but once again Laomedon refused to pay for the effort of Heracles. So Heracles besieged the city of Troy, and when the walls were breached it was said that Telamon was the man to breach the wall at a point that his father had constructed.

Aeacus Judge of the Dead

The story of Aeacus continued though for in recognition of his fairness as king, Aeacus would be made immortal, and would forever sit in judgement upon the dead. Aeacus would therefore sit with King Minos and King Rhadamanthys in the Underworld, to decide upon the eternal fate of all the deceased, with perhaps Aeacus judging the dead of Europe. 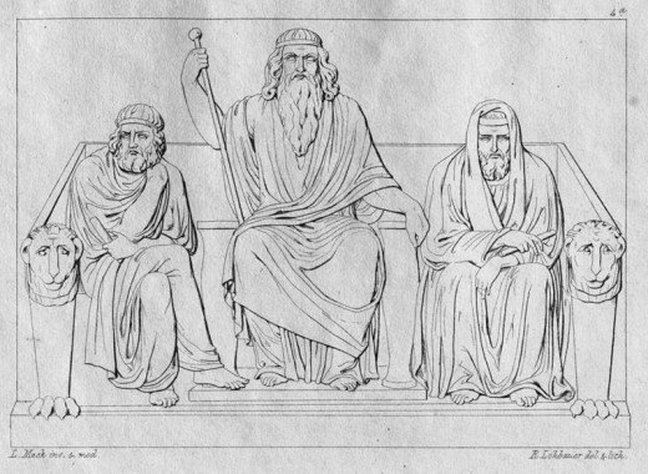