THE GODDESS HEBE IN GREEK MYTHOLOGY

Despite the passing of many hundreds of years the names of many Greek deities and heroes are well-known today, but at the same time, for every recognisable name from Greek mythology, there are a dozen more names that are unknown. The Greek goddess Hebe is one such name.

The Roles of Hebe 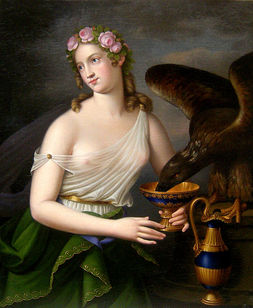 Hebe and Zeus - Louis Fischer (1784 Paris - 1845 Schwerin) - PD-art-100
In Greek mythology Hebe was primarily regarded as the Goddess of Youth, or more particularly, the Goddess of Eternal Youth. This though, was just one of a number of roles undertaken by the Greek goddess.

Hebe was one of the goddesses of the wedding ceremony, and so Hebe would accompany the likes of Hera, Harmonia and Aphrodite to such ceremonies.

A more menial role for Hebe came with the fact that she was also an attendant to both Hera and Ares. Hebe would ensure that the chariot of Hera was prepared in preparation for her mother's use; and she would also bathe and dress her brother Ares.

Hebe's most famous role though was cup-bearer to the gods, and on Mount Olympus she would serve the ambrosia and nectar to the other gods. Hebe would ultimately be replaced in this role when her father abducted Ganymede, and made the Trojan prince the cup-bearer. Although Hebe would return to her previous role during the Trojan War when Ganymede was too upset to continue. 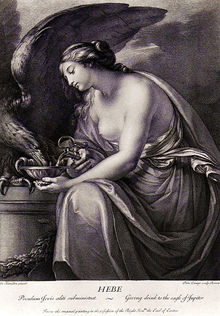 Hebe Serving Nectar - Domenico Cunego - PD-art-100
Hebe might have willingly given up her role as cup-bearer though, for she was destined to marry Heracles when the Greek hero was deified on his funeral pyre. Hebe's mother Hera was a lifelong enemy of Heracles, but the deification was a reward for the hero's role in the Gigantomachy, and reconciliation occurred between Hera and Heracles, allowing the wedding to go ahead.

Hebe and Heracles lived together upon Mount Olympus, and Hebe would give birth to two twin sons for Heracles, the minor gods, Alexiares and Anicetus. These two sons, along with Heracles, would be regarded as the physical protectors on Mount Olympus.

Arguably though, as the daughter of Zeus and Hera, and the wife of Heracles, should be more famous than she is, but even antiquity she was normally depicted alongside her mother or husband.