Chiron was the wisest of centaurs in Greek mythology. A friend to many famous heroes, Chiron would also act as tutor to many of the most famous figures from Greek myths.

To explain the difference between Chiron and other centaurs it was said that Chiron had different parents than most other centaurs, for whilst most were considered the children of Ixion and Nephele, Chrion was named as a son of the Titan Cronus and the Oceanid Philyra. In mating with Philyra, Chiron took the form of a steed, hence why his child was born a centaur.

Being the son of the supreme deity of the day, Cronus, also ensured that Chiron was regarded as immortal.

This marriage was said to have brought forth a number of offspring. One child was the daughter Melanippe, also known as Ocyrrhoe, who after being seduced by Aeolus, was transformed into a mare so that her father would not know that she was pregnant. Although, some tell of her transformation being a punishment after she went too far in using a prophetic abilities to reveal the secrets of the gods.

A son, named Carystus, was also born, with Carystus being regarded as a rustic god associated with the island of Euboea.

It was also said by some that Chiron was father to Endeis by Chariclo, although some name the father as Sciron. Endeis was famously the first wife of Aeacus, and mother of Peleus and Telamon.

Additionally, an unspecified number of nymphs were also born to Chiron and Chariclo, these nymphs being named the Pelionides.

At the marriage of Peleus and Thetis, Chiron was amongst the guests, and the centaur presented to Peleus a spear made from ash, which had been polished by Athena and given its metal point by Hephaestus. This spear would later be owned by the son of Peleus, Achilles.

Achilles would be a famous student of Chiron, for when Thetis fled from Peleus’ palace, having been discovered trying to make her son immortal, Achilles was sent to Chiron to be raised, and as Chariclo acted as foster mother, Chiron taught Achilles in medicine and hunting. 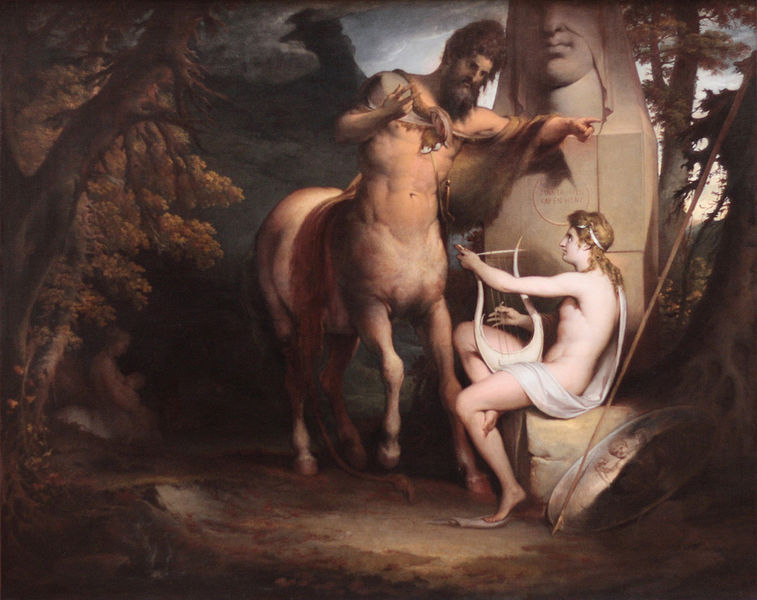 The Students of Chiron

Patroclus, the lifelong friend of Achilles, was also tutored by Chiron at the same time as the son of Peleus, as perhaps was the cousin of Achilles, Telamonian Ajax. It is also said by some sources that the most famous of all Greek heroes, Heracles was also tutored by Heracles, although is not universally agreed  upon, but cert ainly Heracles was involved in the death of Chiron. 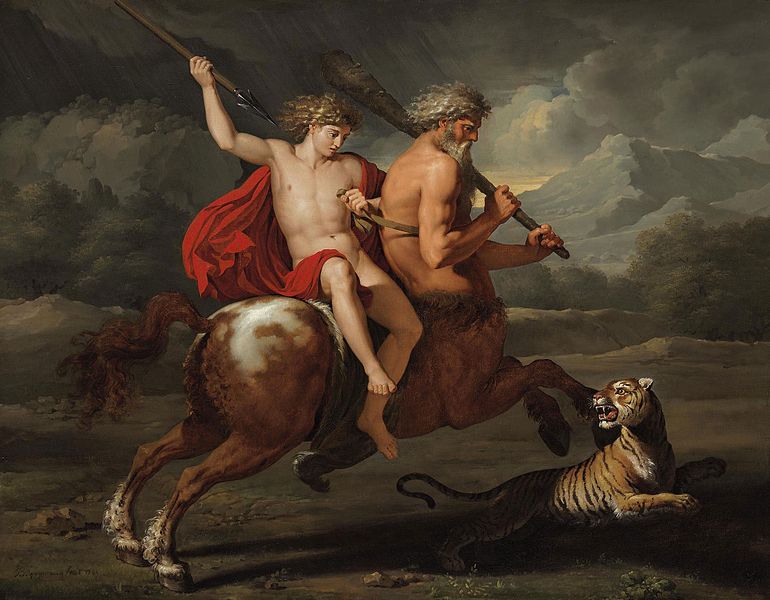 The Death of Chiron

​Now Chiron was said to be immortal, and yet still he died.

Heracles was being hosted by another civilised centaur Pholus, when the opening of a jar of wine attracted all the savage centaurs to Pholus’ cave. Heracles was forced to fight the wild centaurs off, and in the end he unleashed many of his poisoned arrows.

One such arrow passed through the arm of the centaur Elatus and entered the knee of Chiron. The poison of the Hydra was sufficient to kill any mortal, and indeed an arrowhead accidentally caused the death of Pholus, but Chiron was not a mortal, and so rather than dying, Chiron was wracked with unbearable pain.

Even with Heracles helping, Chiron was unable to cure himself, and for nine days Chiron suffered the pain. Then realising that there was but one way to end the pain, Chiron asked Zeus to remove his immortality, and taking pity on his kin, Zeus did so, and so Chiron died from his wound, and was subsequently placed amongst the stars as the constellation Centaurus.

Now some tell of how it was Heracles who went to his father to arrange for Chiron to give up his immortality, and in doing so struck a deal whereby Chiron died, and Prometheus was released from his eternal torture and imprisonment; although it is not exactly clear as to why Zeus would agree to such a deal, aside from the fact that Heracles was his favoured son.
Contents