Philoctetes is the name given to a hero of Greek mythology; a Greek hero who was a Suitor of Helen, a fighter at Troy, and one of those Achaean heroes who hid within the Wooden Horse. In antiquity though, Philoctetes was far more famous than he is today.

Philoctetes was the son of Poeas and his wife Demonassa (or Methone).

​Poeas was king of Meliboea in Thessaly, but he is more famous as a hero than a king, for Poeas was often named as one of the heroes who sailed on the Argo with Jason.

Philoctetes or His Father

​Other versions of the myth tell of the funeral pyre being lit by Poeas, an old comrade of Heracles, for both had been Argonauts, and it was from his father, that Philoctetes inherited the bow and arrows of Heracles.

Alternatively, Philoctetes was not a passer-by, but was already a companion of Heracles, and his armour bearer, who had been with the hero when he was poisoned.

Poeas had been a fine archer, indeed the finest amongst the Argonauts, and he would pass on his knowledge and skill to Philoctetes, but Philoctetes’ skill would far outstrip that of his father, and by the time he was of age Philoctetes, was known as amongst the top archers of the ancient world.

It was therefore only natural that when news came that Helen, the stepdaughter of King Tyndareus of Sparta, was accepting marriage proposals, Philoctetes set out for Sparta; and there, Philoctetes would become one of the Suitors of Helen.

In Sparta, Philoctetes would also be one of the heroes who took the Oath of Tyndareus, prior to the new husband of Helen being chosen.

​The Oath was designed to prevent bloodshed amongst the Suitors, but it also made those who swore the oath, honour bound to protect the man chosen. Philoctetes was ultimately unsuccessful in winning the hand of Helen, for Menelaus was chosen.

Later, of course, Helen was abducted and all those who had taken the Oath of Tyndareus were called to arms to retrieve her from Troy.

​Thus, when the fleet gathered at Aulis, Philoctetes was in charge of seven ships combining troops from Meliboea, Methone, Olizon and Thaumacia, and Philoctetes was named as one of the Achaean leaders.

When the ships of Philoctetes arrived at Troy though, they were no longer under his control, for Medon, half-brother of Ajax the Lesser, was now in command, and Philoctetes was no longer with the Achaean force, for he had been left behind upon Lemnos (or Chryse, or Tenedos). 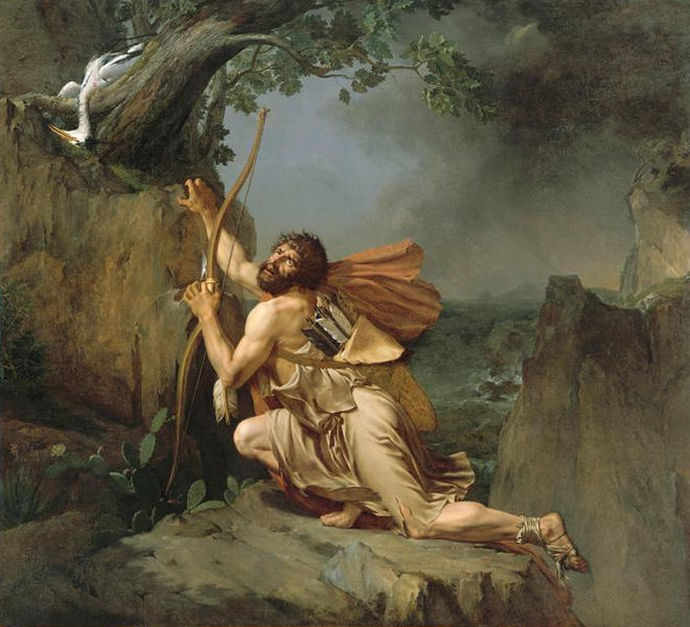 No matter what the cause of the snake bite, Odysseus persuaded Agamemnon and Menelaus that Philoctetes should be left behind, for there was little doubt that the hero would die from his wound.

Philoctetes of course did not die, and although in pain, he was able to kill food to eat through his skill with the bow, and some tell of how Euneus, King of Lemnos and son of Jason, aided the Greek hero. ​

The Achaeans who arrived on Lemnos expected to simply take the bow and arrows of Heracles from where they lay, next to the body of Philoctetes, but of course, Philoctetes was not dead, and now they were faced with trying to convince a man they had abandoned to help them.

Some tell of Odysseus actually tricking the weapons out of the hands of Philoctetes, but it was also said that Diomedes refused to take the weapons and leave the man behind.

Diomedes might have been able to convince Philoctetes to return with him to Troy, but it was also said that it was only when Heracles, now a god, appeared, that Philoctetes agreed to go to Troy. 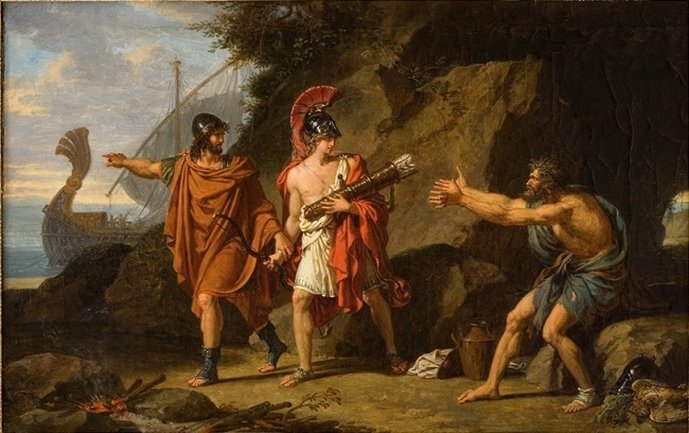 Salvation for Philoctetes as at hand upon the Troad, for the sons of Asclepius, Machaon and Podalirius, were present in the Achaean camp. Machaon and Podalirius had many of the skills of their father, and they would cure the hero of his wound; though this does beg the question of why the wound was not originally healed upon Lemnos.

A lesser told version of the Philoctetes myth, has the Greek hero cured of his wound before the return of Diomedes and Odysseus, for Pylius, a son of Hephaestus, and the priests of Hephaestus, upon Lemnos, had healed Philoctetes.

In this version of the tale Philoctetes and Euneus had already undertaken much fighting, conquering islands near to Lemnos that had been settled by Carians.

Philoctetes After the Trojan war

Despite being guiltless, Philoctetes struggled to return home, but eventually the Greek hero did return to his kingdom, but like so many other Greek leaders, he found that he was no longer welcome in his own homeland.

​Rather than attempt to retake his kingdom though, Philoctetes travelled onwards settling in the area known as Magna Graecia on the Italian Peninsula, where he was said to have founded the cities of Macalla, Petelia and Crimissa.

In Crimissa, Philoctetes was said to have constructed a temple to Apollo where he laid up his famous bow and arrows.

In antiquity the death of Philoctetes was never recorded, but in the 12th century AD, the Byzantine poet John Tzetzes told of the hero’s demise as he fought alongside Rhodian colonists in a local war.
Contents