THE CENTAUR PHOLUS IN GREEK MYTHOLOGY

​Pholus was the name given to a centaur within the tales of Greek mythology. Generally speaking, centaurs were considered to be savages, but amongst their number were named two civilised individuals, Chiron and Pholus.

The Attack of the Centaurs

​The quality of the wine could not be questioned by Heracles, but the aroma of the wine drifted out of Pholus’ cave, attracting all of the other wilder centaurs.

These centaurs tried to force their way into the cave of Pholus, but in front of them, barring the way stood Heracles, and taking up his weapons, Heracles drove the centaurs back. Heracles then took up his bow, and soon arrow after arrow was finding its marking, killing many centaurs.

Those centaurs that were untouched by the arrows fled, with Heracles in pursuit, with Heracles potentially pursuing them all the way to Mount Pelion. 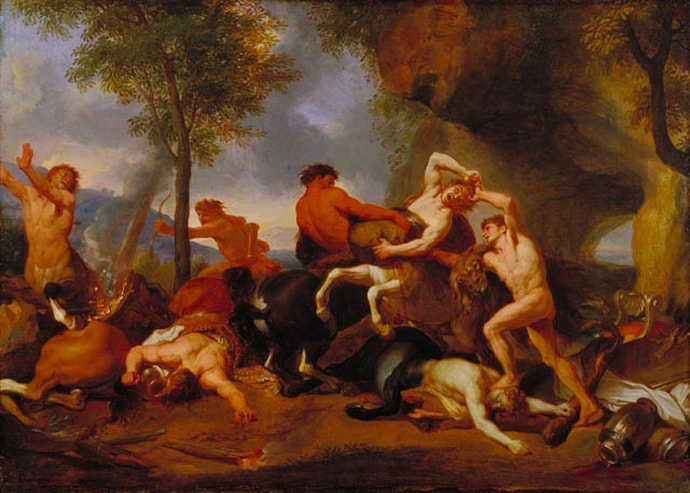 The Death of Pholus

Pholus would emerge from his cave to see many centaurs lying dead about him, and as was his civilised nature, Pholus decided to bury them.  As he did so, Pholus would examine one of the arrows that had killed them, but as he did so, Pholus dropped the projectile, whereupon it fell tip first onto his foot, and so the blood of the Lernaean Hydra entered his body, killing Pholus.

Subsequently, Heracles would return to Mount Pholoe, and there discovered the body of Pholus. To honour the centaur who had welcomed him as a guest, Heracles gave the centaur a celebrated funeral, and buried Pholus at the foot of the mountain that bore his name.