Peleus was a noted hero of Greek mythology, for Peleus was a hero who was a Hunter of the Calydonian Boar and also an Argonaut, and yet his own fame has been overshadowed by that of his son, for Peleus was the father of Achilles.

Peleus was a prince of Aegina for he was the son of King Aeacus of Aegina, born to the king’s wife Endeis. Thus, Peleus is also commonly said to have been brother to another noted hero, Telamon.

Later on, Peleus would also gain a step-brother for Aeacus would take a mistress in the form of the Nereid Psamathe, and from this relationship was born a third son for Aeacus, a son called Phocus.

Phocus quickly became the favoured son of Aeacus, and the royal court was full of jealousy, for Endeis was jealous of Psamathe, and Telamon and Peleus were envious of Phocus, especially because Phocus exceeded their own athletic skills.

Peleus and the Death of Phocus

The kings of Ancient Greece had the power to absolve individuals of their crimes, and thus Eurytion absolved Peleus for any wrongdoing in the death of Phocus.

Peleus would be a very welcome guest in Phthia, and Eurytion was so taken with the son of Aeacus that Eurytion married his own daughter Antigone to Peleus, and then gave his new son-in-law a third of his kingdom.

Potentially the marriage of Peleus and Antigone brought forth one daughter, Polydora, who some call the mother of Menesthius, although Polydora is also named a second wife for Peleus.

Whilst in Phthia news came forth of the gathering of heroes at Iolcus, as Jason was assembling together a band of heroes to voyage to Colchis to acquire the Golden Fleece. Peleus and his father-in-law would both journey to Iolcus, where Jason welcomed them both as new Argonauts.

Peleus is joined on-board the Argo by Telamon, for Peleus’ brother has also taken up with the heroic quest. During the voyage to and from Colchis, Telamon is portrayed as a critic of Jason, whist Peleus is a counsellor, guiding Jason through the trials and tribulations of the quest.

During the story of the Argonauts Peleus is often the individual, rather than Jason, who rallies together the assembled heroes, and it was also Peleus who solved the problem of getting The Argo across the deserts of Libya.

Peleus and the Calydonian Boar

The throne of Iolcus had passed from Pelias to his son Acastus, a man who had travelled with Peleus on-board the Argo. Acastus would welcome his former comrade, and immediately absolved him of his crime, but Peleus would soon find his stay in Iolcus fraught with danger.

Astydamia, the wife of King Acastus would lust after Peleus, but Peleus shunned the queen’s advances; a rejection which raised great anger in the queen. In retribution, Astydamia would send word to Antigone, Peleus’ wife in Phthia, that Peleus was to wed one of the daughters of Acastus; this news would cause Antigone to kill herself through grief.

Astydamia then also told her husband Acastus that Peleus had attempted to rape her.

Acastus believed Astydamia, but the new king was unwilling to act against a guest, and the man who he had so recently absolved of his crime; so instead, Acastus devised a plan which would see Peleus killed at the hands of another.

Now a widow, Peleus would soon find himself another wife, for Zeus plotted and planned, so that Peleus would wed the Nereid Thetis.

Peleus was chosen as the lucky husband of Thetis, although Thetis herself was not enamoured with the idea of marrying a mortal, and indeed Thetis fled from the advances of Peleus.

Peleus though was advised by the sea god Proteus, or the centaur Chiron, about how Peleus could capture Thetis and make the Nereid his wife. Thus, Peleus would capture Thetis, and tied her up, so no matter what shape the Nereid transformed herself into, Thetis could not escape the clutches of Peleus. Eventually the captive Thetis agreed to become the wife of Peleus. 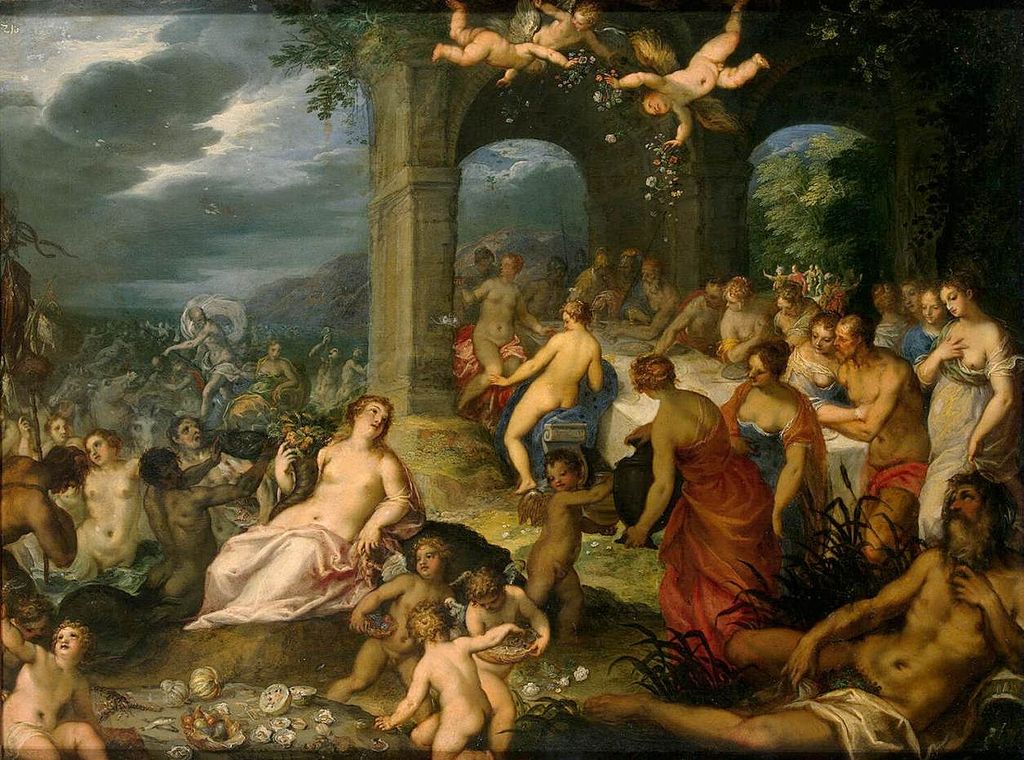 The wedding of Peleus and Thetis was one of the great gatherings of Greek mythology, and to the wedding feast all the gods and goddesses were invited, that was all the goddesses bar Eris, the goddess of Strife. 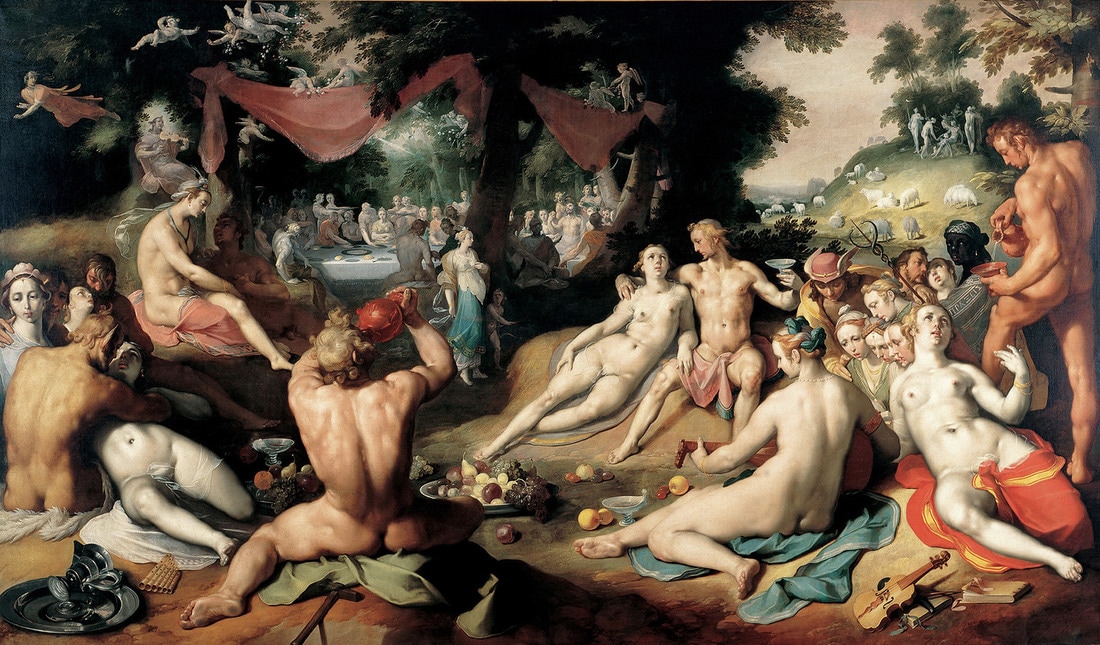 The Marriage of Peleus and Thetis

Thetis had neglected to tell Peleus her plans for Achilles, and so when Peleus discovered Thetis holding Achilles over a fire, Peleus reacted angrily. Thetis would leave the palace of Peleus with her plan unfinished, returning to the underwater realm of her father, whilst Peleus was left to care for Achilles.

Peleus would pass care for the youthful Achilles onto Chiron, for the centaur was a tutor to many noted heroes, and thus Achilles was tutored in the ways of the hero.

For a while the story of Peleus fades into the background, for the short but triumphant life of his son Achilles overshadows it. Indeed, it would be Achilles who led the forces of Phthia during the Trojan War, not Peleus, although it was Achilles’ son, and Peleus’ grandson, Neoptolemus who would end the war in charge of that force.

Peleus would of course lose his son Achilles during the Trojan War, and it was also said that he lost his kingdom of Phthia, for Acastus, or the sons of Acastus, rose up against him.

Peleus though, might have regained his kingdom after the end of the Trojan War for Neoptolemus hurried home after the war, and perhaps assisted in the regaining of Phthia.

The Last Heroic Act of Peleus

During an absence of Neoptolemus from Epirus, Hermione plotted with her father Menelaus to do away with Andromache, and thus Andromache and her sons were threatened with death.

Peleus though would arrive in Epirus, and act as a protector for Andromache and his great-grandsons, and Menelaus and Hermione were thus thwarted in their plans.

Peleus would die shortly afterwards though, for word would reach the hero that his grandson Neoptolemus had been killed by Orestes, and it was said that Peleus then died of grief.

It would be expected that the achievements of Peleus were sufficient to find the hero in Elysium, the paradise element of the Greek afterlife.

Some tell though, of how Peleus was actually transformed into an immortal by Thetis before his death, and husband and wife were reunited, with the pair living together in the palace of Nereus beneath the sea.