THE CAUCASIAN EAGLE IN GREEK MYTHOLOGY

The eagle was an important symbol within Greek mythology, for it was the sacred creature of Zeus, and the supreme deity of the Greek mythology was known to transform into one, when he abducted Aegina for example, and also to make use of them, with eagles known to carry the god’s thunderbolts.

The Caucasian Eagle though was not a normal eagle, despite being used by Zeus, and the Caucasian Eagle had a specific name, Aetos Kaukasios; and many ancient sources, including the Theogony (Hesiod), the Bibilotheca (Pseudo-Apollodorus), Argonautica (Apollonius Rhodius), and Prometheus Bound (Aeschylus) make reference to the bird.

The Origins of the Caucasian Eagle

The Caucasian Eagle received its name because its range was in the Caucasus Mountains, just as the Nemean Lion was to be found in Nemea, and the Lernaean Hydra in Lerna.

The Punishment of Prometheus

The Caucasian Eagle comes to prominence in Greek mythology because of the role it played in the punishment of Prometheus, a punishment meted out to the Titan by Zeus.

Prometheus had been the benefactor of man following the Titanomachy, and having created mankind from clay, had imbued it with skills and abilities taken from the Olympian gods, before stealing the secret of fire from the workshop of Hephaestus.

Having then taught mankind how to get the best from the sacrifices made to the gods, the anger of Zeus overflowed, resulting in punishment for the Titan. 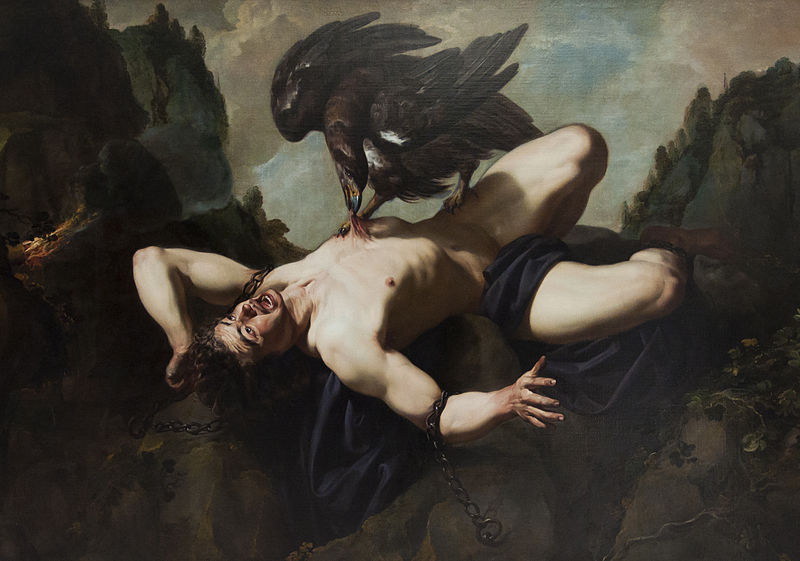 Prometheus - Theodoor Rombouts (1597–1637) - PD-art-100
In his life, Heracles had killed many monsters, but in the case of the Caucasian Eagle, Heracles did not blindly attack the bird, and, knowing that it was acting on the instructions of his father, Heracles sought permission from Zeus to bring the punishment of Prometheus to an end.

Zeus realised that the actions of Heracles would heighten his standing amongst men and gods alike; leading ultimately to the apotheosis of his favoured mortal son.

The Death of the Caucasian Eagle