THE SEER CALCHAS IN GREEK MYTHOLOGY

Calchas was one of the most famous and important seers from Greek mythology. Calchas was the primary seer of the Achaean forces during the Trojan War, providing guidance and counselling to Agamemnon.

Calchas was the son of another seer, Thestor, possibly by a woman named Polymela, making Calchas brother to Theoclymenus, Leucippe and Theonoe. The family line of Calchas made him a great-grandson of the god Apollo, hence the prophetic power of Calchas.

Agamamnon Seeks out the Seer Calchas

Even before the arrival of Agamemnon Calchas, had by this time, already made his first prophecy concerning the upcoming Trojan War, for the seer stated that the Trojans would not be bested unless Achilles fought for the Achaeans. This prediction would see Odysseus go to the court of King Lycomedes on Skyros to find the hidden Achilles.

The next important prophecies of Calchas occurred at Aulis, where the Achaean forces were gathering.

The first saw Calchas predict how long the forthcoming Trojan War was to last. Calchas observed a serpent eating eight baby sparrows followed by their mother, after which the serpent itself turned to stone. Seeing 10 different creatures involved in the event, Calchas predicted that 10 years of war was to follow.

Ten years of fighting was not something that the Achaean leaders wished to hear, but the second prediction made by Calchas was even more unpalatable.

Calchas and the Sacrifice of Iphigenia

With the Achaean fleet ready to set sail for Troy, ill winds kept the fleet at anchorage. These ill winds were probably sent by the goddess Artemis, with Agamemnon normally blamed for angering the goddess.

It was Calchas who informed Agamemnon that the winds would not become favourable until the fairest of Agamemnon’s daughters, Iphigenia, was sacrificed to the goddess. Now whether Agamemnon was willing to go along with the pronouncement of Calchas, or not, matters little, for Clytemnestra and Iphigenia would be summoned to Aulis, and eventually Iphigenia ended up on the sacrificial table. Then Calchas was tasked with committing the killing blow to the daughter of Agamemnon. Calchas was perfectly willing to undertake the sacrifice, although in many tales, Artemis rescued Iphigenia before she died, substituting a deer in her place. 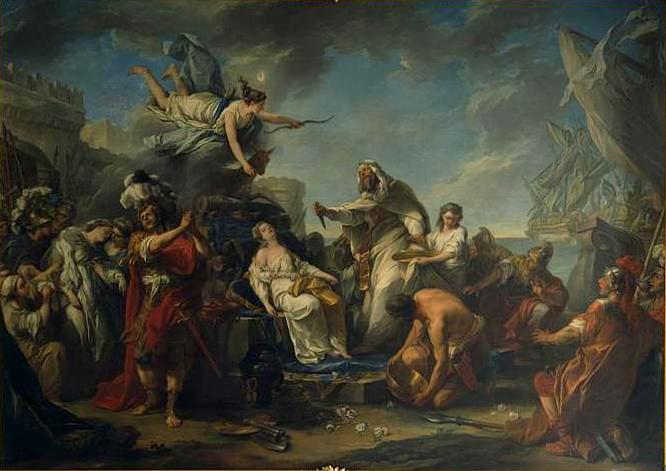 Calchas During the Trojan War

The importance of Calchas to the Achaean forces perhaps diminished subsequently though, for Calchas was not the only seer who was prominent during the Trojan War, for on the side of the Trojans were Cassandra and Helenus; and following disagreements, Helenus would leave Troy and arrive amongst the Achaean forces.

It was generally considered that it was Helenus who then revealed the final requirements for Achaean victory in the war, with the bone of Pelops, the removal of the Palladium, and the skills of the son of Achilles all required.

The original prediction of Calchas, for the Trojan War to last ten years did come true, for the subterfuge of the Wooden Horse saw Troy fall to the Achaean forces, and despite not being a fighter of note, Calchas is normally said to be amongst the heroes hidden inside the belly of the horse.

The Death of Calchas

Details of the contest vary between ancient sources, but a prominent version sees Calchas and Mopsus predict the number of figs upon a wild fig tree. The prediction of Mopsus proved to be exactly right, with the son of Apollo also telling of the number and size of containers needed to house the picked figs, something that Calchas had been unable to do. Knowing he had been bested, Calchas shut his eyes, and died.

Alternatively the predictions were made not about the number of figs, but on how many pigs were to be born, to a pregnant sow, and again Mopsus proved to be correct, whilst Calchas was wrong.

A third possible reason for the death of Calchas was a prediction dealing with the life and death of Amphimachus, a Lycian king. Mopsus told the king not to go to war, for defeat would results, whilst Calchas saw only victory for Amphimachus. The king went to war and was defeated, and thus Calchas killed himself.

One final tale of the death of Calchas does not involve Mopsus, but instead comes about because of the prediction of another, unnamed, seer. Calchas had planted a number of vines, but the other seer predicted that he would never drink wine produced for them. Grapes were picked form the vines and wine was made though, and so Calchas invited the other seer to the first tasting. Calchas lifted the wine glass to his lips, and started to laugh, now believing that the prediction was totally false, the laughter caused Calchas to choke, and so the seer died before he drank of his vines.

Colophon is not always the location for the death of Calchas, and alternates are given, either in the nearby sanctuary of Claros, or else in another city of Asia Minor, Grynium. It was though, generally agreed upon that Calchas was subsequently buried in Notium, a port city for both Colophon and Claros.
Contents