THE GODDESS GAIA IN GREEK MYTHOLOGY

Gaia was historically one of the most important of all Greek gods and goddesses, although her name is not one that is often thought today in that connection. In Ancient Greece though she was revered, for not only was Gaia the Greek goddess of the Earth, but she was also the Mother Goddess, the ancestor of most other deities.

Today, neo-paganists still revere Gaia as she is still considered to be Mother Earth.

The Family Line of Gaia

Mother Earth - Prairie Kittin - CC-BY-ND-2.0
Gaia would come into existence at the very start of the cosmos, for she, according to Hesiod, was one of the first gods, a Protogenoi, emerging from Chaos. There were four "first born" deities, Chaos, Gaia, Tartarus and Eros.

The earth at this time was shapeless, but Gaia would get to work bringing forth features and life. Gaia would also bring forth other Protogenoi, the ten Ourea, the Mountains, Pontus, the Sea, and Ouranos, the Sky.

Ouranos would become the first supreme deity, and would thereafter partner with Gaia, with the Earth giving birth to the three Cyclopes, the three Hecatonchires, and the 12 Titans.

With Pontus, Gaia would also give birth to several sea deities, including Ceto, Eurybia, Nereus, Phorcys and Thaumas.

Cronus would take up an adamantine sickle, and whilst his brothers held Ouranos still, Cronus would castrate his father, and as the blood of the Sky god fell onto Gaia, Gaia would give birth to the Gigantes, the Erinyes and the Meliae.

Eventually Zeus would lead a rebellion against the Titans, and overthrow them during the Titanomachy.

Gaia Angered for a Third Time 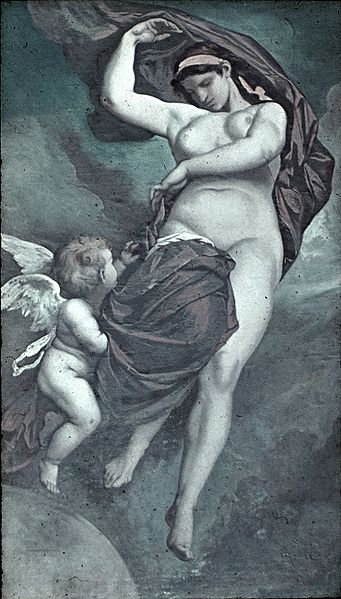 Gaia Mother Goddess - Anselm Feuerbach (1829–1880) - PD-art-100
Gaia was initially pleased when Zeus freed her children, the Cyclopes and Hecatonchires, from Tartarus, but then was displeased when Zeus locked up many of the Titans in their place.

Gaia would then incite her 100 Gigantes sons in rebellion, although this rebellion, the Gigantomachy, was less successful than the ones previously undertaken at her behest, for the gods of Mount Olympus, aided by Heracles, would defeat and kill the Gigantes.

Zeus though did not punish his grandmother, and indeed Gaia would bear Zeus a son, King Manes, with Poseidon she would mother Antaeus and Charybdis, and with Hephaestus she bore King Erichthonius.

Gaia was widely worshipped in Greece for she was the ancestor to most of the most important deities, and she was also the first goddess associated with the vitally important Oracles.