THE HERO TEUCER IN GREEK MYTHOLOGY

Teucer was a noted Greek hero who fought for the Achaean force at Troy, and unlike a number of other famous heroes of the Trojan War, Teucer would survive the fighting.

Teucer was a prince of the Grecian Salamis island, for Teucer was the son of King Telamon and Queen Hesione. Being a son of Telamon made Teucer half-brother to Telamonian Ajax (Ajax the Greater); Ajax being the son of Telamon’s first wife, Periboea.

Teucer was often referred to as illegitimate, or “bastard” Teucer, simply because he was not born to Telamon’s first wife.

This of course means that King Priam of Troy was Teucer’s uncle, whilst the children of Priam, including Hector and Paris, were Teucer’s cousins.

Ajax and Teucer would work in tandem during the Trojan War for Teucer would unleash his arrows from behind the mighty shield of Ajax. Arrow after arrow would find its mark amongst the Trojan ranks but every time that Teucer would fire at Hector, the mightiest of all the Trojan defenders, his arrow would be deflected. For unknown to Teucer, Apollo was at that time protecting Hector from death.

Hector would indeed at one point injure the shooting arm of Teucer, preventing more damage being done to the Trojan defences, at least in the short term.

Agamemnon was ecstatic about having the skill of Teucer upon his side, and promised Teucer great riches when the city of Troy fell. 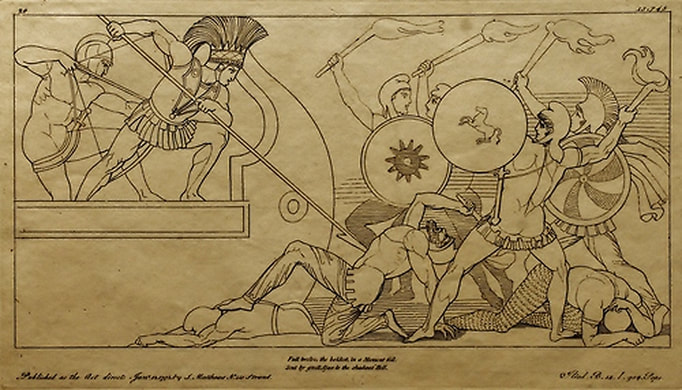 Teucer and Ajax the Great

The Downfall of Ajax the Great

By the end of the war Teucer was said to have slain 30 named Trojan heroes, with Homer naming but a few – “Whom first then of the Trojans did peerless Teucer slay? Orsilochus first and Ormenus and Ophelestes and Daetor and Chromius and godlike Lycophontes and Amopaon, Polyaemon's son, and Melanippus.”

Teucer was not amongst those who committed sacrilege during the Sacking of Troy, and as a result his return to Salamis was both uneventful and quick. This though did not mean it was a happy return, for Telamon refused to allow his son to step foot once again on his homeland.

Telamon would blame Teucer for the death of his brother Ajax, the failure to return the body and armour of Telamon’s son, and also for failing to bring the son of Ajax, Eurysaces, back to the islands. Eurysaces though did at some point reach Salamis, for he would succeed his grandfather as king.

Some say Teucer would travel onto Corinth, where after a meeting with Idomeneus and Diomedes, there was an agreement to attack to regain their kingdoms; although of course Salamis was not Teucer’s to take. In any case the plans came to nothing, for Nestor dissuaded the trio from acting.

Consequently, Teucer travelled onwards, possibly following a promise made by the Greek god Apollo that he was destined for a new kingdom. Teucer indeed came into a new kingdom when he aided King Belus of Tyre in his attempts to take the island of Cyprus. With Teucer’s help the island fell, and was subsequently presented to the Greek hero by Belus.

On Cyprus, Teucer married Eune, the daughter of Cyprus, and the couple had a daughter Asteria. Teucer would found the city of Salamis, named for his homeland, and would constructed a magnificent temple dedicated to Zeus.

Some vague myths do have Teucer trying to take the kingdom of Salamis from his nephew Eurysaces, and when repulsed travelled onwards to Galicia where he founded the city of Pontevedra
Contents