THE BIRTH OF HERACLES IN GREEK MYTHOLOGY

Heracles, or Hercules as he is also known, is the most famous of all the Greek heroes, with his legendary Labours, and many other adventures. In Greek mythology there is also a famous story about the birth of Heracles, and indeed, it is a story that also is a creation story for the Milky Way.

Heracles would be born into the family line of another famous Greek hero, Perseus, the slayer of Medusa.

Perseus would wed Andromeda, the Aethiopian princess he had rescued from the sea monster, and Perseus would subsequently found the city of Mycenae, where he was the first king. Perseus and Andromeda would become parents to seven sons, Perses, Electryon, Alcaeus, Sthenelus, Heleus and Mestor, and two daughters, Autochthe and Gorgophone.

In the story of Heracles’ birth it is Electryon, Alcaeus and Sthenelus who are important figures.

​Sthenelus would use this as an excuse to seize the throne of Mycenae, and he also exiled Alcmene and Amphitryon, who would subsequently find sanctuary in Thebes.

Still Amphitryon and Alcmene were not wed, for Alcmene would not marry until her brothers had been avenged, and so Amphitryon went to war.

The Proclamation of Zeus

As the time came for Alcmene to give birth to the son of Zeus, the god made a proclamation that the descendent of Perseus born the following day would become King of Mycenae. It was a rash promise, which some said was induced by Ate, the Greek goddess of Blind Folly.

Zeus of course meant this descendent to be his son, but by that time the descendants of Perseus were numerous, and Zeus also had not figured on the anger of his wife Hera. The birth of a son to Alcmene would be evidence of her husband’s unfaithfulness, and so Hera decided to interfere.

The Birth of Heracles Delayed

Hera agreed for it left her plenty of time to kill the illegitimate son of Zeus.

Heracles Abandoned and the Creation of the Milky Way

It was not Hera directly though who first threatened the life of Heracles, for Alcmene was so worried about the anger of Hera, that it was Heracles’ own mother who abandoned the new-born Heracles in a Theban field, presuming that he would die from exposure.

As with many other heroes though, Heracles did not die, for he was rescued, for his own half-sister, the goddess Athena, plucked him from that Theban field and took the baby with him to Mount Olympus.

Athena decided to have fun with her stepmother, Hera, and so Athena told Hera of her rescuing an “unidentified” baby; and the motherly instincts of Hera, kicked in, and so Hera took the baby to nurse him, unaware of just who she was nursing.

Heracles would suck so hard on the nipple of Hera that the goddess was forced to push the baby away, and the milk of the goddess would be released, spraying out into the heavens, creating the Milky Way.

The baby Heracles had consumed enough nourishment from the goddess to give him strength and power beyond that of any normal mortal; and Athena would then return her half-brother to the care of Alcmene and Amphitryon. 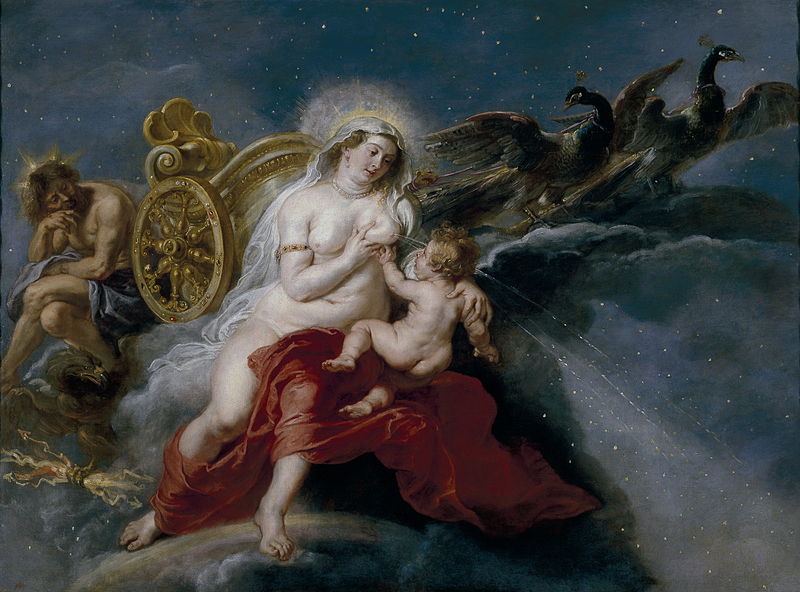