Antiope was a beautiful maiden in Greek mythology, and is famous for being a lover of Zeus, and the mother of two sons for the supreme god. ​

Antiope is often referred to as a princess of Thebes, although the city founded by Cadmus was probably still known as Cadmea at the time. Antiope is normally called daughter of Nycteus and Polyxo; Nycteus being son of Chthonius, one of the Spartoi, who had assisted Cadmus in the building of the city.

Alternatively, Antiope might have been a Naiad, a daughter of the Potamoi Asopos, god of the river that ran through Boeotia. ​

Antiope would grow up to become the most beautiful of Boeotian maidens of the day; it was also said that, when of age, Antiope, became and Maenad, one of the female followers of the god Dionysus.

There are many different versions of the myth of Antiope, often with events occurring in different orders, but there are three main parts to the story of Antiope; her seduction by Zeus, Antiope’s leaving Thebes, and her return to Thebes. ​

The Seduction of Antiope

The disguise proved to be successful, and Antiope found herself pregnant by the Olympian god. ​​ 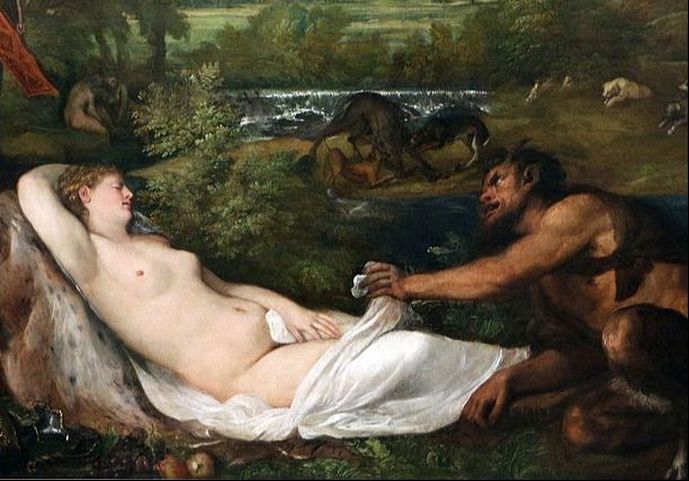 The Departure of Antiope

The army of Thebes and that of Sicyon were evenly matched, and in the ensuring battle both Nycteus and Epopeus were injured, although Nycteus’ injury proved more severe, for he would die shortly after his return to Thebes.

Before his death, Nycteus entrusted the punishment of Epopeus, and the retrieval of Antiope, to Lycus, Nycteus’ brother, and the soon to become regent of Thebes.

Lycus proved more successful than his brother for, after a short siege, Lycus took Sicyon, killing Epopeus, and retrieving his niece, Antiope.

On the return journey to Thebes, Antiope would give birth to two boys, sons of Antiope and Zeus who were to be named Amphion and Zethus.

Antiope was commanded by Lycus to abandon her new born sons, possibly because Lycus believed them to be the sons of Epopeus; and so on Mount Cithairon, near to Eleutherae, Amphion and Zethus, were exposed, and left to die.

As often occurred, these abandoned children did not die, for a shepherd rescued them, and raised them as his own. Zeus had not abandoned his sons by Antiope either, for Hermes, taught his stepbrothers, and Amphion became a highly skilled musician, whilst Zethus was highly skilled at keeping cattle.

The Persecution of Antiope

Having left her sons behind, and believing them now dead, Antiope returned to Thebes, but it was not a happy return, for she was put into the care of Dirce, the wife of Lycus, who kept Antiope as her personal slave, with Antiope chained to prevent her leaving.

​Some speculate that the reason for Dirce’ antipathy towards Antiope came about because, prior to her departure from Thebes, Antiope had actually been Lycus’ first wife; a situation which would not have been out of keeping with other mythological tales.

The Story of Antiope Draws to an End

Amphion and Zethus then went to Thebes, where the either killed Lycus, or forced him to abdicate his position, and so Amphion became the king of Thebes, usurping Laius, who should have been king.

All though was not well for Antiope though, for Dionysus now sought revenge for the killing of his follower, Dirce, and as he could not harm other sons of Zeus, Antiope was the target of his anger. Antiope was thus sent mad by Dionysus.

Antiope would wander the land until she came to the land of Phocis, the kingdom ruled by Phocus, son of Ornytion. King Phocus was able to cure Antiope of her madness, and the kind would then marry the former lover of Zeus. Antiope and Phocus would live out their lives together, and after death, the pair would be buried in a single tomb upon Mount Parnassus.
Contents