The character of Daedalus appears in one of the most famous stories of Greek mythology, for it was Daedalus who crafted wings for his son Icarus and himself to escape their imprisonment.

Daedalus was a master craftsman, an inventor and architect who had been blessed by the Greek goddess Athena.
might have been Metion or Eupalamas (a son of Metion), or by his mother who is named by some as Merope, a daughter of Erechtheus.

Athena was the patron of Athens, as well as an ancestor, of sorts, or Daedalus, and the goddess would bless her descendent with skills beyond the norm, and by adulthood, Daedalus was an architect and sculptor of high repute.

The Crimes of Daedalus

Daedalus would start to tutor others to become craftsmen, but this would lead to his fall from grace, for it was said that Daedalus would kill one of his pupils. The murdered pupil was named as either Daedalus’ nephew Talos, or else Perdix, potentially another nephew of Daedalus. Daedalus was said to have become enraged when he foresaw that his own pupil would outstrip his own skills. Indeed, it was said that Perdic invented the saw and compass.

Thus Perdix, or Talos, was thrown from a roof upon the Acropolis, although it if it was Perdix who was thrown, the pupil did not die, for Athena turned him into the partridge before he hit the ground.

Daedalus was convicted in the Areopagus, the rocky court where homicides were investigated, and as punishment Daedalus was banished from Athens.
As a child Asterion was given the freedom of King Minos’ palace at Knossos, but as he grew older so he became wilder and more savage, and it would become unsafe to have him inside the palace.

King Minos that had Daedalus create a place of confinement for the child of Pasiphae; and so Daedalus designed and built a labyrinth beneath Minos’ palace. The labyrinth was a maze which appeared to have neither beginning nor end, and such was the complexity that once finished even Daedalus had trouble in exiting it.

Inside the Labyrinth, the Minotaur would be fed through holes in the roof of the maze, with the common food being human sacrifices. These sacrifices were youths and maidens offered up in tribute by Athens; Athens having been defeated by the army of King Minos.

The sacrifices would go on for several years, before one last batch of youths arrived from Athens. Amongst their number was the Athenian prince Theseus, and spying him as he disembarked, Ariadne, the daughter of King Minos fell in love the Greek hero.

Theseus had made it his quest to end the tribute paid by Athens to Crete, and Ariadne decided to aide him in his quest. Ariadne therefore approached Daedalus for help, for in no other way could Theseus safely navigate the Labyrinth.  Daedalus gave Ariadne a ball of golden thread, and by tying one end of the thread to the entrance, Theseus was able to return to his entrance point having successfully killed the Minotaur.

Theseus and Ariadne would quickly leave Crete after the killing of the Minotaur, but King Minos realised that the pair must have had help from Daedalus, and so before leaving Crete in pursuit of his daughter, King Minos locked Daedalus and Daedalus’ son, Icarus, in a tower, with a guard placed at the doorway preventing escape. 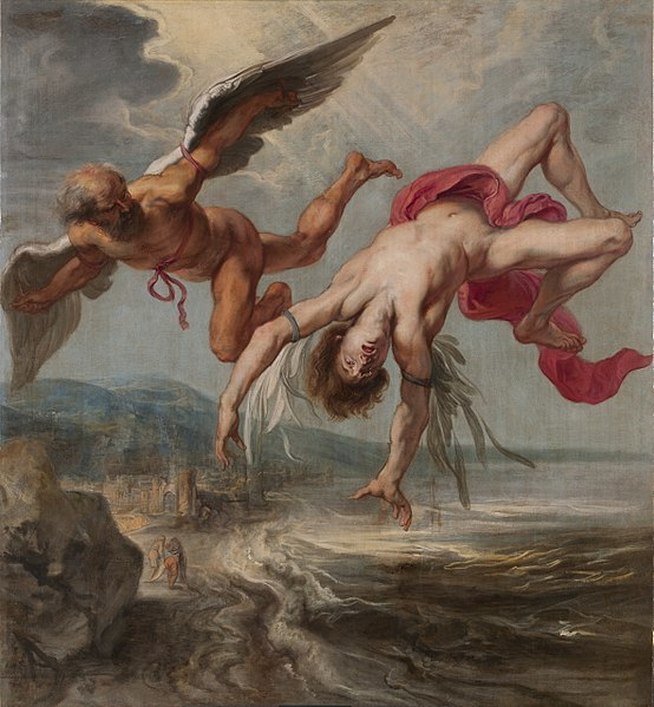 King Minos set sail once again from Crete, and stopping at every major city, Minos offered a reward, not for the return of Daedalus, but in the form of a prize to whoever could run a fine thread through a spiral seashell. King Minos believed that none bar Daedalus could complete such a task, and thus if the puzzle was solved then the presence of the craftsman would be revealed.

Eventually King Minos arrived upon the island of Sicily, and King Cocalus, wishing to relieve Minos of the reward, presented the puzzle to Daedalus.

Daedalus quickly solved the problem, and tied a thin thread to an ant, and then induced the idea to move through the seashell with well-placed honey.

When Cocalus produced the threaded seashell to Minos he unwittingly revealed the presence of Daedalus in his household; and immediately, Minos demanded the return of his servant.

With the powerful Cretan fleet anchored off of his kingdom, Cocalus seemed to have no choice but to agree to the demands of King Minos. The daughters of King Cocalus had a different idea though, for they had no wish to lose the man who made them such fine gifts. Thus, whilst King Midas took a bath, the daughters of Cocalus killed the Cretan king.

With King Midas dead there was no requirement for Daedalus to return to Crete, and it was generally said he lived out his life upon the island creating many wonderful sculptures and architectural features, as well as exporting other objects across the ancient world.
Contents