THE GOLDEN RAM IN GREEK MYTHOLOGY

The Golden Ram and the Golden Fleece

The story of Jason and the Argonauts is one of the most famous stories to come out of Greek mythology, and of course the heroes were tasked with the capture of the Golden Fleece of Colchis.

The Story of the Golden Ram Begins

In Greek mythology, a beautiful woman would not simply attract mortals, and in the case of Theophane, it was the god Poseidon who lusted after the princess. Poseidon decided that in order to have his way with her, he would abduct her, and so Poseidon and Theophane were soon on the island of Crumissa.

The Golden Ram is Born

The disappearance of Theophane caused a stir in Bisaltia and soon the suitors left behind were on the trail of the daughter of Bisaltes. To confuse the chasers Poseidon transformed himself into a ram, and Theophane into a ewe, whilst the inhabitants of Crumissa were changed into cattle and sheep.

When the suitors landed upon Crumissa they found no Theophane and no people at all. The suitors did not leave the island immediately though, and set up a camp for themselves, and then to sustain themselves, they commenced to eat the animals that they found on the island. Poseidon then decided to transform the suitors of Theophane into wolves.

Poseidon was then able to have his wicked way with Theophane at his leisure; the brief relationship between Poseidon and Theophane would produce one child, a golden ram, the Crius Chrysomallus.

The Golden Ram to the Rescue

Phrixus and Helle Fly Away on the Golden Ram

Where Helle fell would subsequently be known as the Hellespont, a name that the Dardanelles, is still sometimes referred to.

The Death of the Golden Ram

Phrixus would manage to hold on to the fleece of the Golden Ram though, and after a long flight, the son of Nephele would safely land in Colchis.

Phrixus was told to sacrifice his rescuer, the Golden Ram, to honour the god Poseidon. Thus, the life of the Golden Ram came to an end, but in undertaking the sacrifice, Phrixus came into possession of the Golden Fleece.  Poseidon would ensure that the Golden Ram would forever be remembered for the Crius Chrysomallus would be transformed into the constellation Aries.

The Golden Fleece in Colchis

King Aeetes would subsequently place the Golden Fleece in an honoured position, for it was placed upon an oak tree in the sacred grove of Ares.

Although greatly enamoured by the gift, the Golden Fleece would subsequently prove a curse for Aeetes. Prior to the arrival of Phrixus and the Golden Ram, Aeetes had a reputation for being a hospitable king, but now a prophecy was made that Aeetes would only remain King of Colchis if the Golden Fleece remained with Ares’ sacred grove.

Now fearful of his own position, Aeetes commanded that any strangers found within Colchis were to be put to death, for he feared that a stranger might steal the Golden Fleece.
Aeetes still plotted against Jason and the Argonauts though, and the king was even planning to kill the heroes whilst they slept. Medea though warned Jason, and before the king could implement his plan, Jason acted. Medea and Jason went to the grove of Ares, and the sorceress managed to put the Colchis dragon, the serpent who guarded the grove, to sleep. Thus, Jason was free to remove the Golden Fleece from its perch, and flee back to the Argo.

Jason, the Argonauts and Medea would therefore leave Colchis with the Golden Fleece safely on-board the Argo. 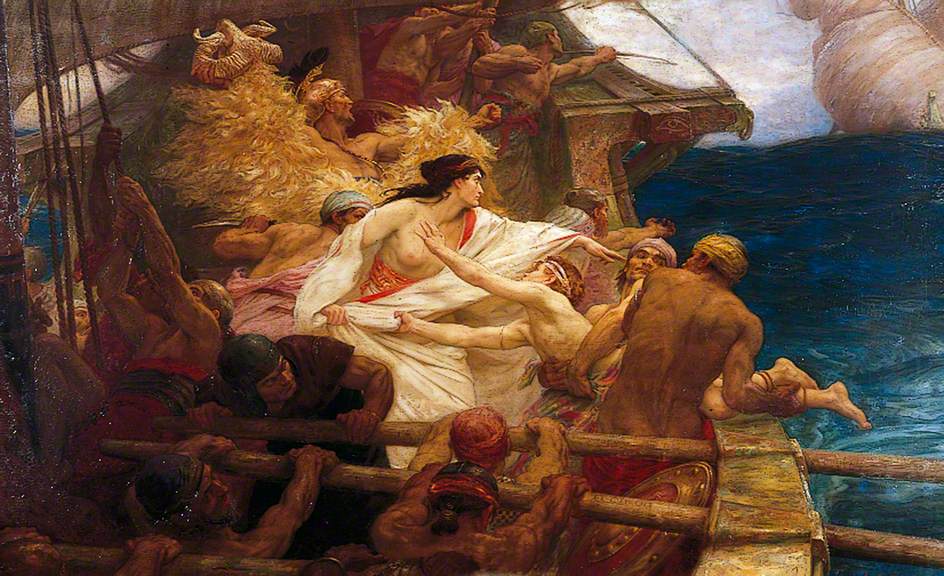 The Golden Fleece - Hebert James Draper (1864-1920) -PD-art-100
As to what happened to the Golden Fleece was never made clear in the ancient sources, although other similar artefacts, such as the tusks of the Calydonian Boar, normally ended up in a temple dedicated to one of the major Greek gods or goddesses.

The story of the Golden Fleece has evolved over the centuries though, and later stories connected with the artefact imbued it with healing powers, although in antiquity the Golden Fleece was simply a great treasure rather than a magical object.
Contents