THE KING TANTALUS IN GREEK MYTHOLOGY

The name of Tantalus is a relatively famous one from Greek mythology, and still recognisable today, for the name of the king gives rise to the English word tantalise.

Tantalus was the son of the god Zeus, born to the nymph of Mount Sipylus, Pluto. Tantalus was a favoured son of Zeus and was given the region of Sipylus to rule.

The kingdom of Tantalus would get a queen when the king wed Dione, one of the Hyades, and therefore a daughter of the Titan Atlas; occasionally, Dione is replaced in mythological tales by a Naiad, either Eurythemista or Euryanassa.

The Crimes of Tantalus

Then Tantalus would also attempt to steal some of the ambrosia and nectar served at the banquets, possibly in an attempt to make himself immortal. Tantalus was also accused of stealing a golden dog crafted by Hephaestus.

The worst crime committed by Tantalus though occurred when the king invited the gods to a banquet hosted by himself.

The Banquet of Tantalus

For some unknown reason Tantalus decided to play a trick on the gods, and the king killed his own son Pelops. The body of his son was then cut up, cooked, and then served as a meal to the gods.

Most of the invited gods realised what was occurring, but at the time Demeter, was distracted for her daughter Persephone was in the realm of Hades, and so Demeter took a mouthful of the offered food.

An angered Zeus order the Moirai, the Fates, to resurrect Pelops. The Moirai did this by re-cooking the meal in a magical cauldron, but it was soon discovered that a part of the shoulder of Pelops was missing, Demeter having eaten it. To replace the missing body part, Demeter would have Hephaestus craft a replacement from ivory.

Tantalus would be removed from his throne by Zeus, and Pelops placed upon it in his place, but then Zeus meted out eternal punishment to Tantalus.

The Punishment of Tantalus 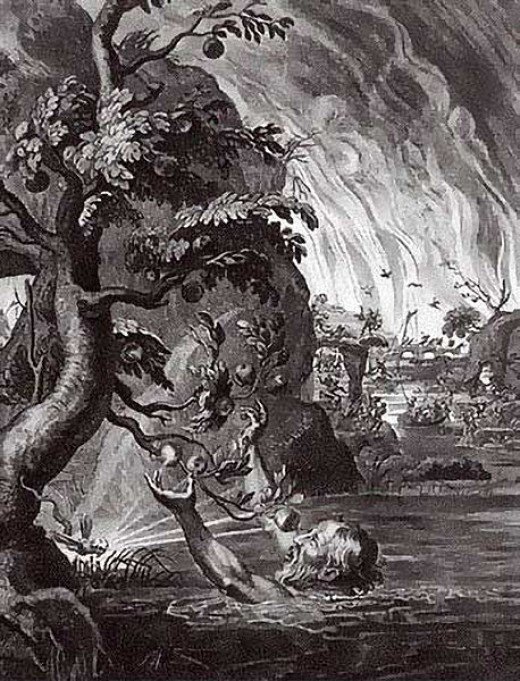 The Curse on Tantalus' Family

Orestes would eventually end the curse, after he prayed to Athena, but he still had to face the court of the Erinyes.