Thyestes was a king from Greek mythology, who today, has a reputation of being amongst the most conniving of all the mythological kings. Thyestes, and his brother Atreus, though were of the line of Tantalus and so cursed from birth, and their actions therefore were perhaps pre-ordained.

Thyestes was a son of King Pelops and Queen Hippodaemia, and therefore grandson of Tantalus.

Thus, Thyestes had many siblings, including Atreus, Pittheus, Astydaemia, Nicippe and Eurydice, and also a half-brother, Chrysippus.

Nevertheless Thyestes and Atreus were certainly blamed for Chrysippus’ death, and banished. The pair would find a home in the Mycenaean kingdom of their nephew, Eurystheus, and were provided with land and position there.

Atreus would wed Aerope, the daughter of King Catreus, and she would bear him several children, including Menelaus and Agamemnon. Aerope though would also take herself a lover, Thyestes.

It was occasionally said that Thyestes would father two sons by Aerope, Tantalus and Pleisthenes, but more commonly it was stated that Thyestes was father to two or three unnamed sons, and one daughter Pelopia, by an unnamed woman.

Whilst in Mycenae Atreus started to display foolish tendencies, and when he planned to kill the finest lamb in his flock as a sacrifice to Artemis, he reneged on his promise, for he felt that the golden fleeced sheep he found was too good to sacrifice, and so Atreus gave it to Aerope to hide away. Aerope would promptly give the lamb to her lover Thyestes.

Thyestes Gains, and Loses, the Throne 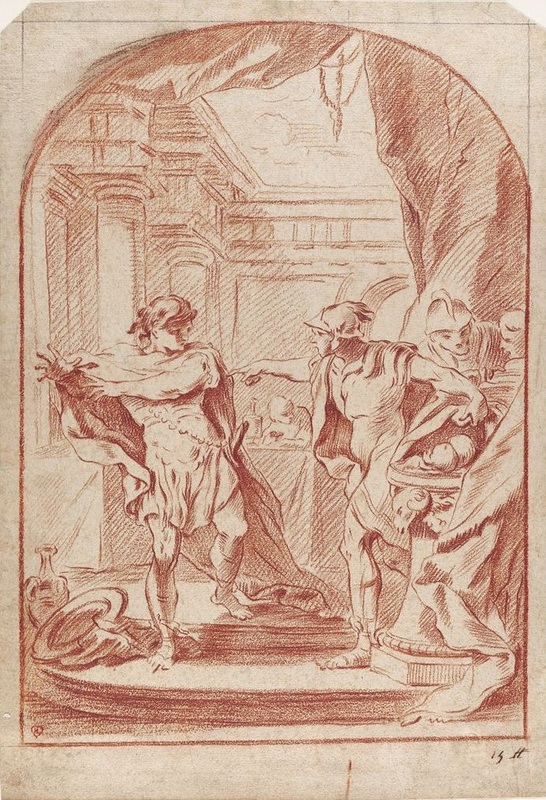 The Plotting of Thyestes

Thyestes and Pelopia went once again into exile, although father and daughter went their separate ways. Pelopia would find sanctuary in Sicyon, where she obtained a position in the temple of Athena, whilst Thyestes travelled to Delphi to consult the Oracle about he could gain vengeance upon his brother.

The Oracle told Thyestes that if he fathered a son by Pelopia then that son would kill his brother.

Thyestes would travel on from Delphi to Sicyon, either knowing that his daughter was there, or else just coincidentally arriving in the same place.

When Thyestes arrived in Sicyon, Pelopia was leading a ritual dance associated with a sacrifice to Athena. Covered in blood from the sacrifice, Pelopia would make her way to the river to wash herself. There, Thyestes, with face hidden, jumped upon his daughter and raped her; although the ancient sources do not always make it clear as to whether Thyestes knew who the woman he was raping was.

As Pelopia was being raped, she had the presence of mind to steal her attacker’s sword, so that she might one day recognise the rapist.

Thyestes Back in Mycenae

Eventually, years later, Agamemnon and Menelaus came across Thyestes in Delphi, and returned with their uncle to Mycenae, just as Atreus had ordered. Atreus promptly threw his brother into the palace dungeons, believing that with his brother returned the curse on his kingdom would be lifted.

Atreus though didn’t want his brother left alive and so commanded Aegisthus to kill the prisoner. When Aegisthus unsheathed his sword, Thyestes immediately recognised it, and told his would be executioner that it was his sword. Aegisthus called upon his mother to explain previous events, but when she saw her father in chains, she realised just who had raped her. Pelopia grabbed the sword from Aegisthus and killed herself.

Aegisthus returned to Atreus, who seeing the bloodied sword, believed that his brother had been killed, but Aegisthus instead turned the blade upon the King of Mycenae, killing his uncle. Aegisthus then placed Thyestes onto the throne that he had previously occupied.

Restored to the throne of Mycenae once again, Thyestes would exile his two nephews. Eventually, Agamemnon and Menelaus would find sanctuary in the court of King Tyndareus in Sparta.

The End of Thyestes

Thyestes would lose the throne of Mycenae once again when the exiled Agamemnon and Menelaus returned at the head of Tyndareus’ large Spartan army.

Agamemnon would exile his uncle, and Thyestes would make a new home for himself on the Ionian island of Cythera, and would end his days there; Agamemnon’s failure to deal with Aegisthus, the son of Thyestes, though, would have deadly consequences for the new king of Mycenae.
Contents