Pegasus is probably the most famous creation to appear in the tales of Greek mythology with the imagery of the winged horse still used in modern advertisements and emblems.

The Birth of Pegasus

Medusa would be cursed with the ugliness associated with the monstrous Gorgon, with hair of snakes and a stony gaze, and Athena also cursed Medusa so that she could not give birth to the offspring conceived in Athena’s temple.

Medusa would make her new home with the other Gorgons, but eventually she was tracked down by Perseus who had been quested with bringing back the head of Medusa.

Perseus would manage to approach Medusa, using his shield to protect him from the Gorgon’s gaze, and with his sword, Perseus cut off the head of Medusa. Medusa would fall down dead, but from the severed neck sprang forth the children of Medusa, Pegasus and Chrysaor.

Pegasus emerged as a fully grown winged horse, whilst Chrysaor, Pegasus brother, either emerged as a giant or a winged boar.

Pegasus and the Gods

Zeus would indeed be the god to make the most use out of Pegasus, and Pegasus would become a weapon carrier of Zeus, sharing the role with gigantic eagles, and it was therefore Pegasus who often carried the thunderbolts crafted by the Cyclopes when Zeus went to war. 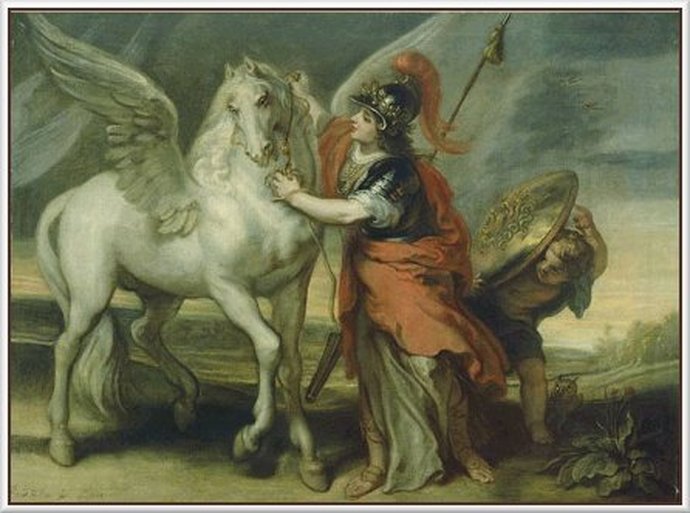 Some stories tell of Pegasus finding himself a mate in the form of Ocyrhoe (also known as Euippe). Ocyrhoe was the daughter of the centaur Chiron who had been transformed into a horse by Zeus, when she had revealed too much about the future, especially about the fate of her own father.

Pegasus and Ocyrhoe were said to have mated bringing forth Celeris, and possibly Melanippe, although Melanippe was another name given to Ocyrhoe. Some tell of these offspring of Pegasus being the forefathers of a new race of winged horses, also Celers was not necessarily a winged horse, and often is just described as being swift of hoof.

Pegasus and the Muses

Athena gave Bellerophon a golden bridle and told Bellerophon he would need to make a sacrifice to the god Poseidon, this Bellerophon did, and subsequently the hero found Pegasus drinking from the Pirene well upon the Acrocorinth. Pegasus saw the golden bridle, and recognised it as one used by Athena, and so Pegasus allowed Bellerophon to put it on, and then allowed the hero to climb upon its back.

The riding of Pegasus did make it easy for Bellerophon to best the Chimera, but his victory then gave the hero an overinflated sense of worth. Thus, Bellerophon decided that he should make a trip to the palaces of the gods upon Mount Olympus. Such an action was seen as overly presumptuous by Zeus, and Zeus decided to stop Bellerophon.

A gad-fly was dispatched, which subsequently stung Pegasus, and when the winged horse bucked in pain, Bellerophon was unseated. The hero fell to earth and was left a cripple, whilst Pegasus flew unencumbered back to his stable upon Mount Olympus.
Contents