​The Story of Perseus and Andromeda

Surviving tales of Greek mythology often extol the beauty of the figures, both male and female, and mortal and immortal, that appear within them.

The goddesses Hera, Athena, and Aphrodite would compete for the title of most beautiful through the Judgement of Paris; whilst mortals such as Helen, Cassandra and Psyche were also noted for their looks. Another beautiful mortal female was a princess of Aethiopia named Andromeda.

Alternatively, Perseus simply thrust his sword into the shoulder of the sea monster, killing it.
​
The rescue of Andromeda has been a popular story for painters for generations, in many painters Perseus is seen upon the back of the winged horse Pegasus, although in the original stories of Ancient Greece, Perseus flew because of the winged sandals of Hermes, rather than the winged horse. 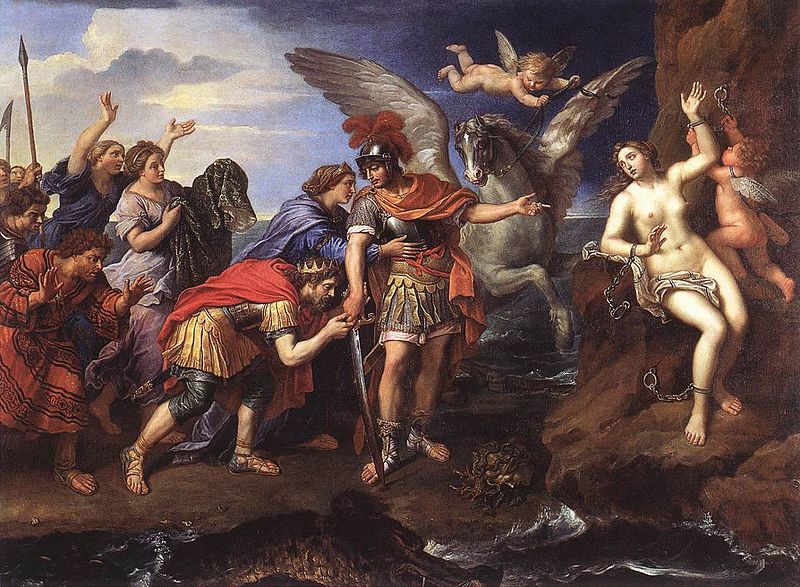 ​It was but a moment’s work for Perseus to vanquish Phineus though, for the Greek hero simply removed the head of Medusa from its satchel, and Phineus was turned to stone.
​
Andromeda and Perseus would then depart together from Aethiopia.

Andromeda would follow her husband first to Seriphos, where Perseus rescued Danae, and then onto Argos. Andromeda would nominally become the queen of Argos when Acrisius died, but as Perseus turned down the throne, this accolade went to the wife of Megapenthes.

Megapenthes would swap the throne of Tiryns with Perseus, so Andromeda would follow her husband there, and then onto Mycenae, when Perseus founded that city.

The Persians were said to be named after Perses, whilst through the line of Alcaeus, the hero Heracles came forth.
​
After her death, Andromeda would be placed amongst the stars by the goddess Athena, and the Andromeda constellation would be joined by that of Perseus, Cassiopeia, Cepheus and Cetus.
Contents
Colin Quartermain - Andromeda - 20th July 2016