THE GODDESS ERIS IN GREEK MYTHOLOGY

Eris was the Greek goddess of Strife, Discord and Rivalry, a goddess who caused the smallest argument to erupt into more serious events, including war. Eris was arguably the opposite of the Greek goddesses Harmonia and Dike.

The goddess Eris was said by Hesiod to be the daughter of Nyx (Night), and therefore a dark goddess alongside siblings like Geras (Old Age), Moros (Doom) and Thanatos (Death).

As with many children of Nyx, some writers in antiquity would name Erebus (Darkness) as the father of Eris, although more often no father was named.

Eris is sometimes called the sister of Ares, which would make her parents Zeus and Hera, but this is probably because the names of Eris and Enyo, a Greek war goddess, were used interchangeably by some writers in antiquity.
Away from the battlefield it was also Eris who was said to cause men to deadly retribution taking a life where a life had previously been taken. Eris though, could also ensure that the smallest disagreement between parties could erupt into bloodshed.

The Children of Eris

Hesiod would name Eris as the mother of many of the spirits (Cacodaemons) who plagued mankind; these children, by no named father, were Ponos (Hardship), Lethe (Forgethfulness), Limos (Starvation), Dysnomia (Anarchy), Ate (Ruin), Horkos (Oath), the Algae (Pains), the Hysminai (Battles), the Makhai (Wars), the Phonoi (Murders), the Androktasiai (Manslaughters), the Neikea (Quarrels), the Pseudologoi (Lies), the Amphilogiai (Disputes)

Eris and the Wedding of Peleus and Thetis

The throwing of the apple caused Discord amongst the assembled guests, for three goddesses claimed the apple for their own, each believing that they were the fairest; these three goddesses were Hera, Athena and Aphrodite. These conflicting claims would lead to the Judgement of Paris, and thereafter the Trojan War.

Thus Eris had lived up to her reputation as from one small thing, the throwing of an apple, a war erupted. 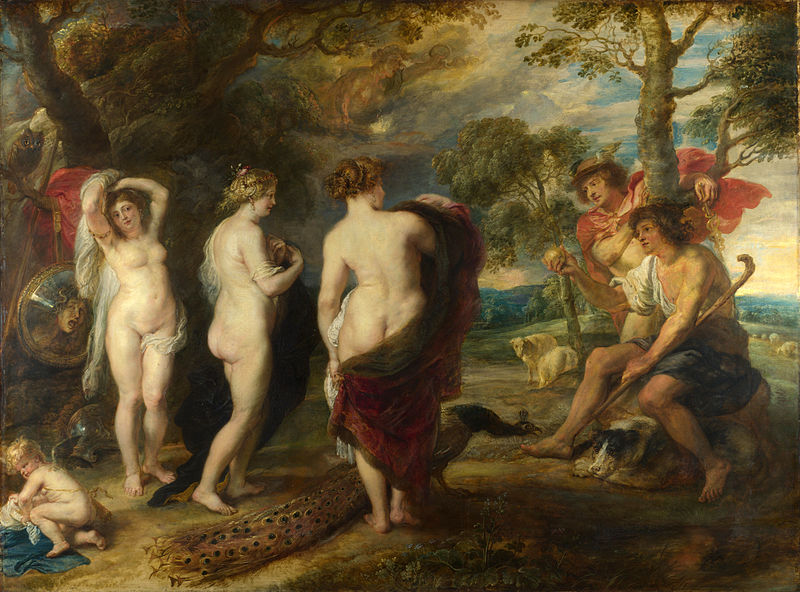