Those people who were believed to be able to see into the future were revered figures in Ancient Greece, and as a result many important mythological figures also had prophetic abilities.

Some of these figures were born with the gift of foresight, whilst many others had the gift bestowed upon them, and the god Apollo was particularly noted for dispensing the prophetic powers upon mortals. Indeed, it was Apollo who gave arguably the most famous female seer, Cassandra, the ability to see into the future; although in the case of Cassandra the ability was a curse rather than a gift.

​Subsequently, Cassandra would then teach her twin brother Helenus how to see in the future, and so good was Cassandra as a tutor that Helenus’ predictions would also always come true, although of course, Helenus’ would be believed.

An alternative version of the Cassandra myth has brother and sister receiving their prophetic abilities at the same time; for when still babes, Cassandra and Helenus were left overnight in the temple of Apollo. During the night, two serpents emerged from the dark recesses, and made their way to the two children of King Priam. The serpents then licked clean the ears of Cassandra and Helenus, allowing both to hear clearly the sounds of nature, allowing accurate divination of the future.

Later on, Cassandra would spurn the advances of Apollo, and in the same way as the first version of the Cassandra myth, Apollo would curse the Trojan princess so that her predictions were ignored. 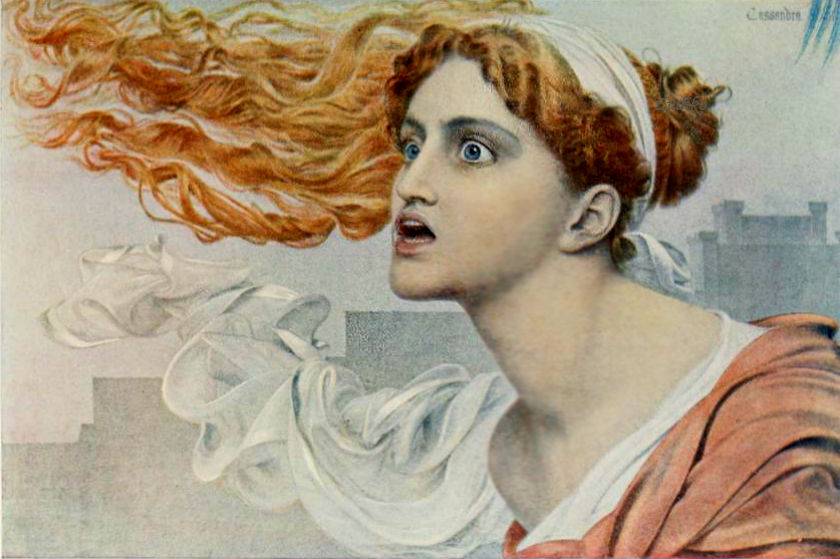 The Suitors of Cassandra

Later, other suitors of Cassandra were said to include Othryoneus of Cabeus and Coroebus of Phrygia.

The Predictions of Cassandra

The Rape of Cassandra

The Death of Cassandra

Despite being a slave of Agamemnon, Cassandra still attempted to warn the king of his, and her own fate if they were to return to Mycenae; for Cassandra knew that they would be murdered, for Agamemnon’s wife, Clytemnestra was having an affair with Aegisthus.

​As with all of Cassandra’s predictions this was ignored, and so Agamemnon did indeed die after surviving the Trojan War. Aegisthus would also kill Cassandra, and the two sons she had born to Agamemnon.

A less common tale told in History of the Fall of Troy (Dares of Phrygia) sees Cassandra not in the company of Agamemnon when he returned home, for the King Of Mycenae had given Cassandra, her brother Helenus, her mother Hecabe, and her sister-in-law Andromache, their freedom after the war. These four former Trojans would make a new home for themselves in Thracian Chersonese (Gallipoli peninsula).
Contents