Palamedes was an Achaean hero during the Trojan War, famed for his cleverness, he was responsible for Odysseus joining the Achaean forces at Troy, an act would result in Odysseus undying hatred of Palamedes.

Palamedes is commonly said to be the son of Nauplius, son of Poseidon; although some question how Nauplius could have lived over 200 years, until the time of Trojan War, and suggest that Palamedes was instead a son of Nauplius, who was a descendant of the first Nauplius.

The mother of Nauplius was named as Clymene, daughter of Catreus, king of Crete; Catreus having given Clymene to Nauplius to avoid a prophecy about his own death. Palamedes was said to have had brothers named Oeax and Nausimedon.

As Atreus, father of Agamemnon and Menelaus, married Aerope, another daughter of Catreus, there was a family bond between Palamades and the two Greek kings.

The figure of Palamedes is one that appears in many ancient texts, but most noticeably goes unmentioned by Homer, in the Iliad. Some have taken this to mean that Palamedes was a character invented after Homer’s time, though others propose that Homer did not mention Palamedes for his narrative sought to paint Odysseus in a positive light, whilst the tale of Palamedes could only shine badly on the Ithacan king. ​

Palamedes and the Achaean Fleet

Palamedes comes to the fore in the build-up, and during, the Trojan War, for when the Achaeans started to gather their forces together Palamedes was present.

Now Palamedes was not named as a Suitor of Helen so was not obligated by the Oath of Tyndareus to aid Menelaus in retrieving Helen from Troy, but even so he was present. Palamedes is of course not mentioned in Homer’s Catalogue of Ships, but the presumption is that Palamedes, and his brother Oeyx, were leading troops from Nauplius’ realm (though Euboean forces were led by Elephenor, according to Homer).

As forces gathered it was noticed by Agamemnon that Odysseus, King of Ithaca had not yet arrived, and so Palamedes was dispatched to find him. ​

During the Trojan War many of the Achaean heroes rose to the fore because of the those they killed in the opposing army, Palamedes though gift came in planning, for he was the foremost military strategist in the Achaean force. Some tell of how this skill annoyed both Odysseus and Diomedes, and also Agamemnon to a degree; as did the fact that Palamedes was the spokesman for those who believed it was time to bring the Trojan War to an end, and return home in defeat.

The cleverness of Palamedes was certainly the reason for the treacherous death of Palamedes at Troy, although it is commonly linked back to his revealing of Odysseus fakery. ​

The Death of Palamedes

Now some say of how Diomedes and Odysseus either drowned Palamedes, or stoned him to death, but the most common story of Palamedes death involves the cunning and deviousness of Odysseus.

Odysseus arranged for a Trojan prisoner to write a letter from King Priam of Troy to Palamedes, promising much gold if the war could be ended quickly. Then, Odysseus had this prisoner killed outside the Trojan camp, and of course the body, and the letter, were discovered the next day.

Now the letter by itself might mean little, but Odysseus also arranged for the very amount of gold promised to be buried beneath the tent of Palamedes; with the gold subsequently being found when Palamedes was accused of treason.

There was but one punishment for treason, and Palamedes was stoned to death by his Achaean comrades. 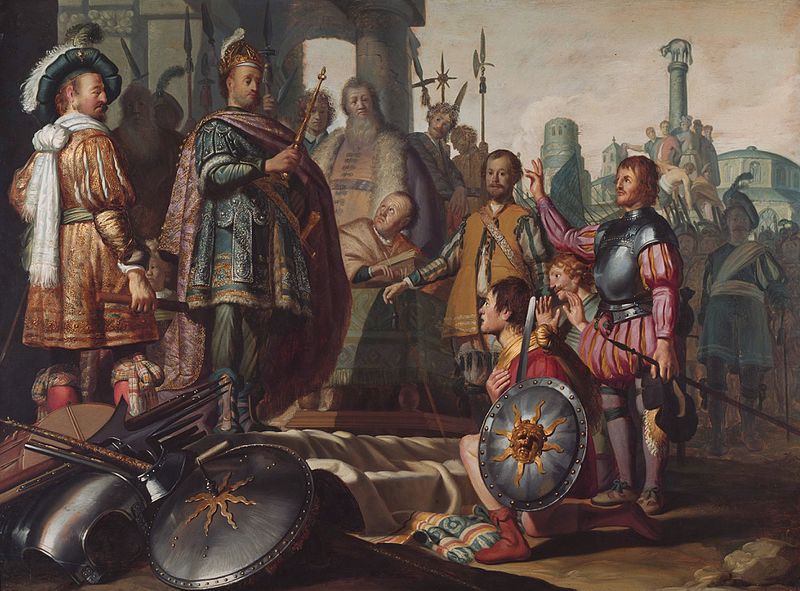 Palamedes in the Underworld

Some tell of Palamedes being observed in the Underworld after his death, playing dice with his old comrades, Ajax the Great and Thersites, all three of whom had suffered some form of injustice at the hands of Odysseus. ​