THE HECATONCHIRES IN GREEK MYTHOLOGY

The ancient world, according to Greek mythology, was not just a land of mortals, but was inhabited with an assortment of deities, mythical creatures and monsters. One such group of monsters was collectively known as the Hecatonchires, a group of three gigantic brothers.

The Hecatonchires are referenced in many of the most famous ancient sources, including the Bibliotheca (Pseudo-Apollodorus) and Metamorphoses (Ovid), although as with many of the well-known figures from Greek mythology the primary source tends to be the Theogony (Hesiod),  the genealogy of the gods.

The Hecatonchires, sons of Gaia

The name Hecatonchires is normally translated as “hundred handed”, and this is one of the normal features attributed to the Hecatonchires; other characteristics were their gigantic stature, and they were occasionally said to each have had 50 heads. The Hecatonchires were probably the personifications of gigantic storms, tsunamis and earthquakes.

Soon after they were born though, Ouranos saw the power and strength of his own children, and fearing that they might be a threat to his position as supreme deity, Ouranos decided to imprison them.

Prison for the Hecatonchires would prove to be Tartarus, the hell pit of the earth, the most famous prison of Greek mythology. For the same reason the brothers of the Hecatonchires, the Cyclopes, would also be imprisoned within Tartarus.

Ouranos did have a reason to be fearful as his partner Gaia was plotting against him, for the imprisonment of her sons was causing her both physical and mental pain; Tartarus being located deep in the bowels of the earth. Gaia found willing allies in her plot in the form of her other children by Ouranos, the Titans.

Cronus would wield an adamantine sickle to castrate Ouranos, as the other male Titans held their father down. A castrated Ouranos would lose much of his power, and so Cronus took up the position of supreme deity.

Cronus proved to be no more secure in the position than his father had been, for he was as afraid of the Hecatonchires, and the Cyclopes, as Ouranos had been. Thus the Hecatonchires were not released by Cronus, but instead the Titan added a prison guard to their prison in the form of the dragon Campe.

The Hecatonchires Released and the Titanomachy

The Hecatonchires were also given a new role in the cosmos, and were made the guards of Tartarus, and so former prisoners would become guards for the Titans imprisoned within Tartarus.

The Hecatonchires are rarely mentioned after the events of the Titanomachy, although Briareus appears a couple of times as individual in later Greek myths.

The first time Briareus would come to the rescue of Zeus, when Poseidon, Athena and Hera were plotting against him. The Naiad Thetis became aware of the plot against Zeus, and so enlisted the help of Briareus, who left his palace and stood at the side of Zeus; the mere presence of the Hecatonchire by the side of Zeus was enough to dissuade the plotters from following through with their plans.

Briareus also acted as impartial judge when a dispute arose between Helios and Poseidon; both gods were vying for the city of Corinth, to determine which of them would be worshipped by the populace. Briareus simply divided the worship from Corinth, so that Poseidon would receive the Isthmus of Corinth, whilst the high ground of the city around the Acrocorinth became sacred to Helios. 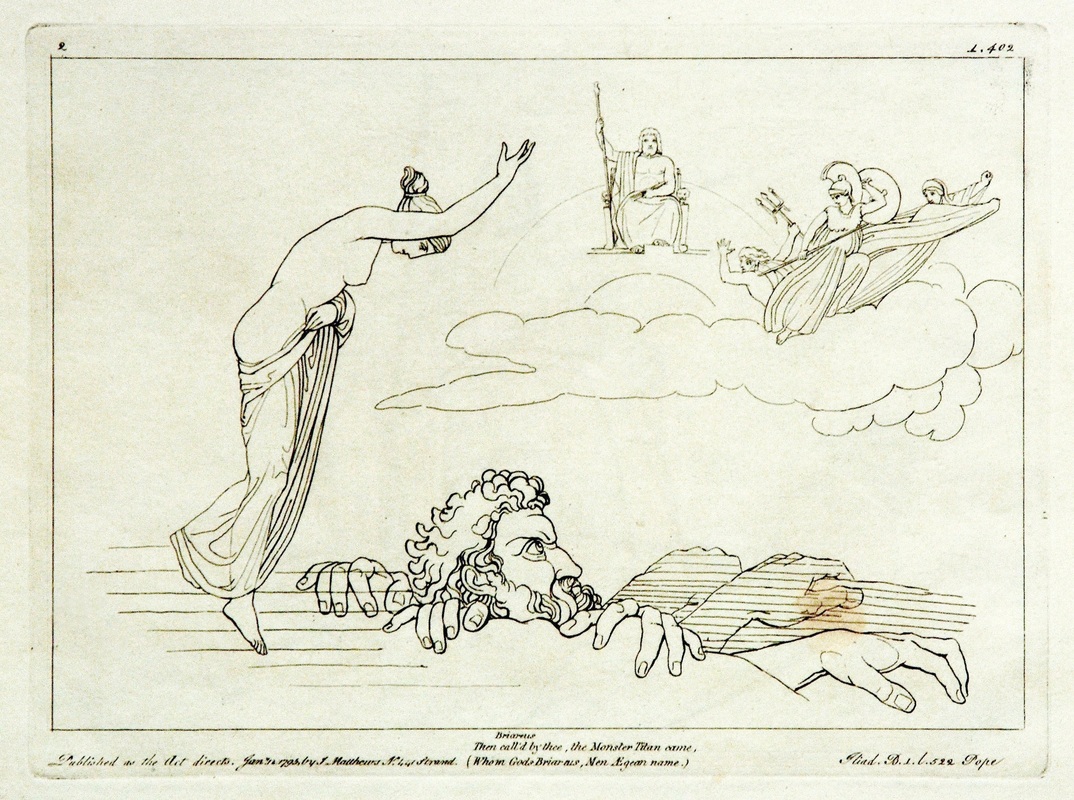