In Greek mythology Helios was the Titan god of the Sun, and as such, Helios was one in a line of Greek gods and goddesses that dealt with light and the sun, starting with the Protogenoi Aether and Hemera, the Titan Hyperion and the Olympian Apollo.

​Helios was the son of the Titan god of Light, Hyperion, and his wife, Theia, the goddess of sight, and thus, Helios was brother to Eos (Dawn) and Selene (Moon).

Born in the Golden Age of Greek Mythology, Helios would become the sun god, with responsibility for bringing light to the world.

Helios After the Titanomachy

Helios would also be encountered by Heracles as the Greek hero sought to steal the Cattle of Geryon. Crossing the desert, the heat of Helios greatly annoyed Heracles, and so Heracles started to shoot arrows at the god. Helios agreed to help Heracles if he would but stop shooting arrows at him, and so the sun god loaded to Heracles the Golden Cup so that he could cross the final stretch of water to get to the Cattle of Geryon.

Helios would also, on occasion, give willing assistance, for Helios rescued Hephaestus from the battlefield during the Gigantomachy, and also restored the eyesight of Orion, when the hunter had been blinded by Oenipion.

Helios though was also a competitive god, as indeed where most deities of the Greek pantheon, with two tales are told of his competition with other gods.

Firstly, there was a time when Helios and Poseidon competed for the sacrifices of Corinth, and so fierce was this competition that violence was expected. To mediate, Briareus, a Hecatonchire, was brought in to reach a decision; thus, Briareus declared that the Isthmus of Cornith would be sacred to Poseidon, and the Acrocorinth, the acropolis of Corinth would be Helios’.

Lovers and Children of Helios

Helios’ daughters Circe and Pasiphae were also famous sorceresses, with Circe a onetime lover of Odysseus, and Pasiphae the wife of King Minos of Crete. 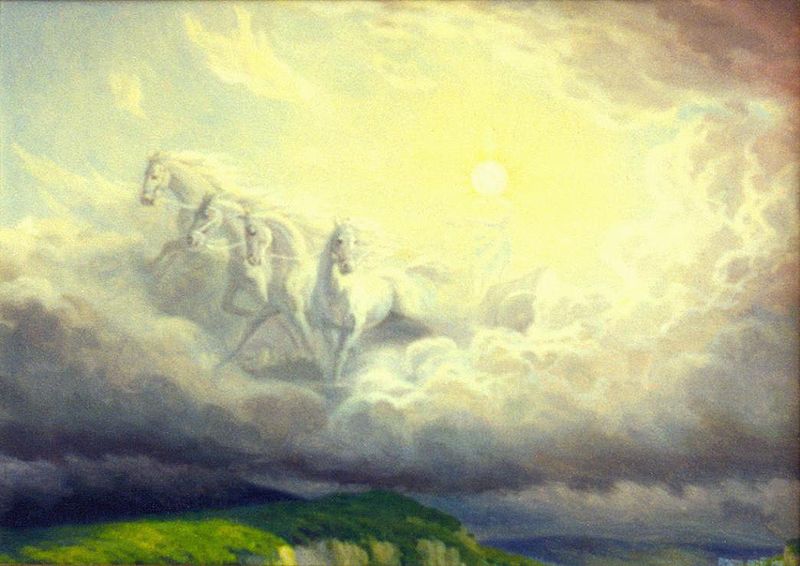