Tethys was at one time an important goddess in the pantheon of Greek deities, for Tethys was highly regarded as the Greek goddess of the Sea. Today, Tethys’s fame has been overshadowed by later deities in the Greek pantheon, namely the Olympians, for Tethys was of the preceding generation and was thus one of the Titans.

Tethys was the daughter of Ouranos (Sky) and Gaia (Earth), two primordial Greek deities; the parentage of Ouranos and Gaia ensured that Tethys had eleven close siblings, six brothers and 5 sisters. The six brothers were Cronus, Coeus, Crius, Hyperion, Iapetus and Oceanus, whilst the sisters of Tethys were, Rhea, Mnemosyne, Phoebe, Theia and Themis. Collective Tethys and her siblings were called the Titans.

Tethys and the Rise of the Titans

At the time of Tethys’ birth, Ouranos was the supreme deity of the cosmos, but due to the intrigue and plotting of Gaia, Ouranos was overthrown by the Titans. Cronus would wield an adamantine sickle to castrate his father, whilst his brothers held their father down; Tethys and her sisters did not play an active role in the overthrow of Ouranos.

All of the Titans though, would benefit from the overthrow of Ouranos, for whilst Cronus took up the mantle of supreme deity, the cosmos was effectively divided between the 12 Titans, with each god or goddess given a sphere of influence.

The Role of the Goddess Tethys

The rule of Tethys and the other Titans would become known as the “Golden Age” of Greek mythology.

Tethys as a Mother

Tethys is today best remembered as the mother of the 3000 Potamoi and 3000 Oceanids; the Potamoi being the river gods, and the Oceanids the nymphs of freshwater.  Thus, Tethys would supply the 6000 water sources with water drawn from Oceanus. 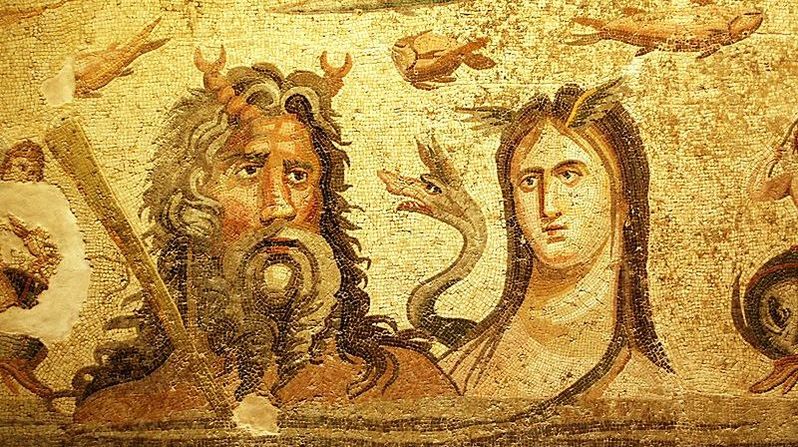 Oceanus and Tethys Mosaic in the Zeugma Mosaic Museum - CC-Zero

Tethys and the Titanomachy

​The “Golden Age” of the Titans would come to an end when Zeus, the son of Tethys’ brother Cronus, rose up against the rule of his father. This uprising would lead to a ten year war between Zeus, and his allies, against the Titans.

Not all the Titans though stood against Zeus, for all the female Titans, including Tethys, remained neutral, as did some of the male Titans, including Oceanus, the husband of Tethys. Some stories even tell of Zeus placing his sisters, Hestia, Demeter and Hera into the care of Tethys for the duration of the war.

The Rise of the Olympians

The goddess Tethys also plays an important role in the story of Aesacus, as it is told in Ovid’s Metamorphoses.

Aesacus was a son of King Priam of Troy who had the ability to see into the future, and thus when Hecuba fell pregnant with a boy who would become Paris, Aesacus warned his father of the destruction that that new son would bring upon Troy.

Aesacus would fall in love with the nymph daughter of the Potamoi Cebren; the daughter being named Hesperia or Asterope. The Naiad nymph would step on a poisonous serpent and was killed by the venom.

Aesacus decided that he could not go on living without Hesperia (Asterope) and so decided to commit suicide, and thus the son of King Priam threw himself from the tallest of cliffs into the sea. Before the fall killed him though, Tethys transformed Aesacus into a diving bird, and so Aesacus did not die, but plunged magnificently into the water

Far from being pleased at still being alive, Aesacus, now as a bird, tried once again to throw himself from the cliff, but again the dive of Aesacus broke the surface of the sea cleanly; and yet even today Aesacus, as the diving bird, still plunges from the cliff into the sea.
Contents