There are many famous female figures in Greek mythology, and amongst the mortals the likes of Helen and Andromache are particularly well-known, and whilst the name of Hesione is perhaps not as recognisable, the character that was Hesione played a role in many stories.

Hesione was a princess of Troy, for she was the daughter of King Laomedon, and therefore a granddaughter of Ilus, the founder of Troy. The mother of Hesione is variously given as Strymo, Leicuppe or Placia.

At this point the Greek hero Heracles arrived at Troy. Some tell of Heracles being in the midst of his Labours at this time, whilst others say he arrived with the Argonauts, whilst others still say he had just left Omphale.

In any case, Heracles entered Troy, and told Laomedon that he would save Hesione, and kill the sea monster if Laomedon would give him the Golden Vine and divine horses, the payments given to Tros, father of Ganymede, when Zeus abducted his son. Laomedon quickly agreed.

So, Heracles killed the sea-monster, potentially killing it from the inside of its stomach, rescued Hesione, and returned her to Laomedon.

Once again though, Laomedon refused to pay for services rendered.

Heracles had not the time to deal with deal-breaking king at that time, but the Greek hero vowed to return. 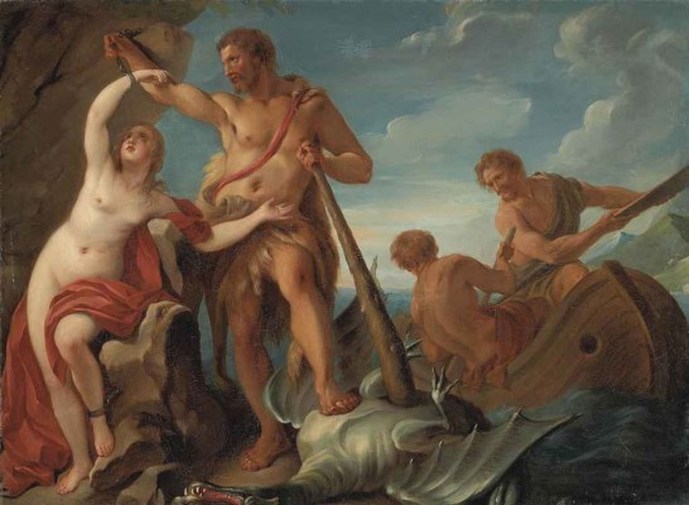 Later, Heracles did indeed return, leading six ships of men, and accompanied by Telamon, a companion of Heracles on a number of adventures.

Now no mortal could contemplate breaking the walls built by a god, but not all of the walls of Troy had been constructed by Poseidon, for Aeacus had constructed some, and Aeacus just happened to be the father of Telamon.

It was said by some that it was Telamon who first broke through the walls of Troy, an act that angered Heracles who wished to be the first, but Telamon quickly soothed the anger of Heracles, by building a magnificent sacrifice that was to be offered up in the name of Heracles.

Heracles’ anger against Telamon dissipated, but the anger aimed towards Laomedon did not, for Heracles put the king of Troy to the sword, and also killed a number of Laomedon’s sons at the same time. One son, Podarces, would be spared from death following the intervention of Hesione.

Alternatively, in a much less common myth, Priam was absent from Troy when it was taken by Heracles, but returned to find his sister abducted, and the rest of his family killed.

Now Telamon was said to be married to Periboea, a woman who would bear to him a son named Ajax, but Hesione also fell pregnant to the king of Salamis, and she too bore a son to Telamon, a son called Teucer.

Some tell of how, many years later, Priam now a powerful king, sent envoys to Telamon in the form of Antenor and Anchise, requesting the return of his sister Hesione. The request though was declined by Telamon.

This is then given as the reason for why Priam did not order Paris to return Helen, when the wife of Menelaus was abducted from Sparta by his son; for was there that much difference between the taking of Hesione and the taking of Helen?

Hesione never returned to Troy, but her son Teucer did, for he was one of the leaders of the Achaean army during the Trojan War, even entering the Wooden Horse, and taking part in the sacking of Troy, his ancestral home.
Contents