Today, the most famous names from Greek mythology are unsurprisingly, the names of Greek gods and goddesses, but of course the stories of Ancient Greek equally concerned the activities of mortals. Heroes such as Perseus and Heracles were revered, and even the actions of kings such as Agamemnon were recorded in great detail.

Agamemnon is of course a central figure from the Trojan War, for it was the Mycenaean king who led the Achaean forces. There were of course two sides in the war, and the city of Troy, at the time, was ruled by King Priam.

Priam was the son of King Laomedon of Troy, probably born to Laomedon’s wife Strymo. Laomedon was known to have had a number of sons, including Lampus and Clytius, and several daughters, including Hesione.

Priam though was not named Priam at this time for he was instead named Podarces, and his change of name has to do with the actions of the Greek hero Heracles and Priam’s father, Laomedon.

Troy would prosper under the leadership of Priam, the city’s walls were rebuilt, and the military strength of Troy would grow. Priam was even said to have led the forces of Troy when allied with the Phrygians in a war against the Amazons.

As money flowed into Troy, through trade, so Priam built himself a magnificent palace; A palace built from brilliant white marble, comprising many hundreds of different rooms.

The Children of King Priam

The relationship between King Priam and his son Paris is arguably the most important one in Greek mythology, for it was Paris who would bring about the downfall of Troy.

As Hecabe was due to give birth to Paris, Aesacus uttered a prophecy about this new son bringing about the downfall of Troy if left to live. King Priam decided that the danger to Troy was great enough that he had his servant, Agelaus, expose the newborn baby upon Mount Ida. The son, who would become known as Paris did not die, as he was first suckled by a bear, before being rescued by Agelaus five days later.

Paris would of course cause the downfall of Troy as his abduction of Helen of Sparta, would bring forth an armada of a thousand ships full of fighting men to the very gates of Troy.

Priam though did nothing to avert the danger to his city when representatives of the Achaean force come to Troy to demand the return of Helen and the stolen treasure, siding with the wishes of Paris that Helen should remain within the city. 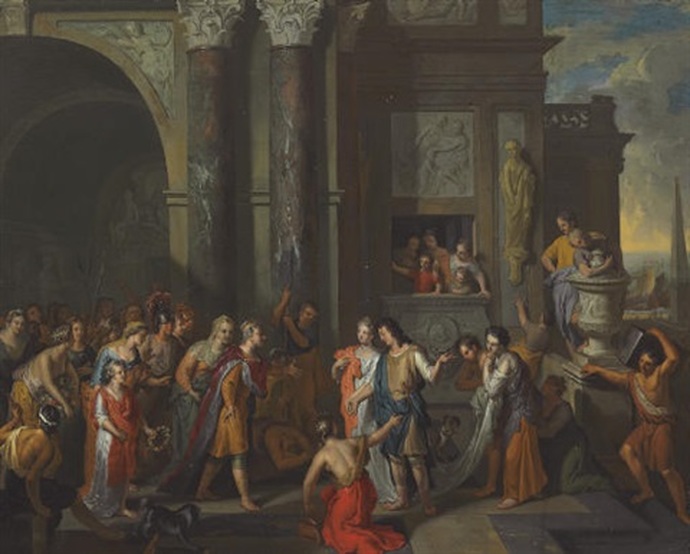 The other children of King Priam would become famous because of their activities during the Trojan War, when the Achaean forces laid siege to Troy for ten years. Priam though was already said to be advanced in age, and so the King of Troy did not take an active role in the defence of the city, and the role of defender of Troy was given to Priam’s son Hector.

During the Trojan War though Priam is famous for one act, for he braved the camp of the enemy when his son Hector was slain by Achilles.

The rage of Achilles had been such that the body of Hector had been desecrated, and the heralds of Troy had been unable to ransom the body. Zeus though looked down on Priam with some pity, and had Hermes escort the king into the Achaean camp. Priam effectively begs Achilles to return the body of his son so that it can buried with honours. The words of Priam move Achilles so that he agrees, and also ensures that a temporary truce follows to allow for funeral games for Hector. 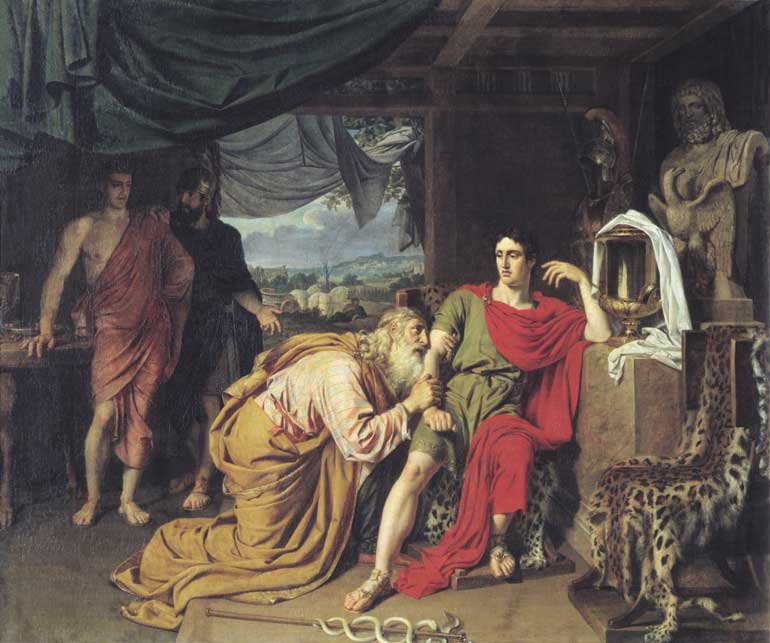 The Death of King Priam

The temple proved not to be a safe haven though, for Neoptolemus chased the wounded Polites, a son of Priam, into the temple, and as Priam sought to defend his son, Neoptolemus deflects the spear thrown at him, and drags Priam down from the temple’s alter, and runs him through.

With the city of Troy in ruins, and the vast majority of the male defenders of Troy dead, and the woman kept as prizes of war, there is no one left to bury King Priam, and he was said to have remained where he died, until the city crumbled away around him. 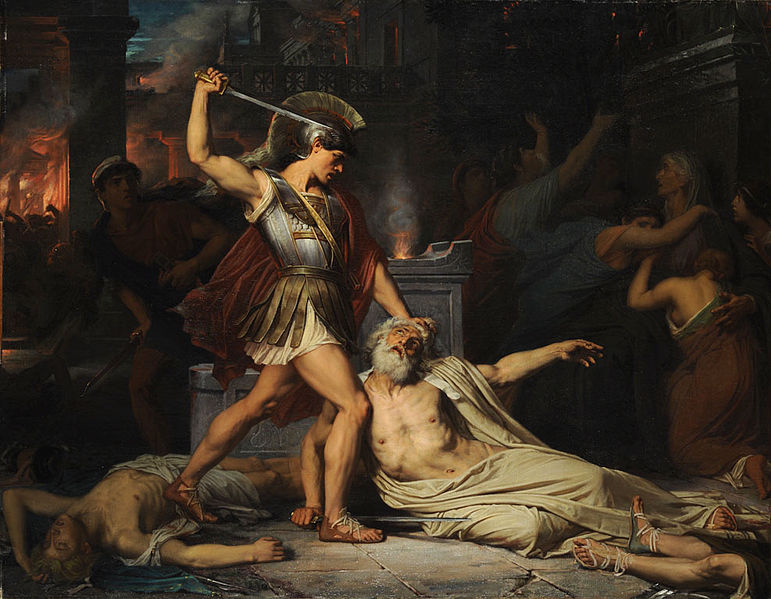