THE HERO MELEAGER IN GREEK MYTHOLOGY

In antiquity Meleager was one of the most well known heroes of Greek mythology; although few people today are likely to recognise the name. Meleager was once named amongst the most famous of Greek heroes, as he sailed onboard the Argo, and was also the leader of the Calydonian Hunters.

The Lineage of Meleager

Meleager was the son of King Oeneus of Calydon in Aetolia, and Queen Althaea, the daughter of Thestius, another king of Aetolia. In the story of Meleager it would prove to be the hero's mother's side of the family who would be pivotal.

The Prophecy of Meleager

Althaea swiftly removed the brand from the hearth, extinguished the flame as she did so, and hid it away in a chest. Althaea had made Meleager virtually invulnerable, for the will of the Moirai was unchangeable by man or god.

Meleager Amongst the Argonauts

Meleager would grow up in Calydon, and would soon become known across Ancient Greece for his skill with the javelin. When word came that Jason was gathering a band of heroes for a quest to Colchis, it was natural therefore that Meleager made his way to Iolcus to join the quest for the Golden Fleece. The skill of Meleager ensured that Jason accepted the prince of Calydon as one of the Argonauts.

During the voyage to and from Colchis, Meleager’s name was not at the forefront of events, but in one version of the Argonauts’ story, Meleager throws the spear which kills King Aeetes; in most versions of the story of the Golden Fleece though, Aeetes is not killed in the quest.

Meleager and the calydonian Hunters

On his return to Calydon it was logical for Meleager, as the son of King Oeneus, to be named leader of all the heroes, the collection of heroes being named the Calydonian Hunters.

Even before the Hunters set off though, Meleager had many problems to resolve.

Meleager was forced to rescue Atalanta from two centaurs, Hylaeus and Rhaecus, when they attempted to rape the Greek heroine; Meleager killing them both.

The band of Calydonian Hunters though was not a harmonious group, and Meleager had to convince many, including the brothers of his mother, Cometes and Prothous, that Atalanta was worthy of a position amongst the hunters. It was an easy argument for Meleager to make though, for the prince of Calydon had fallen in love with Atalanta, seeing in her an equal of himself.

It was a good job that Atalanta was amongst the hunters though, for the Greek heroine proved to be the first one to inflict a wound on the Calydonian Boar, a wound that injured the beast sufficiently for Meleager to finish the job off with a javelin.

The javelin that inflicted the wound was then placed by Meleager within the Temple of Apollo at Sicyon. Meleager then awarded the hide and tusks of the Calydonian Boar to Atalanta, arguing that it was the heroine who had drawn first blood.

It was a a chivalrous act, but one that did not go down well with Meleager's uncles, Cometes and Prothous. They were unwilling for a woman to take the prizes, and demanded that they should be given the hide and tusks if Meleager was not going to take them himself.

So affronted was Meleager, that a heated argument took place between the hero and his uncles, and in that argument Meleager would kill them both.

Atalanta did take the prizes, and would ultimately depart from Calydon alone. 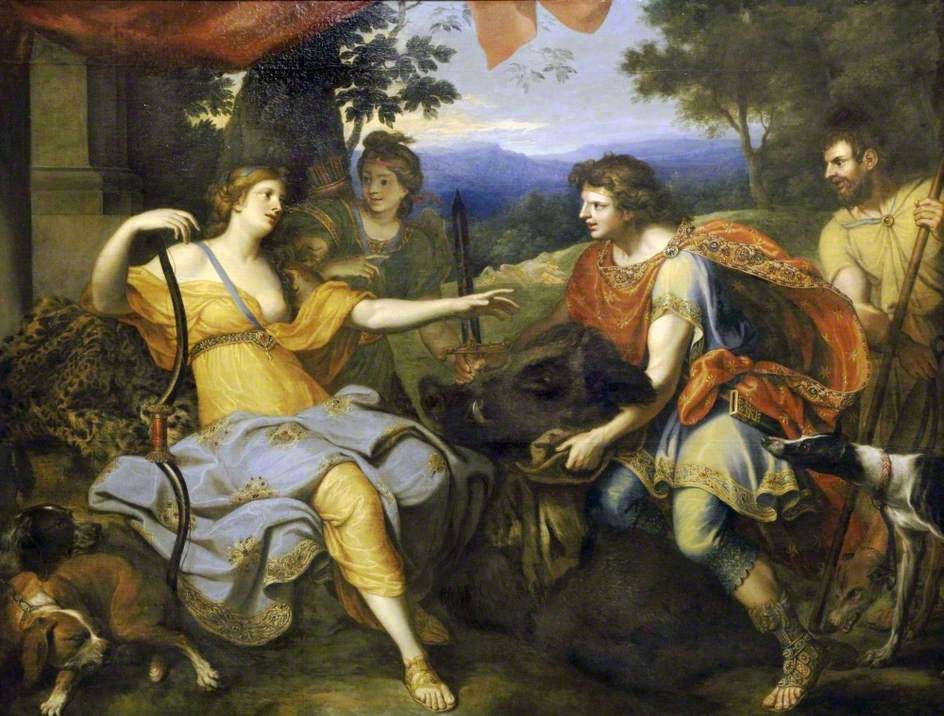 A Tale of Meleager's Death

The reason why Atalanta was said to have departed alone, was due to the fact that Meleager was said to be dead by that point. The most prosaic story of Meleager's death effective comes at the hands of Althaea, Meleager's own mother.

News of the death of Althaea's brothers at the hands of her son eventually reached the main Calydonian Palace, and upon hearing the news Althaea went straight to her bedroom chest, removed the wooden brand, and threw it once again into the fire. The love Althaea held for her brothers seemed to outweigh the love of her own son.

The brand would burn once again, and when the last of its wood was consumed by flame, Meleager dropped down dead.

Once she had done the deed, Althaea was said to have committed suicide. 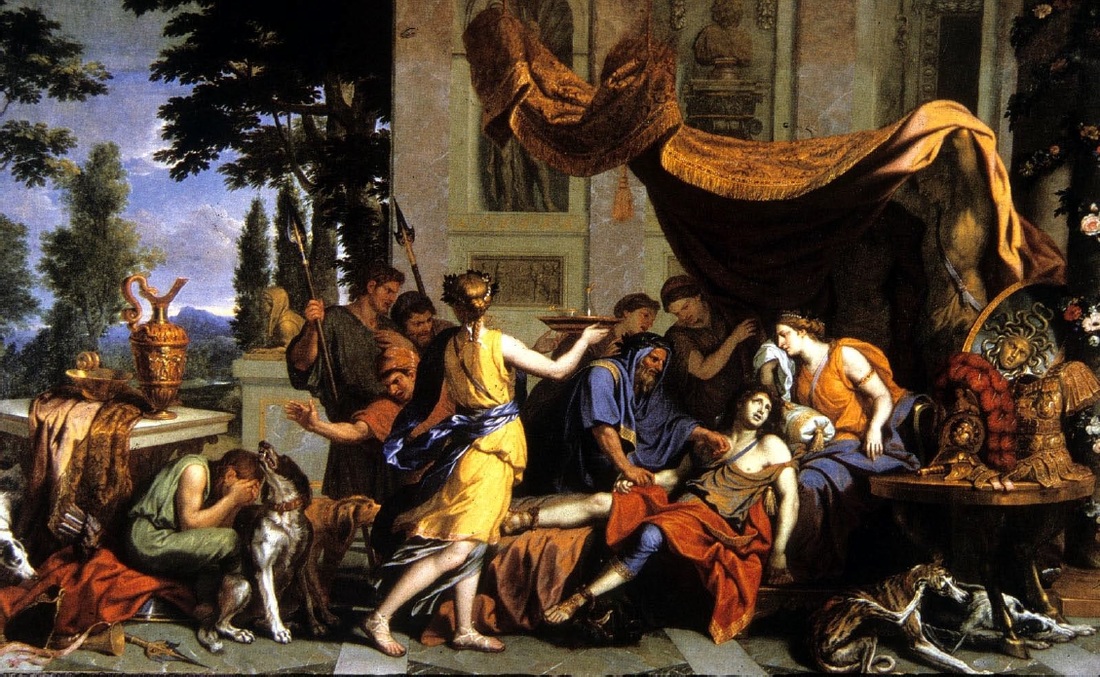 A Second Tale of Meleager's Death 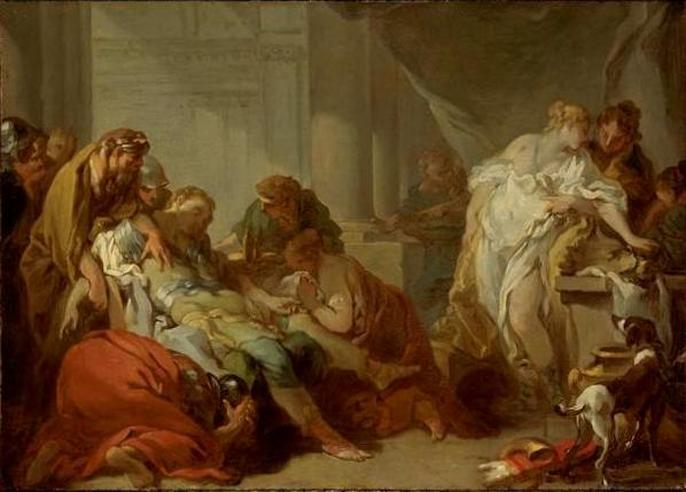 The family of Meleager

At some point of his life, Meleager was married to a woman named Cleopatra, who became mother to Meleager's daughter Polydora. Cleopatra was said to have hung herself when she learned of Meleager's death, in the same manner that her mother-in-law had. In a similar vein, Polydora would also hang herself, when her husband Protesilaus became the first Achaean hero to die at Troy.

Meleager himself came from a large family with at least 6 brothers and 4 sisters. Five brothers were said to have died fighting the Curetes, these being Ageleus, Clymenus, Periphas, Thyreus and Toxeus. A sixth brother, Tydeus, would be named as one of the Seven Against Thebes, and he would also be father of the Greek hero Diomedes.

Gorge a sister of Meleager would be mother of another Achaean hero, Thoas, by Andraemon. Two other sisters of Meleager, Eurymede and Melanippe, would be transformed into guinea-fowl (Meleagrides) by the goddess Artemis, because they grieved so much for their lost brother.

Even after death the story of Meleager would continue, at least briefly, for it was said that one hero was encountered by another in the Underworld. Heracles had entered the realm of Hades, and there spoke with Meleager; Meleager would ask Heracles to marry Deianira, another sister of Meleager. Heracles did indeed marry Deianira, although this hardly worked out well for Heracles.
Contents