THE ARGONAUTS IN GREEK MYTHOLOGY

The Gathering of Heroes

The story of Jason and the Argonauts is amongst the most famous tales from Greek mythology, and even the modern day it is the myth most often retold.

The story of Jason and the Argonauts of course deals with the quest of Jason to bring back the Golden Fleece from Colchis to Iolcus; and in order to achieve this, Jason had to surround himself with a band of heroes.

The gathering of heroes was a core element of many famous Greek myths, and after all it was the premise for the stories about the Trojan War; the quest of the Argonauts took place a generation before the events at Troy.

The Argo and the Argonauts

Argonauts in the Ancient Texts

As with all such gatherings in Greek mythology there is no definitive list of just which Greek heroes made up the crew of the Argo.

Most often, a list of Argonauts is taken from the Argonautica by Apollonius Rhodius written in the 3rd century BC; but even by this time the story of the Argonauts was old, because the adventure had been referred to a hundred years before in Medea by Euripides.

The Argonautica is not the only ancient source to tell of the Argonauts though, and other names, some the same and some different can be found in these sources. The Bibliotheca (Pseudo-Apollodorus) lists 44 names, Fabulae (Hyginus) gives 63, the Argonautica by Gaius Valerius Flaccus, tells of 51 heroes, and the Argonautica Orphica, gives the names of 50 Argonauts.

In total, from the five sources 85 different names are ascertained.

The Agreed Upon Argonauts

Meleager – Meleager was a prince of Calydon, born to King Oeneus and Althaea. Although not amongst the most prominent of the Argonauts, Meleager’s fame would come later when he would lead the Calydonian Hunters in his homeland.

Orpheus – Orpheus was the son of Oeager and Calliope, and was a hero and a noted musician. Orpheus’ music would allow the Argo to pass the island of the Sirens virtually unharmed, and would also had resolve to the other heroes in times of danger. After the quest of the Golden Fleece, Orpheus is most known for his descent into the Underworld to retrieve his wife, Eurydice.

Peleus – Peleus was the son of Aeacus and Endeis, and also famously the father of Achilles by the Nereid Thetis. In his life Peleus had many adventures, but whilst on board the Argo, Peleus was noted because he was used as a messenger between the goddess Hera and the other Argonauts.

Telamon – Telamon was another son of Aeacus and Endeis, who also had famous children in the form of Ajax the Great and Teucer. Telamon also had his own adventures and was an occasional companion of Heracles, but during the journey to and from Colchis, Telamon acted as the prominent critic of Jason’s leadership.

Other prominent individuals mentioned by one or more sources also included Admetus, King of Pherae, Deucalion, prince of Crete, Eurytion, King of Phthia and father-in-law of Peleus, Iolaus, nephew and charioteer of Heracles, Nauplius, a hero blessed with long life, Nestor, another long lived hero, Oileus, father of Ajax the Lesser, and Poeas, father of Philoctetes.

Some names mentioned in later versions of the myth though make little sense and cannot be reconciled with other Greek myths; with names including, Asclepius, the demi-god and noted healer, Laertes, the father of Odysseus, Philoctetes, the Achaean archer from the Trojan War, and Theseus, the slayer of the Minotaur.
​
The addition of fanciful names is most likely a case of embellishing the story to make the quest even more heroic than it was, but in the case of Theseus the story makes no sense, for it was said that Theseus and Patroclus were imprisoned in Hades at the time, and the timeline of Theseus has the hero meeting Medea for the first time after the voyage of the Argo.

The Changing Composition of the Argonauts

The quest undertaken by the Argonauts was also a dangerous one, and some were killed during the voyage to and from Colchis; with Idmon killed by a wild boar, Mopsus died from an encounter with a poisonous serpent, and Tiphys succumbed to a mysterious illness.

At other times the number of Argonauts were also bolstered, and the four sons of Phrixus and Chalcioppe, (Argus, Cytisorus, Melas and Phrontis) would join the crew. Likewise, on the return journey, Medea the daughter of King Aeetes, also came with the Golden Fleece, having fallen in love with Jason. 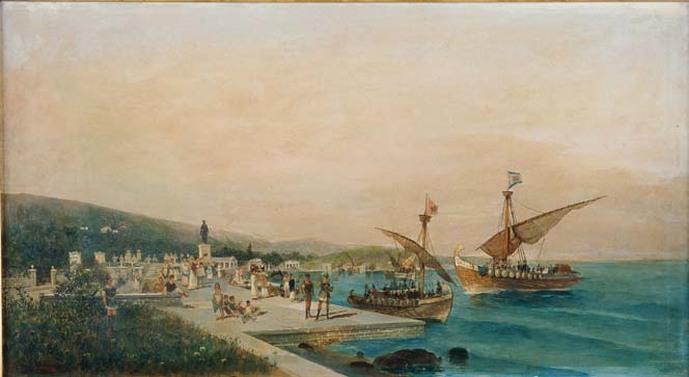