THE SIGNS OF THE ZODIAC GREEK MYTHOLOGY

​The idea of the 12 Signs of the Zodiac is one that goes back thousands of years, and most people will be able to name several of the Zodiac signs, even if they have no interest in astrology.

The names used today, in the western world, for the 12 Signs of the Zodiac are taken from the Roman period some 2000 years ago. The Romans though were simply building on the work undertaken by Babylonian and Greek astronomers in the centuries before.

Behind each Latin name of a sign of the Zodiac is a story though, a story linked with a tale, or tales, from Greek mythology. 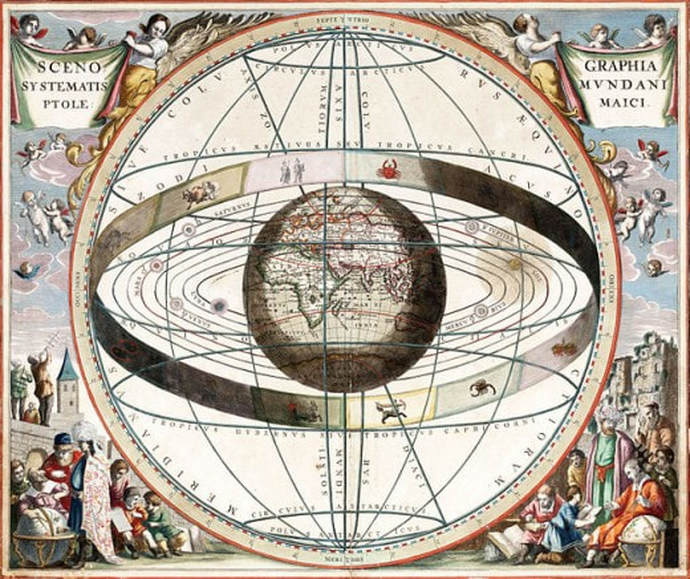 ​It is another creature from Greek mythology that is represented by Taurus, this time the Cretan Bull.

As the name suggests, the Cretan Bull is primarily connected with the island of Crete, for it was sent to the island by Poseidon as a symbol that the gods were pleased with Minos, and that the son of Europa should be the next king of Crete.

Minos was supposed to sacrifice the magnificent bull, but so taken with it was Minos, that he sacrificed an inferior beast instead. Poseidon would thus cause Pasiphae, the wife of Minos to fall in love with the bull, and as a result the Minotaur was born.

The Cretan Bull would ravage Crete until it was captured by the hero Heracles as he undertook his 12 Labours, as set by King Eurystheus. Heracles took it back to Tiryns, but when it was subsequently released the bull would terrorise Marathon, whence it became known as the Marathonian Bull.

The Bull would eventually be killed by Theseus, with its likeness placed amongst the stars as Taurus.

Carcinus was a crab of monstrous size that was dispatched by Hera to distract Heracles when it appeared that he was about to overcome the Lernaean Hydra. Carcinus though did little to distract Heracles, for the Greek hero simply crushed it beneath his foot, and then continued killing the Hydra.

Hera though would place the likeness of the monster amongst the stars as the constellation Cancer.

Leo, the Lion, is the fifth sign of the Zodiac, and another of the animals encountered by Heracles during his 12 Labours, with Leo representing the Nemean Lion.

The slaying of the Nemean Lion was the first Labour given to Heracles by King Eurystheus, with Eurystheus believing that Heracles would perish, just as all others had done. When Heracles realised that his weapons could not kill the Nemean Lion, the Greek hero instead wrestled with it, strangling it.

Again, for its efforts in trying to kill Heracles, Hera placed the beast amongst the stars as Leo. 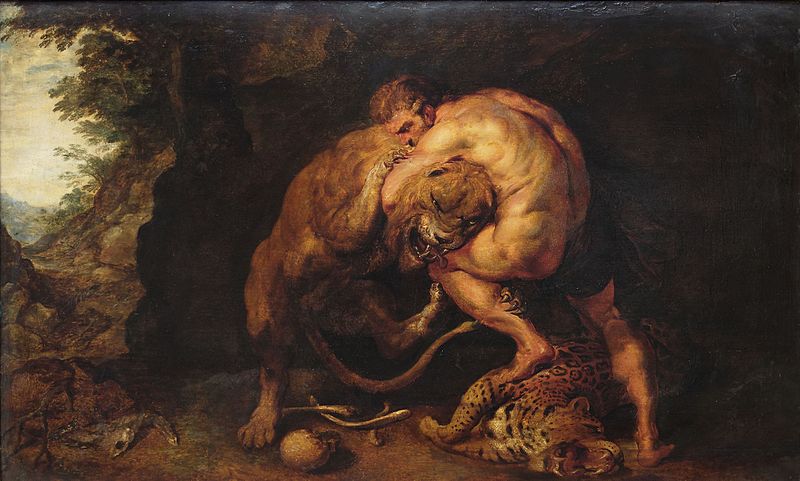 Lying between Virgo and Scorpio, it is most common to suggest that the scales of Libra, were the scales of Justice as used by Astraea, who herself is represented within Virgo. Astraea though was not the only Greek goddess of Justice, for Themis was also named such, and so the scales have been linked with this goddess as well.

​In Greek mythology, Scorpio, the Scorpion, represented another monstrous creature, this time a giant scorpion named Scorpius. Scorpius was said to be a child of Gaia, the Greek protogenoi goddess of the earth, with Scorpius being put to use by its mother.

Scorpius would be sent against the Greek hero hunter Orion. Orion was a troublesome mortal for the gods, as although Orion was an occasional companion of gods and goddesses, especially in the hunt, he also ended up antagonising them as well.

One day, it was said, that Orion boasted of his own greatness as a hunter, proclaiming that he would hunt down all beasts found upon the earth. This proclamation antagonised Gaia to such a degree that hunter became the hunted when Scorpius faced Orion, and the sting of the scorpion ended up killing the hunter. Both Scorpius and Orion would subsequently be found amongst the stars.

Thus, an alternative Greek mythological tale linked to Sagittarius sees the Archer named as Crotus, a satyr. Crotus was a son of the god Pan, who some tell invented the hunting bow, and was a companion of the Muses of Mount Helicon; thus it was the Muses who requested Crotus be placed amongst the stars as Sagittarius.  ​ 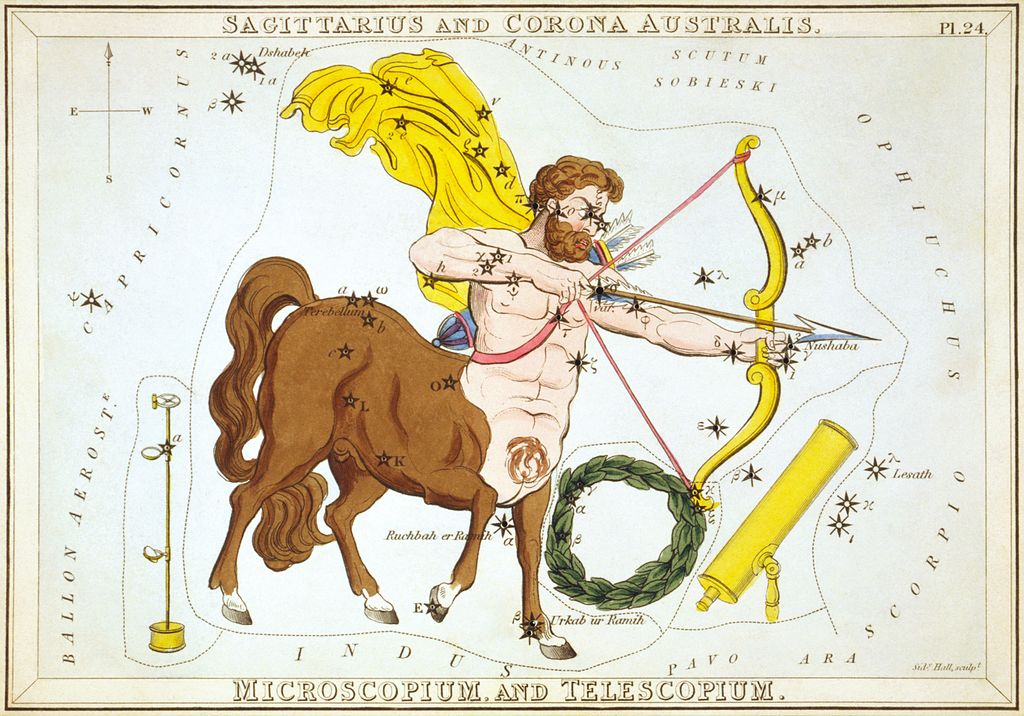 Sagittarius as depicted in Urania's Mirror, a set of constellation cards published in London c.1825

​Like Sagittarius before, the sign of the Zodiac named Capricorn, is another constellation with different creation myths.

Some tell of Capricorn, the Sea-Goat, being a likeness of the goat suckled by Zeus when the supreme god was a babe; some call this goat Amalthea. Others tell of Capricorn being the representation of the god Pan, whilst others say it is a Panes called Aegipan, who may or may not have been Pan.

Aegipan was a minor god who appears in Greek mythology twice assisting Zeus as he did battle. In the first case, Aegipan sided with Zeus during the Titanomachy, and when Aegipan entered the battlefield he would emit such a noise that would cause Titans to flee.

Aegipan also appears during the uprising of Typhon, and whilst gods fled before Typhon, Aegipan would return to assist Zeus when Typhon took the sinews of Zeus, Aegipan retrieved them, and made Zeus whole once again.

For his assistance Zeus would place Aegipan amongst the stars as Capricorn.
When Typhon and Echidna went to war with the gods and goddesses of Mount Olympus, all fled before them. Most of the deities would seek refuge in Egypt where they were then worshipped under new names, but Aphrodite and Eros were in the Middle East when Typhon approached. To escape the mightiest of all monsters, Aphrodite and Eros transformed themselves into fish, and dived into the River Euphrates to enable their escape.

In thanks for their escape, the likeness of the deities, as fish, was placed in the heavens as Pisces. 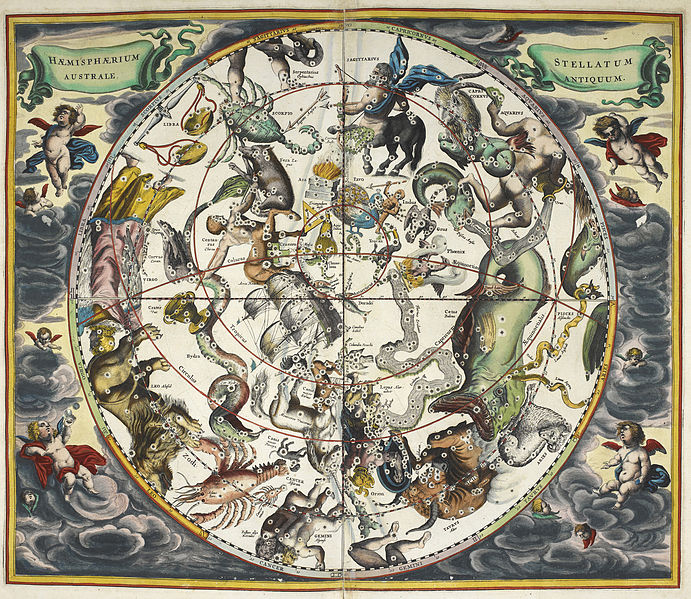 The constellations, with astrological signs of the zodiac - Andreas Cellarius (1596–1665) - PD-life- 70
Contents