THE FIRST SACKING OF TROY IN GREEK MYTHOLOGY

​Troy is arguably the most famous city to appear in the stories of Greek mythology, after all, Troy was the city around which a ten year war was fought, as famously recounted in the Iliad.

The fall and sacking of Troy are famous events in Greek mythology, but many people would be surprised to learn that this Sacking of Troy, was but the second fall of the mighty city, for a generation before the city of Troy had fallen to Heracles.

The City of Troy

Troy was the predominant city of the Troad, founded by Ilus, a prince of Dardania.

Troy, then known as Ilium had been founded four generations after the Deluge, for Ilus was the great-grandson of Dardanus, one of the survivors of the Great Flood. Ilus would change the name of Ilium to Troy, named for Tros, Ilus’ father, and the city prospered.

Ilus would be succeeded to the throne of Troy by his son Laomedon, and under Laomedon, Troy became one of the richest cities in the ancient world.

Apollo and Poseidon left Troy, but as they did so, Apollo sent forth pestilence and plague upon the city, whilst Poseidon caused a tsunami to swamp the land around Troy, before sending forth a sea monster, the Trojan Cetus, to ravage the seaward side of the city, killing the unwary.

Laomedon now sought ways of dealing with the combined threats facing Troy, but the response from the oracle consulted saw Laomedon having to sacrifice maidens of Troy to the sea monster. Lots would be drawn as to who was to be sacrificed, but after but a short period of time, the name of Hesione, Laomedon’s own daughter was drawn.

All though was not lost for Laomedon, but as Hesione was being tied up as the sacrifice to the Trojan sea monster, Heracles, the Greek hero and demi-god arrived at Troy.
One less common version of the fight though, has Heracles descending into the stomach of the monster, and then attacking the insides of the beast with his sword.

In either case, the Trojan Cetus was now dead, and Hesione was rescued. 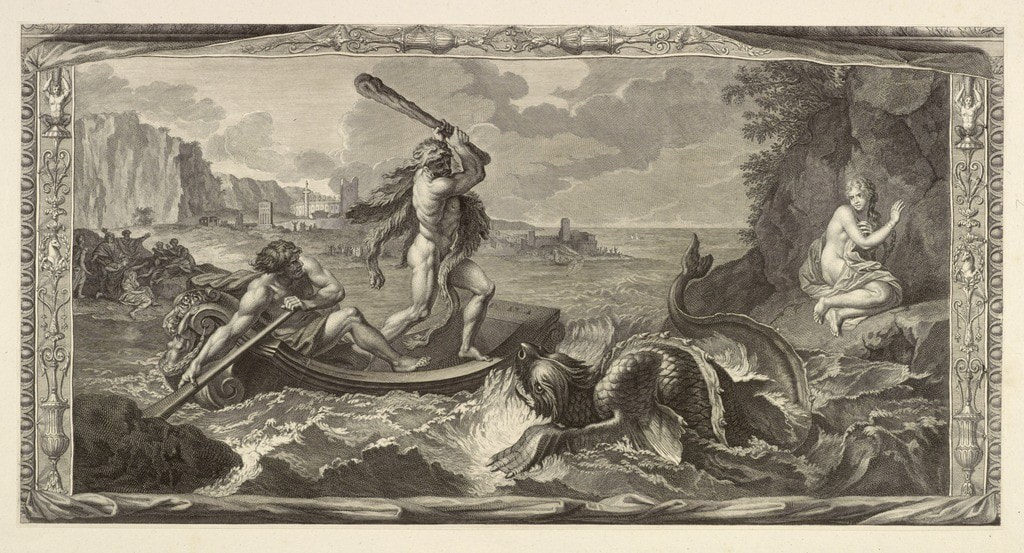 Now though was the time of Laomedon’s second bad decision, and having not learned from his previous error, now refused to pay Heracles; Laomedon perhaps claiming that the Golden Vine and horses were worth more than his daughter or even his city.

Heracles was of course as angry as Poseidon and Apollo had been, but Heracles could not linger at Troy, but he promised to return.

The First Siege of Troy

Heracles would keep his promise and returned to Troy, but he did not come alone for he brought help with him, with 6 ships of men, and a comrade-in-arms, Telamon.

As the ships unloaded, Laomedon would lead his army against the invading force, but the Trojans made no great headway, and were soon forced back into the city; but Laomedon felt safe behind his new walls.

Heracles began to besiege Troy, but whilst the walls constructed by Poseidon seemed impenetrable, the walls built by Aeacus were not as strong; and perhaps Telamon had some secret knowledge about weaknesses in the walls, for Aeacus was Telamon’s father.

The siege of Troy did not last long, unlike the ten year siege a generation later, for Telamon soon breached the walls of Troy, and the besieging force now found easy entry into Troy.

It was perhaps a mistake on Telamon’s behalf not to allow Heracles the honour of first entering Troy, but Heracles was soon appeased, and the demi-god set about gaining his revenge upon Laomedon. Heracles would kill King Laomedon of Troy, and he also dispatched the sons of Laomedon.

Hesione, the daughter of Laomedon, did not stay in Troy with her ransomed brother though, for Hesione was given by Heracles to Telamon as a war prize, and subsequently Hesione would give birth to a son of Telamon, Teucer, a son who would later return to Troy as an Achaean leader.

Now some in antiquity said that this sacking of Troy came from the imagination of some writers, for how could six ships of men take Troy in a matter of days, when a thousand ships of men toiled for ten years without the walls being broken?

Therefore perhaps the battle for Troy, and the killing of Laomedon and his sons did not occur within the walls of Troy but without. In this case, it would appear that Heracles lured the Trojan army out of Troy with reports of a landing further up the coast.

Laomedon and his men would find no such landing, but on their return back to Troy, were ambushed by Heracles and his men, and all were killed. In this case, Podarces/Priam was not killed for he was away in another part of the kingdom at the time.

Now with no king and no army to defend it, Troy simply opened up its gates to allow entry to Heracles, and whilst Hesione was taken, there was thereafter no sacking of Troy.
Contents