THE GOD CHRONUS IN GREEK MYTHOLOGY

Chronus was a god of the Greek pantheon, and he is arguably one of the most interesting of all Greek gods and goddesses.

Generally speaking, Chronus can be regarded as the Greek god of time, or Father Time, but the deity appears only sparsely in surviving texts, and yet in these surviving texts it is clear that he was integral to some people’s interpretation of the creation myth.

The Birth of Chronus

The most famous story of creation from Greek mythology tells of Protogenoi emerging from nothingness, with first ﻿Chaos﻿, then Gaia, Eros and Tartarus coming into existence; and Hesiod’s version doesn’t mention a god called Chronus at all.

Other versions though, state that the Chronus was the son of Hydros, a primordial water god, and Gaia, the Protogenoi of the earth; or else he was born fully formed when the universe came into existence.

It was at this time that Chronus would become a “Father Time” figure, an old man with white beard, and holding on to an hourglass and sickle; and even today it is this imagery that is still thought of when people think of Father Time. 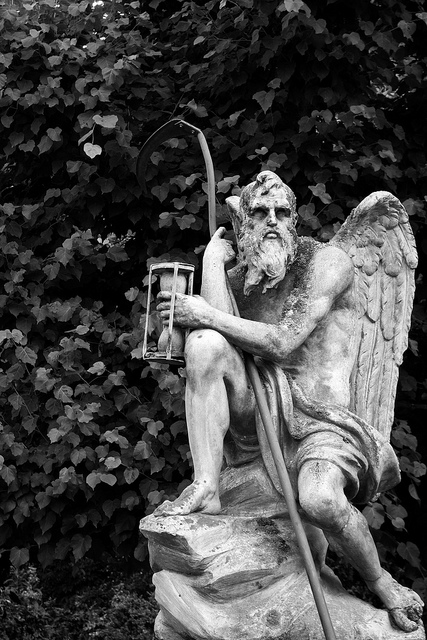 In this Orphic tradition, Chronus was said to work alongside a female equivalent goddess, Ananke, the Greek goddess of Inevitability; and the pair would ultimately bring order to the cosmos. The tails of the serpent deities, would encircle the world-egg, and as this occurred, the egg would split open bringing forth the earth, sea and the sky. The tails of Time and Inevitability would thereafter be involved in everything for all time.

The opening of the world egg also brought forth the primordial deity Phanes. Other Protogenoi were also thought to have been born to Chronus and Ananke, with Aither (Air), Chaos (Gap) and Erebus (Darkness) often named as their offspring.

In English, Chronus is often written down as Khronos or Chronos, and so it is easy to see how the Protogenoi god of time could be confused with the Titan god Cronus, (Kronos). This has meant hat, over the centuries, the two gods who were once distinct, being confused with each other and the Greek gods taking on the other’ attributes.
Contents