THE HERO CADMUS IN GREEK MYTHOLOGY

Today, most people associated the name of Thebes with the Egyptian UNESCO site, in antiquity though, Thebes was also the name given to one of the most important cities of Ancient Greece.

The City of Thebes

In antiquity, Thebes was a rival to Athens and Sparta, and would normally be the antagonist to whichever of those two city-states was in the ascendancy at the time. Thebes itself would never quite make it to being the dominant city of Greece, and when it stood against Alexander the Great in 335BC, the city was destroyed. Thebes would never subsequently recover, and today it is but a small market town.

Historical fact mixes with mythology though, and as with most settlements of Ancient Greece, there is a myth to the founding of Thebes; a myth that starts with Cadmus.

The Story of Cadmus Begins

Phoenix would stop his search in North Africa, and found part of Phoenicia, Cilix would found Cilicia in Asia Minor, and Thasus would found Thassos.

Cadmus would have his own journey. 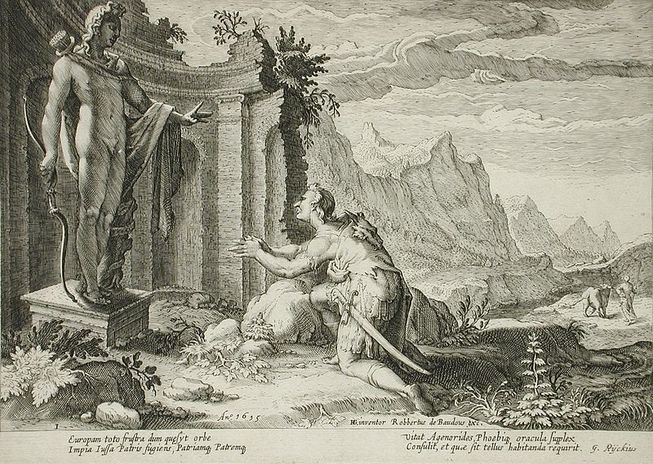 Cadmus' search, and a Change of Destination

When his men failed to return from gathering water, Cadmus went to the spring, finding his men dead, Cadmus sought revenge upon the serpent. An epic fight between man and serpent ensued, but eventually Cadmus won out, killing the serpent. Killing the serpent though would cause further problems for Cadmus, and in penance to Ares, Cadmus was forced to spend eight years in the servitude of the god.

In some versions of the tale the period of servitude started immediately, and in others occurred at a later date. 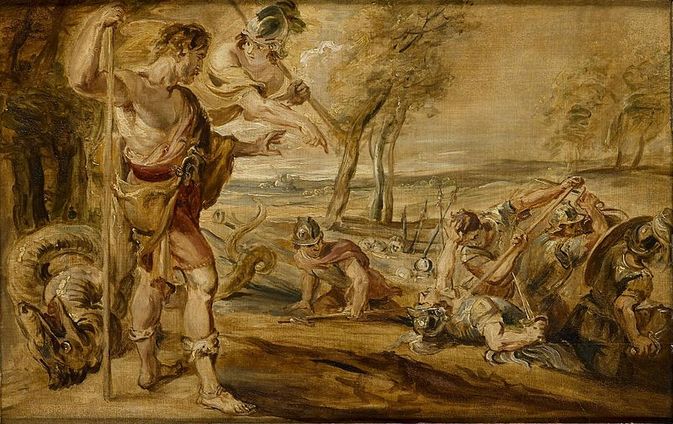 The Founding of Thebes

Fearing for his life, Cadmus through a stone amongst the men, and they men started fighting amongst themselves. Eventually only five men were left.
These five men would be known as the Spartoi, and it was they who would assist Cadmus in the building of the new city, and subsequently the Spartoi would become the ancestors of the prominent families of Thebes.

The remaining teeth of the serpent were given to Athena, and they would eventually make their way to Colchis, and become a danger for Jason to face.

Cadmus and the Spartoi would build up the city around a citadel, and the city would be known as Cadmeia. To honour the creation of the city, Zeus and Athena arranged for the marriage of Cadmus to Harmonia; although is some stories the marriage occurred on Samothrace.

Some say that it was at this point hat Cadmus, and Harmonia, were changed into serpents, although if the transformation of Cadmus had occurred at an earlier point, then it was instead said that Cadmus and Harmonia would subsequently spend eternity together in Elysium, the paradise of the Greek afterlife.

As to the city that Cadmus founded, a couple of generations later, during the reign of Amphion and Zethus, the name of the city would be changed from Cadmeia to Thebes, in honour of Zethus’ wife, Thebe. The name Cadmeia would remain in use though, as it was passed onto the citadel of the city.
Colin Quartermain - Cadmus - 14th March 2016