The heroes of Ancient Greece are amongst the most famous characters to appear in the stories of Greek mythology, and the likes of Heracles and Jason have instantly recognisable names. The names, and indeed the deeds, of many other Greek heroes though, have been overlooked by many, but in antiquity the likes of Bellerophon was a famous figure.

The name of Bellerophon is one which appears in the works of Hesiod, as well as the Iliad by Homer, and the Bibilotheca by (Pseudo-)Apollodorus; and although the writers do not always agree on details, a time line of Bellerophon’s life can be ascertained.

Nominally, Bellerophon was considered to be the son of King Glaucus of Ephyra (Corinth), and his wife and queen, Eurymede. This would make him a grandson of Sisyphus.

Some would say that Glaucus himself could not have any children, for Zeus had punished Glaucus for the sins of his father, and as a result Bellerophon was actually a son of the sea god Poseidon.

It was also said that Bellerophon was actually initially named Hipponous but would be given a name whilst still a young man, when he slayed Bellerus, a Corinthian noble.
Details of the death of Bellerophon’s brother, or indeed Bellerus, are not eluded to in the surviving sources, but it is known that Bellerophon would seek absolution for his crime from the king of Argos.

Kings of Ancient Greece had the power to absolve individuals of crimes, a fact often alluded to in the adventures of Heracles; and so Bellerophon would seek out Proetus, co-King of Argos, who had his seat of power in Tiryns.

King Proetus would welcome Bellerophon as a worthy guest into his palace, after all, Bellerophon was a prince of neighbouring kingdom, and youth who already had the fighting skills expected of a hero. Proetus though was not the only one in the royal court to take a shine to Bellerophon, for Queen Stheneboea would become infatuated by the Corinthian prince.

Stheneboea would attempt to seduce Bellerophon, but Bellerophon rejected the advances; probably because of respect for his host. Rejection did not sit well with Stheneboea though, and in an act of retribution, the queen would falsely tell Proetus that Bellerophon had tried to force himself upon her.

Proetus believed his wife, but could do little with this information, for to cause harm to a guest, was considered one of the greatest wrongs that could be undertaken, and would bring down the wrath of the Erinyes upon him.

Proetus decided that no harm could come to Bellerophon in his own kingdom, but the same didn’t apply in another kingdom, and so Proetus convinced Bellerophon that he should travel to Lycia. Lycia at the time was ruled by King Iobates, the father of Stheneboea, and the man who had helped Proetus to reclaim his part of the inheritance.

Proetus believed that Iobates would kill Bellerophon for having tried to rape Stheneboea, but when Bellerophon arrived in Lycia, Iobates was faced with the same problem that Proetus had been, and was wary of invoking the anger of the Erinyes.

Instead, Iobates set Bellerophon a heroic quest, one which the king of Lycia assumed would cause the death of Bellerophon, for the quest was the slaying of the Chimera. 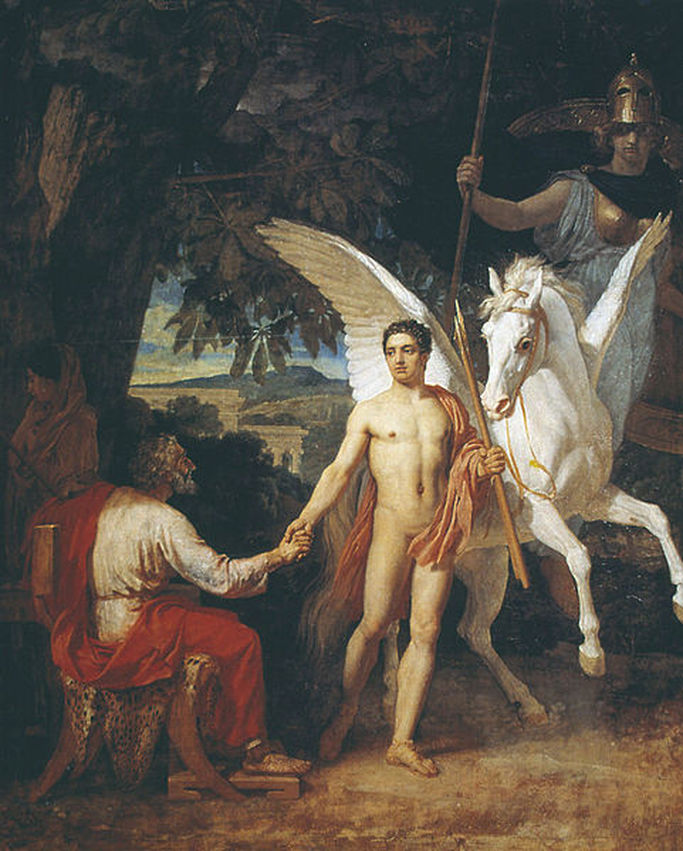 Bellerophon and the Chimera

Aiming true, Bellerophon directed his lance into the mouth of the Chimera, and as he did so, the fiery breath of the monster melted the lead, causing it to flow down its throat. Subsequently, the lead hardened again, suffocating, and killing the Chimera.

Bellerophon and the Solymi

Bellerophon and the Palace Guards

News of Bellerophon’s victory over the Amazon reached Iobates before the hero, and so the king of Lycia made one last plan to kill Bellerophon, and this time the palace guards, and thus the strongest of the Lycian warriors, were placed in ambush. Strong as these warriors were, they were no match for Bellerophon and Pegasus, for once again Bellerophon ensured he was positioned out of harm’s way; and so the ambush failed in its attempt.

Bellerophon would become father to two sons by Philonoe, Isander, who would later die fighting the Solymi, and Hippolochus, who became father of Glaucus, one of the defenders of Troy.

Bellerophon was also father to one or two daughters, for named daughters were Laidameia and Deidameia, although this might be the names of a single daughter. In some versions of the Sarpedon myth, Deidameia, was the mother of that defender of Troy.

Neither the fall, nor the landing, killed Bellerophon, but it did leave him crippled and blind. Subsequently, Bellerophon was shunned by both god and man, and died alone. Some, in antiquity, would tell of how the tomb of Bellerophon could be found in the hilltop citadel of Tlos in Lycia.
Colin Quartermain - Bellerophon - 2nd February 2017
Contents