Meriones is a name that appears in Greek mythology, coming to the fore during the Trojan War, when Meriones appeared as one of the Achaean heroes.

Meriones was a Cretan by birth, born to Molus by a woman called Melphis. Molus himself was an illegitimate son of Deucalion, son of Minos, and so Meriones ancestry could be traced back to Zeus and Europa. More importantly, during the Trojan War, Meriones’ close family included Idomeneus, Meriones effectively being Idomeneus’ nephew.

Meriones was certainly brave, for the Cretan hero offered to fight Hector, the greatest of the Trojan defenders, and also volunteered to accompany Diomedes when a scout of the Trojan camp was called for.

Although Diomedes turned down Meriones in favour of Odysseus, Meriones also displayed generosity, for he equipped Odysseus for the task ahead, including giving him the prized helmet of Amyntor. This helmet had once been stolen by Autolycus, Odysseus’ grandfather, although Meriones inherited it from his father Molus.

Meriones’ bravery was once again on display when the Cretan followed Patroclus on to the battlefield, as the Achaean’s, devoid of Achilles, sought to protect their ships. Patroclus would fall to the spear of Hector, but whilst the armour of Achilles was stripped from Patroclus, Meriones, fighting alongside Ajax the Great, prevented the body of Patroclus from being mistreated by the Trojans.

Ajax the Great and Meriones would be joined by Ajax the Lesser and Menelaus, and it was Meriones and Menelaus who carried the body of Patroclus from the battlefield, back to the camp of Achilles. 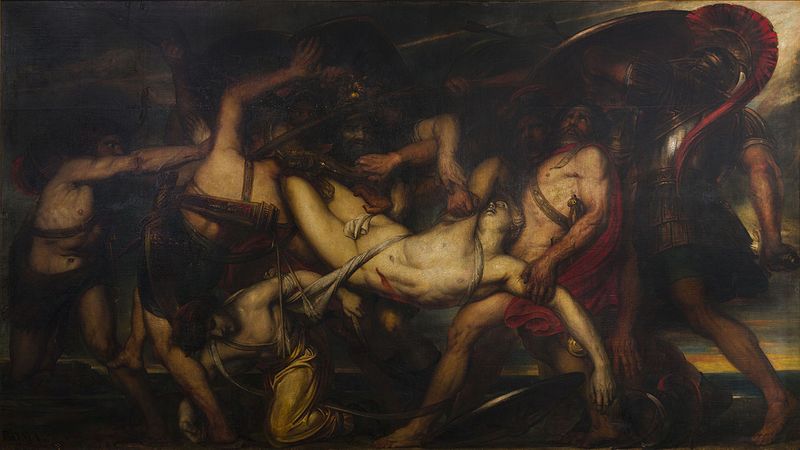 The Funeral Games for Patroclus

Meriones would also distinguish himself during the subsequent funeral games of Patroclus. In the first event, chariot racing, Meriones acquitted himself well coming fourth whilst Diomedes triumphed.

In the seventh event, Meriones did far better, for the Cretan won the archery contest, defeating the famed archer Teucer in the process.

The eighth event was to be a spear throwing contest between Agamemnon and Meriones, although the contest did not go ahead, for Achilles gave the prize to Agamemnon, recognising that the Mycenaean king had no equal in spear throwing.

Meriones and the Sacking of Troy

​​Meriones would subsequently use his fighting skills, honed at Troy, to battle with the neighbours of the Cretan colonists, greatly enlarging the land under their control.
Contents