Amphion was a legendary king of Thebes in Greek mythology. A son of Zeus, Amphion would initially rule Thebes alongside his twin brother Zethus, but more famously, Amphion was married to Niobe, and was thus father of the Niobids.

​Amphion is forever associated with the Greek city of Thebes, but he, and his twin brother Zethus were not born there.

The story of Amphion though, does start in Thebes, for there resided Antiope, the daughter of Nycteus, the usurping ruler of the city. Taken by the beauty of Antiope, Zeus would come to Antiope in the disguise of Satyr, for Antiope was a follower of Dionysus, and Zeus would thus lay with Antiope.

Later, Antiope knowing that she was with child fled from Thebes, fearing the reaction of her father if he was to discover that she was pregnant.

​Whilst Amphion grew into adulthood, in Thebes, his mother was being treated no better than a slave by Lycus, and his wife Dirce.

Amphion and the Death of Dirce

​Eventually Antiope would escape from Thebes, with the help of Zeus, and she then sought sanctuary upon Mount Cithaeron; Antiope was thus guided to the house where Amphion and Zethus lived, although it took time for mother and children to recognise each other.

When Amphion and Zethus discovered the manner in which there mother had been treated, they sought revenge upon Dirce and Lycus.

Thus, it was that Dirce was located by Amphion and Zethus, and the queen of Thebes was tied to a bull, whereupon she was dragged to her death. Amphion would then throw the body of Dirce into a well. Some also tell of Amphion killing Lycus, although others tell of Lycus being sent into exile instead.

Amphion Builds the Walls of Thebes

Thebes had grown greatly since the time of Cadmus, when it was the citadel, the Cadmea, that was fortified, and so Amphion and Zethus decided to build new defensive walls around the city. Whilst Zethus toiled away though, Amphion played his lyre, and such was the beauty of his music that the stones moved by themselves, fitting perfectly together, to make some of the biggest and strongest walls of the day.

It was in the time of Amphion that the famed seven gates and seven towers of Thebes were built. 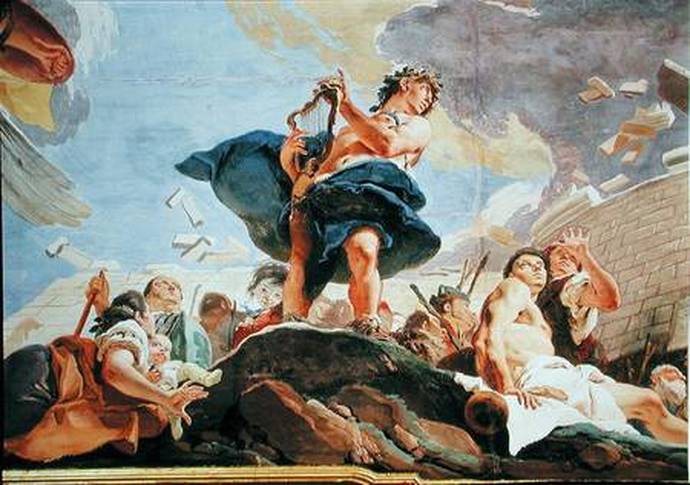 The family line of Tantalus was cursed for generations by the actions of Tantalus and his descendants, and Niobe managed to anger the gods just as so many of her relatives also did.

The Hubris of Niobe

​Amphion would become father to a number of children by Niobe, although how many children differs between sources, some tell of 10, 12, 14 or 20 children, but in any case there were an equal number of boys and girls.

The birth, and survival, of so many children caused Niobe to utter a rash proclamation, for the Queen of Thebes, asked whether she should not be treated as a goddess, for surely she was superior to Leto, the Greek goddess of motherhood, as Leto had given birth to just two children.

Now no goddess would accept such an affront to their dignity, and as the children of Leto were Apollo and Artemis, neither were they going to allow such an insult to go unpunished.

Thus it was that Apollo and Artemis came to Thebes, and unleashing their bows and arrows, all of the children of Amphion (save perhaps Chloris) were killed, Artemis killing the girls, and Apollo the boys.

The Death of Amphion

Now it is commonly said that that Amphion committed suicide, falling upon his own sword, when he discovered that all of his children had been killed. Others though, tell of Amphion seeking revenge upon Apollo and Artemis, and the king of Thebes was thus said to have attacked the Temple of Apollo at Delphi, but was struck down by an arrow of Apollo before he could destroy it.

Subsequently, Amphion was buried in the same burial mound as his brother Zethus. After the death of Amphion, the vacant throne of Thebes was filled by Laius, the rightful king of Thebes.
Contents