tHE lOST cITY OF aTLANTIS

The legend of the “Lost City of Atlantis” is one of history’s most enduring myths; and from the words of one man, Plato, the story of the ancient city state, has grown.

Plato would tell of the destruction of the ancient superpower when Zeus was angered by the populace; and virtually ever since people have been trying to decide where Atlantis was. 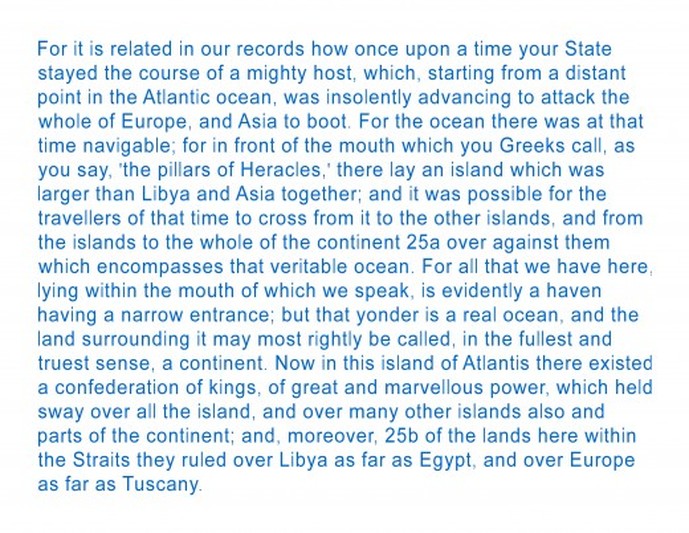 The basic pointers written down by Plato would suggest that the island of Atlantis was in the Atlantic Ocean (the Atlantic being the name given to the ocean by Herodotus 100 years previously); beyond the Pillars of Heracles (the Straits of Gibraltar); and was of a size larger than North Africa and Western Asia combined.

Most theories on the location of Atlantis tend to ignore one or more of these pointers; and it is common for theorists to suggest Plato used incorrect measurements or words. In particular, an argument is made that rather than meaning “bigger than” Libya and Asia, Plato meant “between”, the original words being “meson” and mezon”.

Ignoring the pointers of course gives rise to many popular locations for Atlantis.

Other Mediterranean Islands have also been put forward as possible locations for Atlantis, including the likes of Malta, Sicily, Cyprus and Crete. Whilst carved stone work has been discovered in the waters around Malta, it is Crete that is the most convincing location of the four.
Crete was the home to the Minoan civilisation that flourished from about 2000BC, a possible cause of the demise of this civilisation is put down to the eruption on Thera and a tsunami, highly suggestive with Atlantis being lost to the sea.

Crete, along with the other three islands, has the same problems as Santorini when it comes to possible locations of Atlantis, whilst being islands; they aren’t in the Atlantic, aren’t beyond the Pillars of Heracles and were not excessively large. 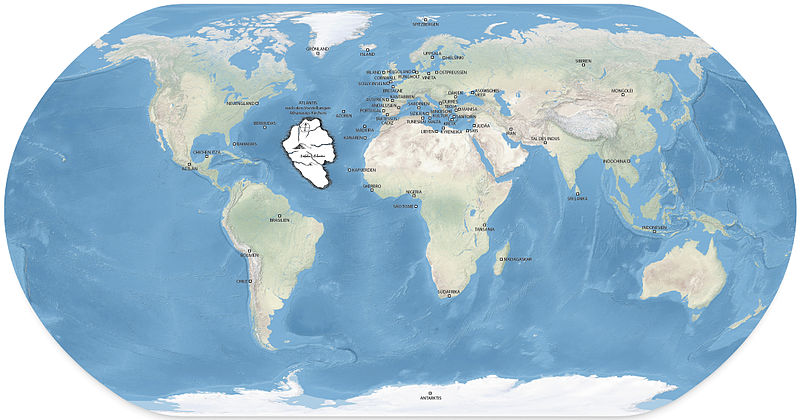 Other Possible Locations For Atlantis

As Atlantis is legendary, any location for the Lost City can be put forward, as it cannot be disproved. After all, with all of the Atlantean technology destroyed when the city was lost, who is to say what they would have been capable of.

Go beyond the Pillars of Heracles as Plato suggests and the whole Atlantic Ocean lies before one. The Atlantic Ocean comprises 40 million square miles of surface water, and even a large island could easily be hidden, submerged beneath 3000m of water.

Travel north from the mouth of the Mediterranean and places such as Great Britain, Ireland or a land mass in the Arctic Circle have all been put forward at one time or another as possible locations for Atlantis.

Travel south from the Pillars of Heracles, and eventually the Antarctic is reached; possibly, before it was covered in ice, the Antarctic might have been Atlantis.

Of course, if Antarctica is Atlantis, then the Atlanteans must have been capable of ocean going voyages, so possibly the continent of South America might be Atlantis. Certainly, in recent years, physical landmarks have been found which might be the same as those described by Plato; although this is hardly surprising given the size of South America.

Descriptions given by Plato of Atlantis can be matched to numerous places around the world; and so the probability is that no site will ever be confirmed as Atlantis, even if Atlantis is real. Any archaeological site would have to come complete with a sign saying “This is Atlantis”, otherwise doubts would always exist.