Automedon was a member of the Achaean forces who fought during the Trojan war. Automedon appears in Homer’s Iliad, as well as other ancient sources.

​Automedon might have just been a charioteer, but he was charioteer to one of the greatest Greek heroes, Achilles. It was thus Automedon’s job to yoke up Balius and Xanthos, the two immortal horses of Achilles.

Automedon might have been Achilles’ charioteer, but he also put the best interests of the Achaeans first, for when it appeared Achilles was going to do something rash for his love of Polyxena, Automedon would tell Patroclus and Ajax the Great so that they might keep an eye on Achilles. 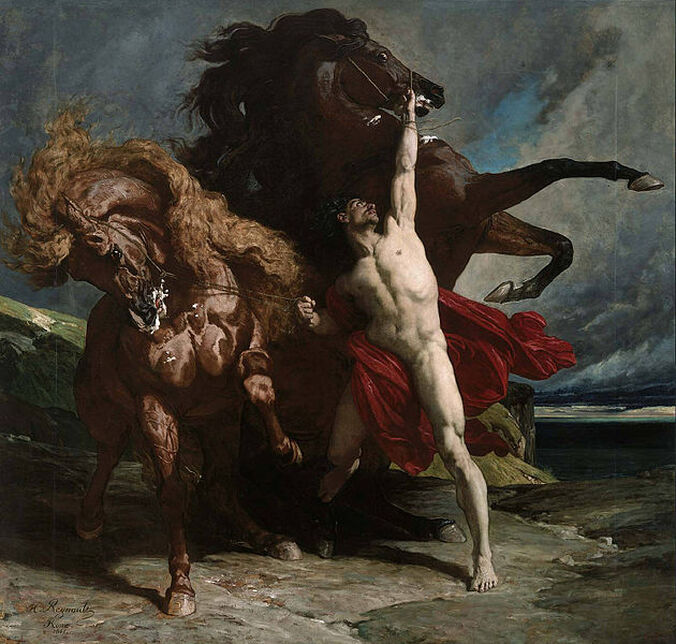 Automedon and Achilles chariot enter the battle again, and Automedon is able to kill Aretos, son of King Priam, with a spear to the gut; Automedon takes Aretos’ armour as a prize.

Later in the war, Automedon became the charioteer of Achilles’ son, Neoptolemus, and Automedon tells Neoptolemus, that the Deiphobus now facing them, was different to the man faced by Achilles previously, and must be imbued with courage from a god.

In Virgil’s Aeneid, Automedon is present during the sacking of Troy, fighting alongside Neoptolemus and Periphas as the enter the Palace of King Priam. Nothing more of Automedon is said though.
Contents
Colin Quartermain - Automedon - 26th August 2021