DANAUS AND THE DANAIDS IN GREEK MYTHOLOGY

Danaus was a king in Greek mythology, firstly a ruler of Libya, he would later become king of Argos, and the eponymous hero of the Danaan. The first of Danaus’ descendants were his daughters, the 50 Danaids.

In later mythology, the Danaids were also famous inmates of Tartarus, where they faced eternal punishment, although how they ended up in Tartarus is never made clear.

Aegyptus had also become a prolific producer of children for Aegyptus was said to have 50 sons by various wives.

Trouble occurred when Aegyptus decided to expand his kingdom, and he looked eastwards to the land of the Melampodes. This land was easily conquered by Aegyptus and his sons, and Aegyptus named the land after himself, Egypt. This land was nominally though part of the kingdom of Danaus, and the king of Libya was fearful about the might of Aegyptus and what further land he might lose.

Aegyptus then decided that his 50 sons should marry his 50 nieces, and so word was sent to Danaus to arrange the nuptials.

Fearful for himself and his daughters, Danaus decides to leave behind his kingdom. To make their escape, Danaus then designs and has built the largest ship to have been thus crafted; thus, Danaus and the Danaids depart Africa.

The Marriage of the Danaids

Aegyptus had not forgotten that he intended his sons to marry the Danaids though, and eventually the spies of Aegyptus located them in their new homeland. Aegyptus and his sons would thus also arrive in Argos.

Danaus now sought to avoid war, and it seemed that the King of Argos now agreed that his daughters should marry his nephews.

Lots were drawn to decide which Danaid would marry which son of Aegyptus, but Danaus was planning to double cross his brother. Danaus instructed each of his daughters to take a sword, and when their husband came to them, they were to kill them.

That night, all bar one of the Danaids followed their father’s wishes, and Aegyptus awoke to find that 49 of his sons had been decapitated during the night. The shock and grief was sufficient to kill Aegyptus.

The heads of the deceased sons of Aegyptus were subsequently buried in Lerna.

Danaus still had a problem to deal with, for now he had 49 unmarried daughters, and suitors were wary of the dangers that might be ahead if they married a Danaid.

Danaus did though manage to arrange partners for his daughters, for the king of Argos organised magnificent games, where the winners of the contests undertaken received a Danaid as a prize.

Two daughters of Danaus, Automate and Scaea would marry two sons of Achaeus, Architeles and Archander, and so the Danaans and Achaeans became mixed.

One daughter, Amymone did not marry in this manner, for she was ravished by Poseidon, who had rescued her from a Satyr. 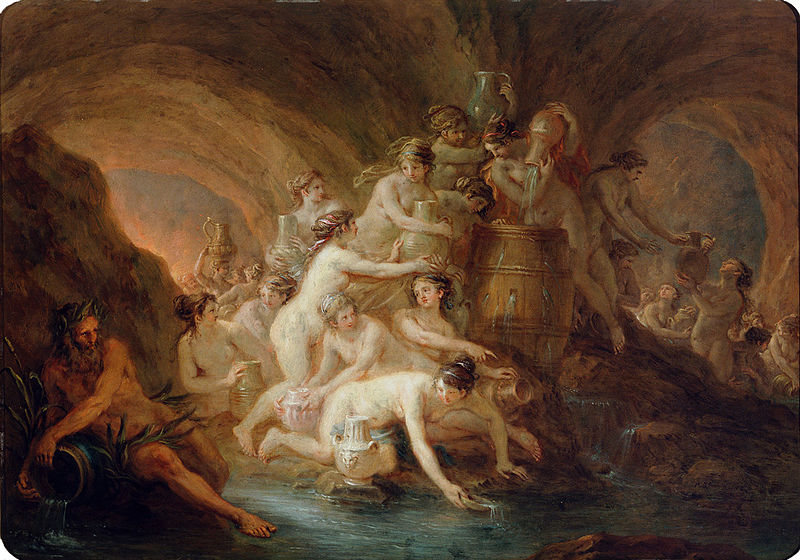