The same tales told of Hippomenes are also told of Melanion, which leads to the possibility that Hippomenes and Melanion were the same person, just given different names, although Melanion is commonly said to be the son of Amphidamas, rather than Megareus.

​Atalanta had returned to her home, and she now forsaked love, either because of the death of Meleager, or because of a prophecy that had been made about the consequences if she was to wed.

How to Marry Atalanta

Suitors would have to race Atalanta in a running race, and the one who could beat her in the race would marry her. There were though consequences for those who ran the race and lost, for they would be killed, and their head would be placed on a spike. It was commonly said that the suitors were given a head start, but if they were overtaken before the finish line then they had lost.
​
Now the thought of death dissuaded many potential suitors from trying to outrun Atalanta, but sill many also attempted to beat Atalanta, and all died in the attempt.

​Hippomenes would challenge Atalanta to a race. When Hippomenes feared that he was to be overtaken, he dropped one of the Golden Apples, and a distracted Atalanta, would stop to pick the apple up, before resuming running.

In this way, although it took all three apples, Hippomenes ended up winning the race, and the hand in marriage of Atalanta. 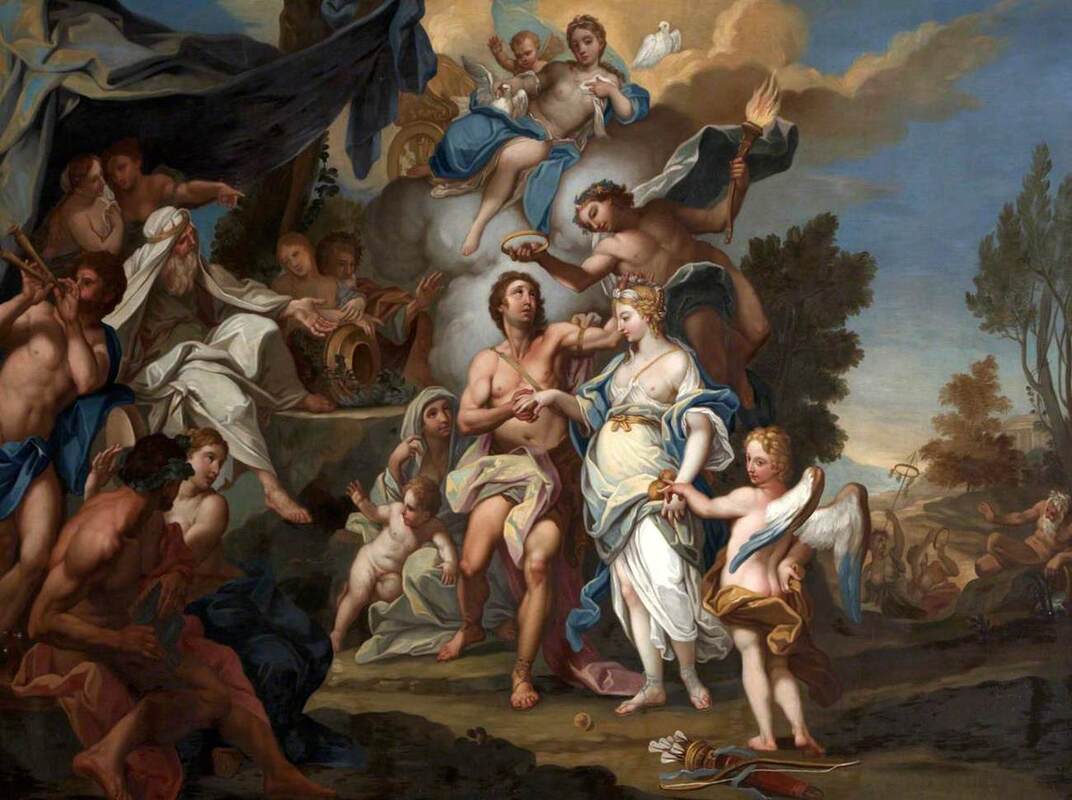 The Downfall of Hippomenes and Atalanta

​The marriage of Hippomenes and Atalanta was said to have brought forth a son, Pathenopaeus, who wold late become one of the Seven Against Thebes, although alternative parentage of Partheopaeus was often given.

Having won the running race, Hippomenes would forget to offer up the appropriate sacrifices to Aphrodite in recognition of her help.

Angered by the slight, Aphrodite would have her revenge, for she caused Atalanta and Hippomenes to become so impassioned that they had sex with each other, either in a temple of Cybele or Zeus.
​
This sacrilege caused Cybele or Zeus to turn Hippomenes and Atalanta into a lion and lioness, some say this occurred because it was thought that lions mated with leopards rather than other lions, although it is also said that the Ancient Greeks did not necessarily distinguish between large cat species, calling all large cats lions.
Contents
Colin Quartermain - Hippomenes - 17th February 2020
hippomenes melanion, hippomenes atalanta, hippomenes race, hippomenes greek mythology