Thersites was a soldier or hero of the Achaean forces during the Trojan War. Thersites is most famous today for his appearance in the Iliad, in which Homer has him as a relative comic character who is bow-legged and outspoken.

​In the Iliad, Homer makes no mention of the family line of Thersites, which has given rise to the possibility that Thersites was a common soldier in the Achaean army.

The activities undertaken by Thersites during the Trojan War though tell of a noble standing, and so ancient writers made Thersites a son of Agrius; Agrius being a son of Porthaon and therefore brother to Oeneus, King of Calydon.

Thersites, as a son of Agrius, was said to have had five brothers, Celeutor, Lycopeus, Melanippus, Onchestus and Prothous; and Thersites and his brothers are famous for their role in the overthrow of Oeneus.

​Thersites and the Overthrow of Oeneus

​The Words of Thersites

​It is not necessarily for his appearance that Thersites is remembered for he has been described as insubordinate and one who made use of vulgar and obscene language and in doing so has become known as the voice of the common soldier in the Achaean ranks.

As the Trojan War dragged on, Agamemnon decides to test the resolve of his men, and makes a speech indicating that he was willing to give up on the war, but once the speech is given a good proportion of the Achaean army depart for the ships in the belief that they were about the return home.

It is left to Thersites to put into word what many of the common soldiers were thinking. For as the war has dragged on the men had died and suffered, whilst Agamemnon had gotten a great deal richer with looted gold and beautiful women as his concubines.

The words spoken might well be the truth, and what many were thinking, but any army only works because of discipline; and so Odysseus interacts to strike down Thersites and end the argument about returning home.

Odysseus does literally strike Thersites down with the sceptre of Agamemnon, and threatens to strip him naked and thrash him if there was any more insubordination from him. The striking down of Thersites brings the army together, for they now all laugh at the prone Thersites, as he wipes tears of pain away, although this doesn’t diminish the fact that the words of Thersites were effectively true. 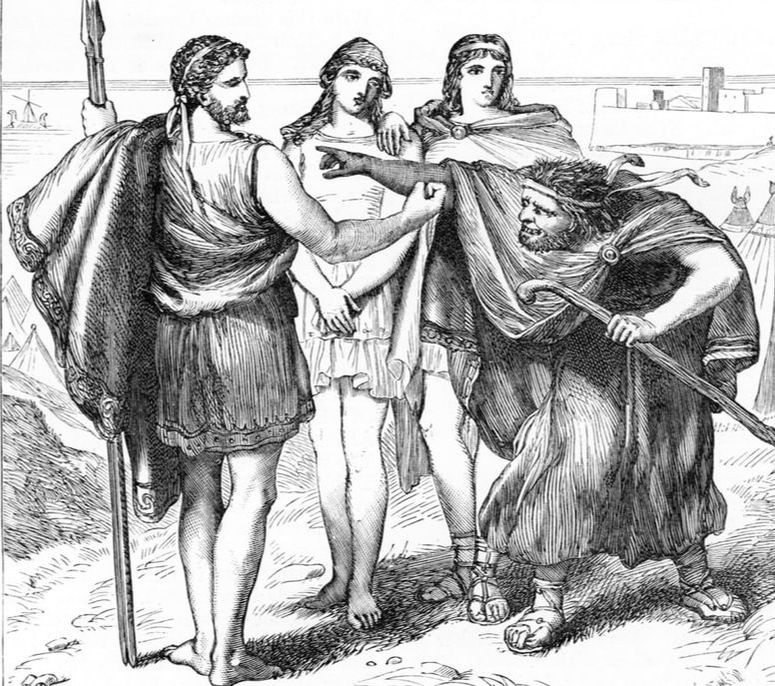 ​The Death of Thersites

​Thersites in the Underworld

It was not just in the written word that the story of Thersites was told, for Thersites also appeared on the reliefs of ancient pottery. One vase painting attributed to Polygnotos of Athens, shows Thersites in the Underworld alongside Palamedes and Ajax the Lesser, the three Achaeans playing dice together.

Palamedes, Ajax the Lesser and Thersites being linked together as they were all antagonists of Odysseus within the Achaean camp.
Contents
Colin Quartermain - Thersites - 5th May 2018