Athamas was the name of Greek mythological king, a ruler of a kingdom in Boeotia, and then one in Thessaly. The life of Athamas though was not a universally happy one, and was filled with much tragedy. ​

​Athamas was the son of Aeolus, the king of Thessaly, (not Aeolus, king of the winds) and his wife, Enarete. Athamas was thus brother to Cretheus, Salmoneus and Sisyphus, amongst others, and a number of sisters.

Each of the sons of Aeolus would come to rule their own kingdoms, and in the case of Athamas, his kingdom was that of Orchomenus in Boeotia.

​The First Wife of Athamas

​Athamas is primarily remembered for his troubles, much of which seemed to derive from the fact that he was thrice married.

The first wife of Athamas was the Oceanid cloud nymph Nephele; and by Nephele, Athamas would become father to a son, Phrixus, and a daughter, Helle.

​A drought would hit Boeotia, and famine spread across the land, some blame this on a vengeful Nephele, whilst others say there was no drought, simply a ruse enacted by Ino.

In either case the drought allowed Ino to plan the removal of Phrixus as heir to Athamas’ throne, and put her own sons in prime position.

Ino would bribe heralds of Athamas, so that when they returned from the Oracle of Delphi, they would tell of how the drought could only be lifted through the sacrifice of Phrixus.

When the populace of Orchomenus heard the “proclamation” of the Oracle they demanded that Athamas sacrifice his own son. Ultimately, Athamas would not have to sacrifice Phrixus, because before the sacrifice could take place, Phrixus and Helle were flown to safety on the back of the Golden Ram; the magical animal having been sent to undertake the rescue by Nephele.

Even without the sacrifice, Ino had what she wanted for Phrixus was out of the way; indeed he was far away in Colchis.

Some tell of Athamas finding out about conniving of Ino shortly after the flight of the Golden Ram, and killing her as a result; other tales though tell of Athamas living on in ignorance allowing for many more trials and tribulations for the king.

​It was around the time when Athamas was ruler in Boeotia that Zeus seduced Semele, with the result that Semele would fall pregnant with a son, Dionysus. The interference of Hera ultimately saw Semele die, and Zeus having to carry Dionysus to term, with his son sown up in the god’s thigh. 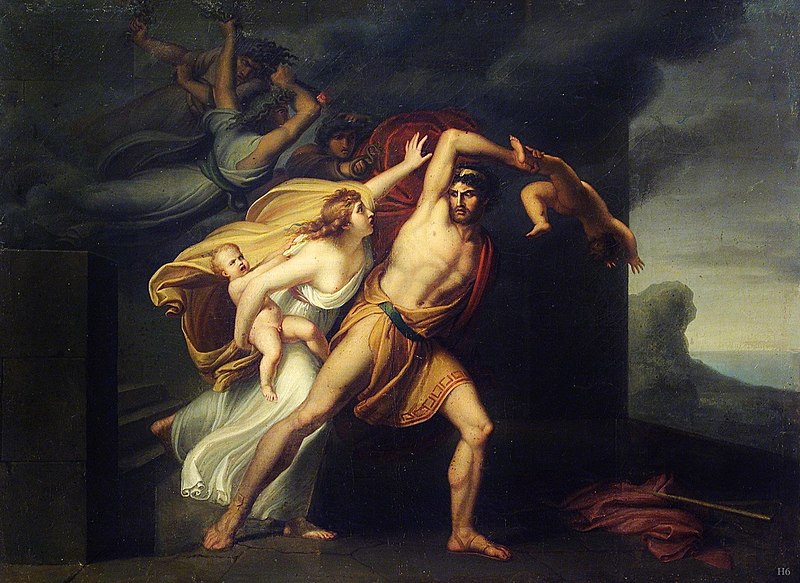 Athamas Taken by The Furies - PD-art-100

The Family of Athamas Extended

​The madness that had taken Athamas would eventually dissipate, and now finding he had no heir to his kingdom, Athamas adopted his grandnephews Coronus and Haliartus, grandsons of Sisyphus, and regions of Boeotia called Coroneia and Haliartus were named after these relatives of Athamas.

​It was said by some that at some point in the life of Athamas in Boeotia, his own people sought to sacrifice the king to Zeus. Possibly through the belief that the king had killed Phrixus, although this was what the populace had desired at the time.

The sacrifice though was said to have been stopped by the arrival of Cytissorus in Boeotia; Cytissorus was the son of Phrixus, and thus grandson of Athamas, and it was Cytissorus who informed everyone that Phrixus was alive.

To this end, it was said that Athamas discovered that his second wife, Ino, and children, were not dead, and so brought them from Boeotia to Thessaly.

This only aroused the jealousy of Themisto, who now, just as Ino had tried to do away with her predecessor’s children, sought to kill the sons of Ino and Athamas.

Themisto decided this was a deed best done at night, and so ordered a slave to dress her own children in white and those of Ino in black so that they could be identified in the gloominess of night. Unbeknownst to Themisto the slave who she asked to undertake the task was Ino, and seeing a deadly plot in the eyes of Themisto swapped the coloured clothing around.

As a result Themisto killed her own sons, whilst leaving those of Ino and Athamas alive. When, in the morning, Themisto realised she had killed the wrong children, the third wife of Athamas killed herself.
Contents