A TO Z OF GREEK MYTHOLOGY

Iphigenia is a famous female character from the tales of Greek mythology. A daughter of King Agamemnon, Iphigenia was put on the sacrificial altar by her father, to appease the goddess Artemis.
A less common version of the story of Iphigenia gives different parentage for the girl, for then it is said that Iphigenia was in fact the daughter of Theseus and Helen, born when the Athenian hero had abducted Helen from Sparta. Helen had subsequently given her daughter to her sister Clytemnestra, who had raised it as her own.

Iphigenia and the Prophecy of Calchas

​It was the seer Calchas who told Agamemnon that the goddess Artemis was angered by one amongst the Achaean army. That one normally said to be Agamemnon, and for that reason Artemis had decided to keep the Achaean fleet at Aulis.

Various reasons are given why Artemis might have been angered, but commonly it was said that the hubris of Agamemnon, comparing himself with the hunting skill of the goddess, was to blame.

It was also Calchas who told Agamemnon the method by which Artemis could be appeased, a sacrifice was required, but not a normal one, a human sacrifice, and the only suitable victim was to be Iphigenia.

The Sacrifice of Iphigenia

​With a sacrificial altar constructed, Iphigenia would have been very aware of what was to befall her, but most ancient sources tell of Iphigenia willing climbing onto the altar, believing that her death was necessary, and it would become known as a heroic death.

A problem did arise when it came to who was going to sacrifice Iphigenia, for none of the assembled Achaean heroes were willing to kill the daughter of Agamemnon. Eventually it was left to Calchas, the man who had said that the sacrifice was necessary, to kill Iphigenia, and so the seer wielded the sacrificial knife. 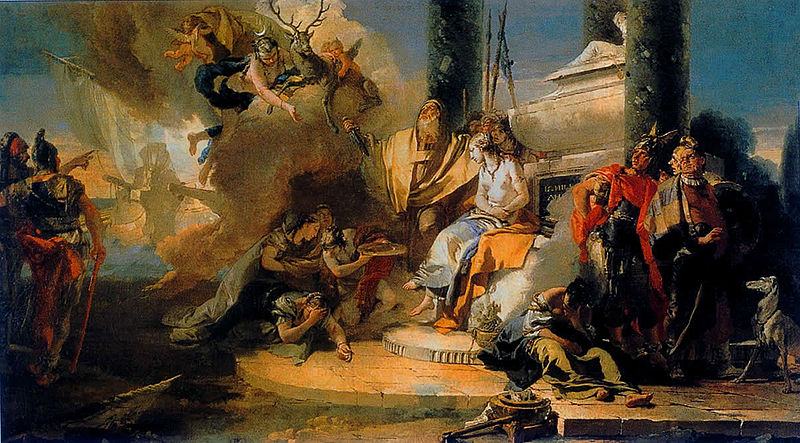 ​In the simplest versions of the Iphigenia myth, Iphigenia’s life came to an end by Calchas’ knife, but few human sacrifices ended as they were supposed to in Greek mythology. For, even in the case of Pelops, the son of Tantalus was brought back to life, after he had been killed by his father.

Thus it became common to say that in the end Iphigenia was not actually sacrificed, and as Calchas brought down the knife to kill the daughter of Agamemnon, the goddess Artemis intervened, spiriting Iphigenia away, and substituting a deer in the girl’s place. Artemis though ensured that all those who witnessed the sacrifice of Iphigenia, did not recognise that a substitution had taken place.

After the sacrifice had been performed though, the ill winds that had kept the Achaean fleet at Aulis abated, and the journey to Troy could begin.

Deadly Consequences of the Sacrifice of Iphigenia

​Thus, a helpless Agamemnon was killed by Clytemnestra and Aegisthus as he took a bath.

​It was only after the death of Agamemnon that the story of Iphigenia re-emerged in Greek mythology, with Iphigenia appearing in the tale of her brother, Orestes.

When Artemis had substituted the deer for Iphigenia, the goddess had transported the daughter of Agamemnon to the land of the Tauri, a land normally equated with modern Crimea. Artemis then appointed Iphigenia as the priestess of the goddess’ temple in Tauris.

Having escaped from becoming a human sacrifice, Iphigenia now found herself in charge of undertaking them, for the Tauri, sacrificed all strangers to their land.

​The letter written by Iphigenia proved to be the key to brother and sister recognising each other, and so a new plan was put into operation, and with Iphigenia’s knowledge, Iphigenia, Orestes and Pylades were soon on-board Orestes ship, leaving Tauris, with the statue of Artemis in their possession.

Iphigenia Back in Greece

​After her death, it was said that Iphigenia was a resident of the White Island, or Isles of the Blessed, the equivalent of paradise in the Greek afterlife. It was also commonly said that in the afterlife Iphigenia was wed to Achilles, and thus the promise which had seen her delivered to Aulis came to fruition.
Contents