The Seer Melampus in Greek Mythology

​Melampus was one of the pre-eminent seers spoken of in Greek mythology. Melampus was said to be able to discern the words of animals, as well as being a noted healer.

Melampus was the son of Amythaon, son of Cretheus, born to Amythaon’s wife, Idomene, daughter of Pheres. Melampus was thus brother to Bias and Aeolia.

Amythaon’s father, Cretheus, had founded Iolcus, but Amythaon’s home was Pylos, though it is not clear whether Amythaon had moved there, before or after Pelias had usurped Aeson (Amythaon’s brother) as King of Iolcus.

Alternatively, Melampus discovered a snake dead beneath a cartwheel, leaving behind two baby snakes. Melampus gave the deceased snake a burial, and then raised the orphaned snakes himself. The snakes he raised then licked his inner ears clean, giving Melampus powers of prophecy, and the ability to converse with animals.

Neleus, King of Pylos, had a beautiful daughter called Pero. With a large number of suitors, Neleus decided that he would only give his daughter in marriage to the man who could bring him the cattle of Phylacus; Phylacus being a king of Thessaly.

Bias, brother of Melampus, wished to marry Pero, and so Melampus agreed to get the cattle for him, though Melampus already knew that he would face hardship in doing so.
​
Thus it was that Melampus was caught trying to steal Phylacus’ cattle. Thrown into a prison cell, Melampus then heard worms talking about the amount of the roof that they had already eaten through. Melampus then demanded that he be moved to a different cell. When, shortly afterwards, the cell roof collapsed, Phylacus recognised that he had an extraordinary seer in his kingdom, and the king ordered Melampus’ release.

There is some generational confusion about events in Melampus’ life, for a famous tale tells of him curing the Proetides, the daughters of King Proetus, of their madness.

The daughters of Proetus had been sent mad by Hera, after they had insulted the goddess. The Proetides thereafter roamed the countryside pretending to be cows.

Melampus was called upon the cure the Proetides, but in return, the seer demanded one-third of Proetus’ kingdom. Proetus considered this too high a price, and sought someone else to cure his daughters. Non-one else could cure the Proetides though, and when other women of the kingdom also went mad, Proetus agreed to Melampus’ demand. Now though, Melampus demanded more, requiring a third of Proetus’ kingdom for himself, and a third for his brother Bias.
​
Proetus, this time agreed, and the mad women were driven to a religious sanctuary (various places dedicated to various deities have been named in the surviving sources. Although Iphinoe died before getting to the sanctuary, Melampus came up with a drug to cure the other Proetides and any other women who had been sent mad. 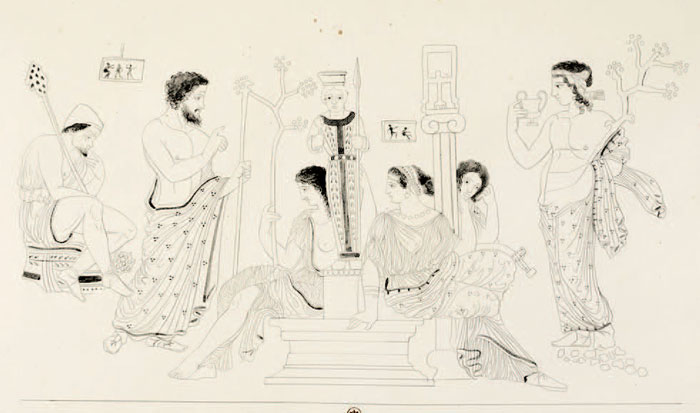 ​Melampus and the Women of Argos

​This version of the story though, tells of the women of Argos collectively going mad, having been cursed by Dionysus. It was thus, Anaxagoras who refused to pay Melampus with a third of his kingdom, but then had to agree to pay two-thirds, when the women of Argos could not be cured by anyone else.

This it was that Argos was divided into three, with three rulers, Melampus, Bias and Anaxagoras (and then Alector, Anaxagoras’ son).

The Family Line of Melampus

​Melampus was said to have married Iphianira, one of the Proetides that he had previously cured. Various children are named of Melampus, but the most prominent were the sons, Antiphates, Mantius and Thiodamas. Antiphates would succeed Melampus as king of that portion of Argos.

The family line of Melampus contained many famous seers, for aside from Thiodamas, this line also included Amphiaraus, Polypheides and Theoclmenus.
​
The family line of Melampus, as rulers of a section of Argos, continued to the Trojan War, when Amphilochus was on the throne, after which the whole kingdom of Argos was reunited under Cylarabes, a descendant of Anaxagoras, whom Melampus had previously shared the kingdom with.
Contents
Colin Quartermain - Melampus - 28th January 2020