In Greek mythology, Creon was the ruler of Thebes, although Creon would not be named king, but would act as regent on several occasions, including either side of the rule of Oedipus.

The FAMILY Line of Creon

Creon was the son of Menoeceus, although his mother goes unnamed, but the ancestry of Creon can be traced back to the very founding of Thebes, for Menoeceus was the grandson of Pentheus, who himself was the son of Echion, a Spartoi, and Agave, a daughter of Cadmus.

Through Menoeceus, Creon was brother to Hipponome and Jocasta, and thus, when Jocasta married Laius, Creon became brother-in-law to the king of Thebes.

The First Rule of Creon

​Amphitryon wanted additional help from Creon though, for he needed Theban troops for an expedition against Taphos, but before aiding Amphitryon, Creon asked for something in return.

Because of the quandary brought about by these two animals, Zeus had both turned to stone, so Creon now had what he wanted, a land free from the Teumessian Fox.

As a result, Creon provided an army to Amphitryon, who then conquered Taphos.

Having got rid of one beast though, Creon was soon tasked with getting rid of another, for at that time the Sphinx arrived in the kingdom, to ravage the land, and kill those who could not answer her riddle.

Creon sought guidance about how to deal with the Sphinx, and the Oracle proclaimed that Creon should give the throne of Thebes to the man who could solve the Riddle of the Sphinx.

Many died trying to solve the Riddle of the Sphinx, until one day Oedipus arrived in the city, and successfully answered the question posed. At the time Oedipus did not realise that he had killed the previous king, Laius, nor did he know that Laius was his father and Jocasta his mother.

Therefore, Creon heeded the words of the Oracle, and Oedipus was named king of Thebes, and Creon gave the widow of Laius, Creon’s sister Jocasta, to the new king to be his wife.

The FAMILY of Creon

​Creon himself was married to a woman named Eurydice, and Creon would become father to a number of offspring; including Haemon, Henioche, Lycomedes, Megareus, Menoeceus and Pyrrha. The most famous child of Creon though, was a daughter named Megara, for Megara was the first wife of Heracles.

Creon would give Megara to Heracles after the hero successfully ended the annual tribute that Thebes paid to the Minyans of Orchomenus via success on the battlefield.

Creon would give one of his other daughters in marriage to Iphicles, the half-brother of Heracles.

The Downfall of Oedipus

As war commenced the Thebans were at a disadvantage but Creon was tasked by Eteocles on how Thebes could be victorious, and so Creon sought the advice of the seer Tiresias. The advice was not what Creon wanted to hear though, for Tiresias proclaimed that Thebes would only be victorious if Menoeceus, the son of Creon was sacrificed.

Creon contemplated sending Menoeceus away, but Menoeceus himself took matters into his own hands, sending his own sword through his own throat.

The self-sacrifice seemed to work for Thebes did indeed come out victorious in the war, although the war itself ended with Eteocles and Polynices killing each other.

The death of Eteocles would see Creon become ruler of Thebes for a second time, acting as regent until the son of Eteocles, Laodamas, was ready to rule. 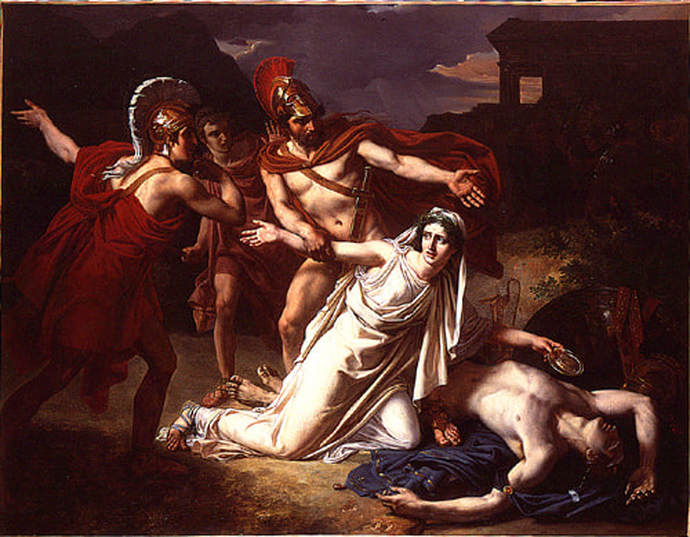 The Death of Creon

Some also tell of how Creon’s unjust law also led to the death of the regent, for word reached Athens and Theseus. Theseus demanded that the law be cancelled, but when Creon refused, Theseus marched forth with a powerful Athenian army.

Undaunted Creon met the Athenian army with his own, but during the fight Theseus and Creon met, and in such a fight there could be but one winner, and so Creon lost his life.

Others tell of how this was not the moment of Creon’s death, and that faced with Theseus and the Athenian army, Creon renounced his previous law, and so further bloodshed was avoided. Creon though would not live for much longer, for a man called Lycus saw his chance to seize the throne of Thebes, and Creon was thus murdered by the usurper.

Heracles would soon kill the murderer of Creon, and Laodamas was put on the throne of Thebes, but he too was soon overthrown when the Epigoni came to Thebes, and Thersander, son of Polynices became king.
Contents