Jocasta was a queen of Thebes, twice, in Greek mythology but is famous not for her regal position but for the actions of others that doomed her, as was the want in Greek tragedy.

Jocasta was born in the Greek city of Thebes, the city founded by Cadmus, and indeed the lineage of Jocasta could be traced back to Cadmus, and also the Spartoi, Echion, thus, Jocasta was part of the ruling class of Thebes.

More directly, Jocasta was the daughter of Menoeceus, making her sister to Creon and also Hipponome.

Alternatively, the oracle told Laius that Thebes would only be saved if the king did not have a son.

Thus, Laius abstained from sleeping with his wife, but one night, when Laius had drunk more than his fair share, Jocasta slept with her husband, and as a result a son was conceived.

Jocasta Gives Up Her Son

When Jocasta gave birth to a baby boy, the Queen of Thebes gave him over to Laius, who fearful of the oracle, decided to have abandoned, exposed on an isolated part of the countryside. The son of Jocasta and Laius was therefore given to a herdsman to do the deed, but first Laius pierced the ankles and feet of the boy with spikes.
​
The herdsman, Menoetes, instead of abandoning the child upon Mount Cithaeron, passed the son of Jocasta onto another herdsman, whose master was King Polybus of Corinth. Polybus and his wife Periboea were themselves childless, and the pair raised the boy as their own. The boy was given the name Oedipus because of the injuries to his feet.

Oedipus would grow up as a prince of Corinth, but when rumours placed doubt in his mind about Polybus and Periboea being his parents, Oedipus sought the counsel of an Oracle to learn the truth.
​
The news given to Oedipus was that he was bound to kill his father and marry his own mother, and so wishing to do no harm to Polybus and Periboea, Oedipus left Corinth.

Jocasta would become mother again, for she bore to the new King of Thebes four children, two sons, Eteocles and Polynices, and two daughters, Antigone and Ismene.

The killing of the Sphinx did not end the troubles of Thebes though, for famine and plague descended upon the city.

Tiresias proclaimed that the plague was due to the city’s guilt over the death of the former king Laius, but this plague could be lifted if someone willing died for the city.

Menoceus, the father of both Jocasta and Creon, heard the words of Tiresias, and threw himself from the city walls, sacrificing himself to lift the plague from the city.

The End of Jocasta 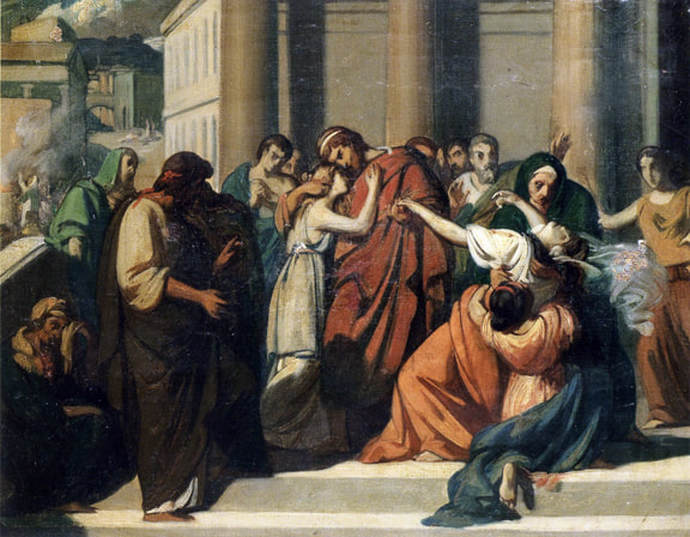