Laius was a legendary king of Greek mythology. The ruler of the city of Thebes, Laius would become father to a single son, a son who would become known as Oedipus, a son who caused the downfall of Laius.

Laius was a son of Labdacus, grandson of Polydorus, and great-grandson of Cadmus, and thus born into the ruling family of Cadmea, as the city of Thebes was then known.

Now Laius should have assumed the throne of Cadmea, but his position was usurped by Amphion and Zethus, who co-ruled Cadmea, and renamed the city Thebes.

​Laius would be sent into exile, and found welcome in the Peloponnesus, and the royal court of King Pelops.

It was said that Laius would then fall in love with the illegitimate son of Pelops, Chrysippus.

Some tell of how Laius would abduct Chrysippus, but when caught by Atreus and Theyestes, the sons of Pelops, Laius was not punished by King Pelops, for Pelops recognised that Laius had acted out of love.

Others tell of how Laius was framed for the death of Chrysippus, by the wife of Pelops, Hippodamia. Hippodamia feared that Chrysippus would succeed Pelops to the throne rather than one of her sons, and so stabbed the illegitimate son of her husband, using a sword owned by Laius. The stab wound die not cause immediate death, and Chrysippus was able to exonerate Laius before he died.

Now for a while, Laius abstained from having marital relations with his wife, but under the influence of wine, this policy of abstention waned; and Laius would sleep with Jocasta.

Inevitably, Jocasta became pregnant, and after the allotted time gave birth to a baby boy.

The Son of Laius Exposed

​Fearing the words of the prophecy, Lauis decides to expose his new-born son, and after piercing the ankles of the boy with spikes, gives the boy to one of his herdsmen, with orders that the boy should be left upon Mount Cithaeron.

Now as was the way in Greek mythology, the baby did not die, but was either given to, or was found, by a herdsman employed by King Polybus of Corinth, who took the boy back to his master. Polybus and his wife, Periboea, were childless, and Periboea cared for the child as if it was her own, and because of his damaged feet, the king and queen called “their” new son Oedipus.

Oedipus travelled onwards not knowing how he had killed, and Laius died, not knowing who had killed him, but prophecies were coming to pass, for Laius had indeed died at the hands of his son.

Some tell of Laius being buried at the point where he fell upon the Cleft Way, for the body was said to have been discovered by King Damasistratus of Plataea, and so news of King Laius’ death would eventually reach Thebes, but with no word of who had killed him; with the truth only finally emerging years later, during the reign of Oedipus. 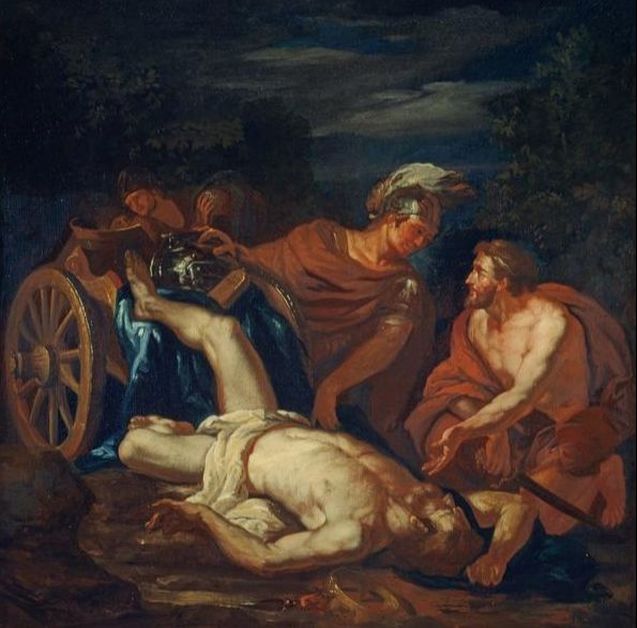