The figure of Medea is one of the most famous female characters to appear in the tales of Greek mythology; for Medea was a central figure of the quest of the Golden Fleece, and the adventures of Jason and the Argonauts.

​Medea appears in the majority of the most famous ancient sources, including Argonautica by Apollonius Rhodius, Histories by Herodotus, Theogony by Hesiod, and Metamorphoses by Ovid. There were also several plays in antiquity dedicated to Medea, including Medea by Euripides.

In the time when Medea was first talked of, the land of Colchis was at the furthest eastern extreme of the known world, a land of mystery and the uncivilised.

Stories told of how Aeetes, who himself had originally come from Corinth, had transformed from a welcoming host, to one who strangers to death, after the arrival in his kingdom of Phrixus and the Golden Fleece. The transformation having occurred for it had been told to Aeetes that he would lose his kingdom if he allowed the Golden Fleece to leave Colchis.
Aeetes would set Jason a number of deadly tasks to ensure that the Golden Fleece remained in Colchis, but with each task, Medea would come to the aide of Jason.

Thus, Medea helped Jason to yoke the fire breathing bulls of Aeetes, providing the Greek hero with a potion to prevent him from being burnt. Medea also told Jason how to ensure that the Spartoi, the warriors born from sown dragon’s teeth, killed each other, rather than Jason; and finally, it was Medea who put the Colchian dragon to sleep ensuring Jason could remove the Golden Fleece from its perch.

Now a princess going against her father normally ended with the death of the daughter, as was the case with Scylla, daughter of Nisos, and Comaetho, daughter of Pterelaos, but in the case of Medea this was not the case, and Medea left Colchis on-board the Argo.

Now for most people this would be where the story of Medea ends, for this is where the story does finish in Jason and the Argonauts the 1963 Colombia Pictures film, but this is but a fraction of the tale of Medea, and the story of the Colchian princess gets a lot darker in content.

​It was also said that Jason kept his promise to Medea on the return journey, with Medea and Jason being married. The marriage of Medea and Jason was said to have occurred upon the island of Phaeacia, which at the time was ruled by King Alcinous. The Colchian fleet had once again caught up with the Argo, but as Queen Arete had married Medea and Jason, Alcinous would not give the pair up, and so the fleet of King Aeetes returned home, empty handed.

Medea and the Death of Pelias

Medea and Jason in Corinth

Jason and Medea would not benefit from the death of King Pelias, for Acastus, the son of Pelias succeeded his father to the throne. Despite Medea being responsible for the death of Pelias, she could not be tried for murder, for it was Acastus’ own sisters who had done the deed. But, Acastus did exile Medea and Jason, forbidding them from returning to Iolcus.

Medea and Jason would make a new home for themselves in Corinth, a city where they stayed for perhaps as long as 10 years.

Medea would give birth to a number of children by Jason, anywhere from two to six children.

Still, Medea and Jason were not to live out their lives happily in Corinth.

​Medea developed a deadly potion and then covered a robe with this poison, before secretly sending this robe to Glauce. Taken by the beauty of the robe, and of course unaware of its deadly covering, Glauce put the robe on, but immediately poison soaked into her skin, causing her to cry out in pain.

King Creon heard the screams of his daughter, and attempted to remove the robe, but in grabbing hold if it, Creon killed himself for poison also started to race through him.

Having killed Jason’s intended, Medea now to sought to inflict more pain upon Jason, for it was said that the Colchian sorceress killed her own sons, Memerus and Pheres; some say the other children, bar Thessalus, met the same fate, although it is not clear in ancient text.

Now some tell of how Medea did not commit filicide, with the death of Medea and Jason’s children be undertaken instead by the people of Corinth in revenge for the death of their king.

Nevertheless, Medea would now flee from Corinth without Jason, and some tell of how she called forth a chariot pulled by two dragons to aide her escape. 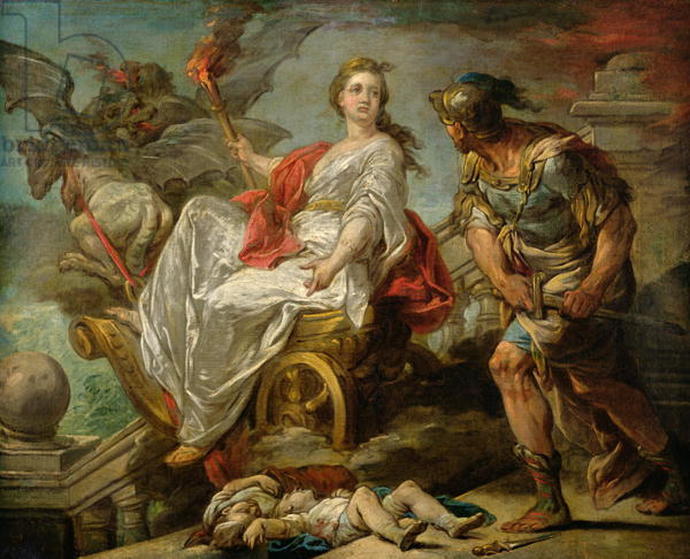 ​Medea was said to have travelled to Athens, which at the time was ruled by King Aegeus.

Aegeus has desperately tried to produce a male heir for many years, in order that he could pass on the Athenian throne to his son. Medea would work on this desire of King Aegeus, and very quickly Medea and Aegeus would wed, for the sorceress had promised that a male son would be forthcoming.

Medea would keep her word, for Aegeus was subsequently said to have become father to a son, Medus; although some claim that Medus was a son of Jason, conceived before Medea’s flight from Corinth.

Medea might have been queen of Athens, but there was to be no respite, for Aegeus had previously fathered a son, Theseus, although the king was unaware of the fact.